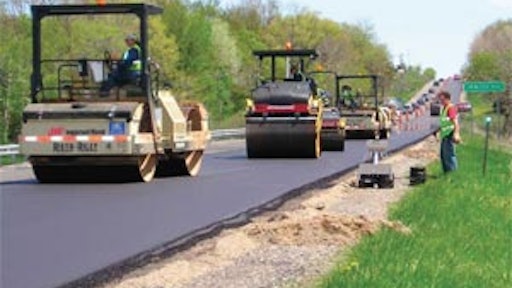 Indiana-based Rieth-Riley is accustomed to adapting to challenges as they arise when a project is underway, and that proved to be the case when the company's Houghton Lake, MI division reconstructed a portion of U.S. 10 this past summer.

The approximate eight-mile stretch of two-lane highway required joint repair, cold milling and a new hot-mix asphalt overlay. The project was divided into two sections, east and west of the Village of Lake. Pavement joint and crack repair of the underlying concrete road required full-depth removal of some sections, which were then replaced with 6,415 tons of HMA.

Following the joint and crack repair, the contractor milled approximately 111,536 yards of old asphalt off the road in preparation for repaving. Before the initial leveling course could be applied, Rieth-Riley's paving crew had to place some asphalt wedging along various locations in the road to establish a correct profile to the structure.

Since it was a two-lane road, an intensive traffic control management program was required to minimize disruptions to motorists.

The original contract called for paving placement to extend beyond the 12-foot-wide travel lane onto the five-foot-wide shoulder. As Larry Bushong, project manager, recalls, the east section of the project proved to be a real eye opener when trying to achieve density specifications on the shoulder portion of the roadway.

"The original contract called for trenching out the shoulders a 1/2-inch deeper than the road surface after milling," Bushong says. "It was believed that the added thickness would provide enough structure when the new mat was placed across the travel lane and shoulder area. Unfortunately, when the shoulder was milled out in many places it was milled all the way down to a sandy subbase. There was just nothing there. There was no rigid structure underneath the shoulder."

On the first half of the project, Bushong's crews had to trench deeper in many areas to establish more compacted structure to the shoulder before the leveling course could be placed.

On the west portion of the project, the contractor convinced the Michigan Department of Transportation to approve a change in order to trench out the shoulder three inches below the milled surface of the travel lanes and then place three inches of 2C HMA to create a more substantial subbase before applying the leveling and surface courses.

Along with the shoulder challenge, the project presented restrictions on when and how much of the roadway could be under reconstruction at any given time.

"We couldn't have a milled section open more than three days. We had to place the first leveling course fairly soon after a section of the road was milled," Bushong says. "Basically, what we were capable of paving in a week (a four-day work week) is all that we could allow our subcontractor to mill. We generally were able to mill and pave a two-mile stretch each week and that's about as fast as we could go with the additional work required to fix the soft shoulders.

"We were somewhat restricted by when we could work on the project," Bushong adds. "We had to be off the project by a certain time on Fridays, and we couldn't have more than two closures that were no longer than two miles on a section of the road and there had to be a mile of unrestricted traffic in between those closures. And since the project was divided in half, with each half approximately four miles long, it was difficult to set up work zones within the confined project length."

With specification changes on the west portion of the project to address the soft shoulder conditions, Rieth-Riley received an extension to complete the job.

"We were only assessed a minor completion penalty for finishing the project one day beyond the extended completion date," Bushong says. "But we also picked up some incentives for improving the ride quality (smoothness) of the road.

Without MDOT's approved change order to trench the shoulder and add three inches of the 2C mix, it would have been difficult to achieve the required density specifications. The change, which covered the cost of 4,000 tons of 2C mix and time to trench and reconstruct the shoulder, added approximately $100,000 to the original $2.75 million contract.

"With the shoulder compaction problems we experienced on the east portion of the project and the time it took to correct those problems, the change on the west portion was the only way to properly address the issue," Bushong says.

Since the project was a PWL (percentage within limits), mix designs, compaction densities and ultimate ride quality all had to fall under MDOT's standard project specifications for highway reconstruction.

According to Bill Adair, quality control supervisor for Rieth-Riley's Houghton Lake operation, the state's specifications are more disincentive than incentive in nature, designed to hold paving contractors accountable for achieving the acceptable quality parameters established by the DOT. Ride quality on this particular job was subject to an improvement of at least 40 percent.

Rieth-Riley achieved a 55 percent improvement. Any bump or dip that was greater than .3 inches had to be corrected. There were only four such deviations to correct on this particular job. Using the ride quality index to mathematically determine the project's smoothness, with zero representing a perfectly smooth surface and 100 representing an extremely rough surface, Rieth-Riley achieved an overall 24.81 RQI.

"When we performed test strips on the east portion of the project, we weren't achieving the density specs we wanted to achieve with the soft shoulder subbbase," Adair says. "The ‘blow' sand under the shoulder pavement was not allowing us to compact the new leveling course to the density requirements we had to meet. Once we convinced the DOT that we had to trench out the shoulder and replace it with three inches of the 2C mix (one-inch aggregate), we were then able to hit our density numbers."

On the 4E3 (3/4-inch maximum aggregate) intermediate leveling course and the 5E3 (1/2-inch maximum aggregate) wearing course, both containing 5.3 percent of PG 64-28 asphalt binder, density and smoothness specifications were achieved on the travel lanes and the shoulders once the subbase conditions were corrected. The intermediate mix design contained 16 percent reclaimed asphalt pavement and the wearing course contained 10 percent RAP.

Rieth-Riley's paving crew used a Blaw Knox 5510 track paver to place the 2-inch leveling and the 1 1/2-inch wearing course. Because of the long 55-mile haul from Rieth-Riley's Roscommon asphalt plant, Bushong had to establish an aggressive rolling pattern to achieve density before the mix cooled. He used two Ingersoll-Rand DD 110s for initial breakdown, followed by a Dynapac 522 and Dynapac 422 for final compaction and smoothness.

"We used a material transfer vehicle when placing the three-inch shoulder mix, but on the mainline paving work we relied on an aggressive rolling pattern to achieve density specs before the mix cooled down." Adair says. "We were required to conduct four core samples for every 750 tons of HMA placed and pull a sample mix off the truck every 750 tons. The state pulled its own QA sample every 750 tons as well.

"The job produced minimal disincentives and we were able to achieve the improved smoothness criteria the contract specified," Adair adds. "All in all, we were very happy with the final results."