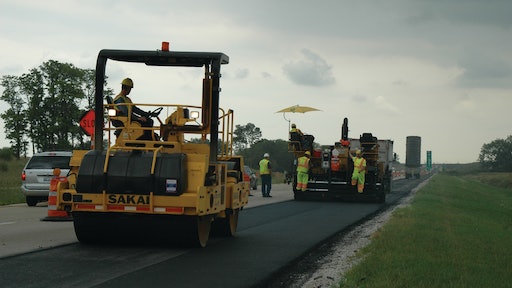 Consisting of 2,047 lane miles connecting four interstates and serving 12 counties, the Illinois Tollway serves Northern Illinois. Operating under user fees, 1.4 million vehicles use the Tollway daily essentially funding all projects through user payments. Emphasizing a focus on recycling and reducing materials, warm mix asphalt (WMA) has been chosen as the specified material for all major Tollway construction projects where asphalt is required.

Several years of research were completed prior to the Tollway announcing warm mix as the new standard specification for all high-volume construction projects. "We spent four years researching warm mix asphalt before deciding that it should be specified in current projects," says Steve Gillen, materials manager for the Tollway. "We had to prove to ourselves that we had enough evidence warm mix would not cause construction problems or reduce the life of our pavements."

A variety of situations were included for the testing of warm mix leading to successful results. "We started completing research in 2008 through several universities," says Paul Kovacs, chief engineer with the Tollway. "There were several test bed projects used in 2010. They were isolated patches of asphalt a few hundred feet long used for research projects with the University of Illinois. We've had great results on everything to make the decision to specify warm mix. After the research and tests we felt confident that warm mix produces the same quality material as hot mix."

The Tollway's decision to specify warm mix in all major construction projects was made providing several benefits. "It's helping prove we incorporate green technologies in our construction," Kovacs says. "It further demonstrates our commitment to sustainability and minimizing the impact of our work on the environment."

With a great focus on reducing asphalt plant emissions and recycling materials, warm mix offers an opportunity to employ a material with a lower environmental impact. "Most of our recent work did a great job by recycling material to use as the base for new pavements," Kovacs says. "Warm mix asphalt further allows for an increase in use of reclaimed asphalt pavement because of reduced oxidation of the asphalt binder during production. There also isn't as much of an odor with WMA as there is with hot mix asphalt."

In addition it offers cost benefits to all parties involved in the projects. "Many contractors were pushing for the specification of warm mix due to oil prices," Gillen says. "Producing large quantities of warm mix will save a few dollars at the plant."

Another benefit to specifying warm mix in all Tollway projects is the opportunity to work longer in the season—a much desired opportunity in the Midwest. "Warm mix allows crews to complete work later in the season," Kovacs says. "In an area where weather and cold temperatures limit road work, it is helpful to have a new technique that gives us greater flexibility in getting our work done."

Additional benefits include the ability to open lanes sooner, minimize rutting issues and improve density during compaction. With all of these new opportunities, the Tollway is still able to produce a quality final product.

While warm mix continues to gain momentum in Illinois, Curran Contracting has completed several jobs using warm mix starting with its first project in 2008 and two projects in 2010. So far, Curran Contracting has continued business as usual with the required specification of WMA on Tollway projects. "We haven't encountered any challenges so far with warm mix," says John Lavallee, quality control manager at Curran Contracting. "We are using a chemical product for our warm mix, and plant modifications were minimal."

Curran Contracting bid and was awarded two Tollway projects for warm mix on  I-88 on the Ronald Reagan Memorial Tollway , with a split at Annie Glidden Road located in DeKalb, IL. The two projects were bid separately, a day apart, with one project stretching 15 miles west while the other project stretched 23 miles east. Work began in April and will be completed in November, with a substantial completion date in October, when the majority of the work must be completed.

Curran Contracting used material from its DeKalb plant that was a Gencor 500-tph plant with four silos, three reclaimed asphalt pavement cold feed bins and six aggregate cold feed bins. Roughly 350,000 tons of WMA was produced for the two Tollway projects with 130,000 tons used on the west project and 220,000 tons used on the east project. Warm mix was used on the mainline and all of the shoulders. "The roadway was in fair condition, and it was patched every fall," Curran says. "The shoulders were in much worse shape. We were doing more repair work on the shoulder than on the main line."

During production, Curran Contracting was able to get close to 260 production temps and monitored the mix going into the silo without any clumping and few coating issues. There was also great success on the jobsite with densities staying where they had been running and a temperature drop of 10 degrees from plant to paver. Curran Contracting saw an average temp between 240-260 degrees before the initial paving.

As for the project, crews completed a mill and fill laying down a final surface of SMA.  Crews paved 2.5 miles per night and 2 miles per day, when the plant was available and the schedule allowed. If crews were able to complete both day and night work they could pave 4 to 5 miles in 24 hours.

A 19 mm bottom lift and a 9.5 mm top lift were laid on the shoulders using a WMA N50 binder and WMA N70 surface with a PG 58-28 asphalt cement. Key pieces of equipment used included Caterpillar paver a Roadtec MTV, two Sakai 3-wheel rollers behind the paver, and one double-drum Hypac finishing roller.

With every project, contractors are faced with challenges and finding a way to overcome them. For the Tollway project, Curran Contracting's biggest challenge was the change in staging. "The original plan was to put the traffic on the outside shoulder after it was paved to allow for two lanes of traffic," Curran says. "When the traffic was first placed on the shoulder we had many immediate failures due to the deteriorated condition of the existing concrete shoulders under the newly place hot mix asphalt."

As a result, Curran Contracting had to work with the Tollway to create a new staging plan. "We proposed reducing traffic to one lane for short durations to allow for mainline paving," Curran says. "We had to coordinate our milling and paving plan to allow traffic to be opened to one lane Monday through Thursday and two lanes during the day Friday through Sunday night."

Another challenge Curran Contracting faced was coordinating the work between days and nights to allow the DeKalb plant to produce mix for other projects and private customers.

Due to the high-traffic location of the project, Curran Contracting was also required to use alternative transportation for crews to the site. Painted in Curran yellow, crews were transported to and from the site in a school bus. "Since the job was 37 miles long and the Tollway does not allow personal vehicles to be parked in its ROW we had to have an efficient and safe method to get our people to the job," Curran says. "We would load all of the crew members at a location off of the Tollway and transport them to the job site. The only vehicles on the jobsite were the bus and other vehicles necessary to complete the job. The hazard and distraction of 10 or so vehicles parked on the side of the roadway were eliminated."

Hawbaker Warming Up to Warm Mix