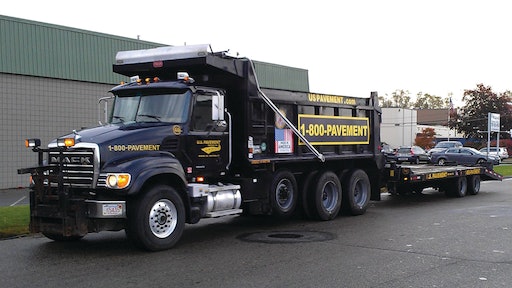 U.S. Pavement Services’ next step is to broaden the Buy American effort to include the 1-800-PAVEMENT members and to develop some type of buy-American certification that contractors can qualify for and then promote to their customers.

Marketing your business doesn’t always have to be related to benefits and price discounts. As U.S. Pavement Services, Woburn, MA, learned last year, marketing can be just as successful when it paints a bigger picture -- especially a red, white and blue picture.

Musto says he got the idea after watching an ABC News segment that reported on a house being built in Bozeman, MT, using only American-made materials. The builder, who had an economics background, determined that if every U.S. builder could increase its purchase of American-made materials by as little as 5% that would translate into 220,000 new jobs in the United States.

“That really hit home with me,” Musto says. “We are coming out of a recession and the economy is struggling. We’re losing ground to other countries, manufacturing is the lowest it’s been in I don’t know how many years. Everyone is talking about ‘we’re going to cut taxes’ or ‘raise taxes’ but I think it’s all about jobs because if we can create more jobs you have more people working to pay more taxes and that will go a long way to helping our country.”

So the contractor took a look at everything purchased in 2011 and did the research to find out where it was all made. Musto says raw materials were not taken into consideration, the determining factor being where a material is produced or equipment is manufactured. (Canadian products are allowed because, Musto says, Canada is a fair and equal trading partner with the United States.)

“It took us two full months of research but we did it,” he says. “As we did purchase orders we asked if what we were buying was American made and if it wasn’t could they find an American-made alternative for us. If they couldn’t then we made a switch on our own.”

He says that in some cases the products switched to were slightly more expensive but he says the increased cost made little difference (much as the Bozeman builder who said the use of all American-made product added at most 1% to the cost of the house). Musto says an American-made car tire was the most expensive item they switched to.

“There are definitely alternatives out there that aren’t much different in price, and the quality is the same or better,” he says. “We pretty much found that everything is competitive except for that tire which we bought anyway – now we just hope it lasts longer to justify the price difference. But cost wasn’t really a concern. We mainly just decided to make a commitment to do it.”

He says they were able to find replacements for almost everything they use in the office and in the field with two exceptions: paper shredders and forklifts. “So we couldn’t change those but everything else we buy and use is now made in America.”

Musto, who is also president of 1-800-PAVEMENT vanity phone numbers, says that while the impetus for the Buy American effort was patriotic, he soon realized there could be marketing benefits as well and he quickly moved to take advantage of them.

“We did look at it a little as a marketing plan because companies in this country want to do business with American products,” Musto says. “Personally I would definitely prefer to buy American products than non-American products and many others feel the same way. Many contractors we talk with about this completely love the idea.”

He says that the company’s trucks, website, and promotional materials now feature the same Buy American logo featured on the ABC News program, and he says the effort has definitely had an impact on the business.

“I can’t tell you that we got X number of jobs out of this but we do think we really got more business out of it. We do mention it to our customers and every one of them has said it’s a great idea,” he says.

He says that short of everyone buying only American-made goods, Musto says he’d like to at least increase people’s awareness of where the things they buy are made.

“One of the problems in our economy is that we don’t even look at what we are buying, at where it’s made. My wife and I went to buy a bedroom set and I really didn’t even think about it until we pulled into the parking lot. But we decided we weren’t going to buy one that was not made in America. We found a set we liked but it was made in China. We found another set and it was also made in China. Long story short we didn’t buy a bedroom set that day and we still haven’t because we can’t find one made in America that we like.

“Frankly I think our whole pavement maintenance industry should buy 100% American or as close as they can because as an industry we can really make a big difference,” he says. “I just think it’s the right thing to do – and many of my customers think so too. But the main thing is to get other people to just think about it, to make them realize there are other options.”