At Stewart International, the Sky’s the Limit

After a major airfield rehabilitation and terminal expansion through 2015, the sky will be the limit for Stewart International Airport north of New York City and the airfield contractor doing the work 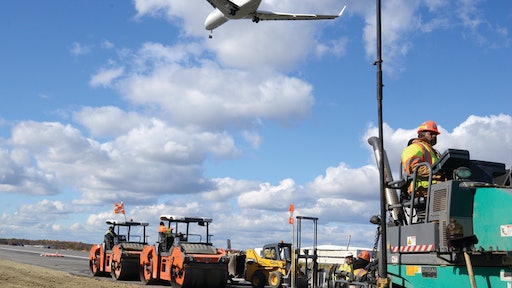 Intercounty Paving Associates will have placed more than 250,000 tons of asphalt by the end of the year at Stewart International Airport.

All systems were “go” in 2013 for Tutor Perini Corporation/Intercounty Paving Associates LLC, a joint venture, as it took on the first phase of the $143.5 million renewal of the airfield at Stewart International Airport at Newburgh, NY. Stewart International Airport is located near Newburgh and New Windsor, NY., at the intersection of the New York State Thruway (I-87) and I-84, and lies about 60 miles north of New York City.

Intercounty is responsible for all aspects of the milling, paving and recycled concrete aggregate (RCA) on the reconstruction of the east end of Runway 9/27 at its Intersection with Runway 16/34.

This significant runway rehabilitation project began in mid-2013 and will last through May 2015, and the rehabilitation will include both runways and several of the taxiways. It’s all part of a 10-year, $500 million capital improvement plan by the owner, the Port Authority of New York & New Jersey, to expand the airport, including the major terminal enlargement.

Main runway 9/27 is 11,817 feet long, and crosswind runway 16/34 is 6,004 feet long. Both are 150 feet wide with 35-foot-wide shoulders on each side. In 2011 over 30,000 aircraft operations were logged, and in September 2013 its removed location and long runways made it the preferred airport for international flights bringing world leaders to New York City for the 68th United Nations General Assembly.

In 2013 Intercounty milled one inch off the existing runway surface, and replaced that with varying depths of polymer-modified hot mix asphalt to even out the undulating surface. The mix is an FAA spec, the majority of which is 3/8-in. stone with some half-inch, and 5 percent liquid asphalt. The same aggregate mix will be placed on the shoulders, but with a warm mix asphalt design incorporating Evotherm warm mix modifier.

The mix is being produced by Jointa Lime, which has a portable plant just off site. "All the mix is FAA approved P401," says Rob Bach, field and applications engineer-asphalt innovations for MeadWestvaco, which produces Evotherm warm mix additives. "Some areas of the runway have 15-in. repairs and fills. According to the contract, anything -6" from top of grade can utilize PG64-22 with Evotherm. Anything above that to top of grade will utilize PG76-22."

Egerter with Intercounty adds, “One area is going up 30 in., while other areas only go up 3 in. Everything is being leveled up to -3 in., and then a 3-in. top course will be placed. The pavements will exhibit a 1.5 percent pitch from centerline, and shoulder pitch up to 3 percent.”

Cold mills were used to remove runway surfaces, but due to in-place utilities, dozer and excavators were used to remove asphalt and dirt from the shoulders. For the shoulders, reclaimed asphalt pavement (RAP) millings from the runways were placed as a 6-in. subbase, which was topped by 4-in. of macadam plant mix, ¾-in. stone with PG 64-22 oil. It was topped by 3 in. of the warm mix asphalt.

The polymer-modifier main line lifts were stiff, and hard to place, Egerter says. “We used a Vögele Super 2100-2 with high density compaction at the screed, so the rollers didn’t have to work as hard,” he says. “We placed the pavement at 25-ft. widths, so were able to work in three pulls on either side of the centerline.

The screed is heavy enough to perform across the 25 ft. width. We’ve used other pavers at that width and have had a hard time keeping consistent grade control that wide.”

Out of the paver, Intercounty was getting 86 to 88 percent compaction with its Vögele TP2 screed, and then three Hamm rollers were going to work, an HD+ 140 HF doing breakdown, the HD+ 120 HF as an intermediate, and an HD+ 140 VO doing finish work. Target compaction spec is 98 percent or better on the mat, and 96 on the joint.

All were new in 2013, and were acquired from Wirtgen America distributor Edward Ehrbar Inc., Yonkers, NY. “We demo’ed the rollers before this job so we had a good feeling going into the project,” Egerter says. “And we purchased the Super 2100-2 for this job because we either had to use one paver 25 ft. wide, or two pavers in echelon centered 12.5 ft.”

A new tracked, 10-ft Vögele Vision 5200-2 paver with VF 600 front-mounted extending screed also is being used on this project. While the Super 2100-2 is engineered as a high-performance, international-scale paver, typically used in very heavy (thick) and wide lifts and passes, the Vision series was designed exclusively for North American use.

One of Intercounty Paving’s new Wirtgen W 250i cold mills has done the bulk of the milling, but at one point five Wirtgen W 250 mills were working for 17 hours straight.

Intercounty recently converted its entire inventory of 10 cold mills to an all-Wirtgen fleet. Of the mills, two are standard W 250s, and eight are the new Tier 4-interim-compliant W 250i. Of them, four are half-lane, and six are full-lane machines.

“The first two W 250s, which came earlier, are Tier 3 technology,” says distributor Ehrbar’s Patrick Ahearn. “For the subsequent order of eight mills, to completely change out the fleet, Intercounty wanted to go all-Tier 4-interim, so the rest of the mills are W 250i.”

The milling machines used to fine-tune paved profiles. Slow but steady movement with a high drum speed is the key.

“The pattern is achieved by an 18-mm drum run at high-speed, which is 2100 rpms,” Lizza says. “It’s a slow process, but the benefit is a smooth pattern. It’s not exactly the fine-texture pattern, but it’s a much smoother process with an 18-mm drum than you normally would have.”

A Kleemann Mobirex MR 110 ZS mobile jaw crasher? was also on-site processing demolition concrete resulting from the runway expansion. Because the expansion encroached on grassy areas, and the state permit required any such losses to be replaced, those lost areas were “mitigated” by removal of aging, unused concrete aprons and conversion of that space to grassland.

“They took existing concrete infield areas and converted them to grass,” Egerter says. “We also will have to use recycled concrete aggregate in the new taxiways and runway pavements, not millings. So we crushed and stockpiled it.” In addition, millings from the project are being reused as runway shoulder base.

One paver instead of two

The complete turnover of Intercounty Paving’s cold mill fleet to an all-Wirtgen fleet was the result of two years of communications between distributor Ehrbar and Intercounty, capped by a visit to Wirtgen Group manufacturing plants.

An epiphany on the part of Lizza during the Wirtgen Group tour led to the purchase of the Super 2100-2 and Vision pavers. Even as the group toured the plants, Intercounty already had bid the Stewart project. “We really had not been thinking about pavers on the trip," he explains. "But while we sat in the area where finished equipment is loaded out, I saw a 40-ft. solid screed sitting there. I realized a 25-ft. screed would be a great thing to have for the Stewart project, as we could pave the runway in six pulls with a single machine, rather than two pavers and two crews. When we got back we reviewed our calculations and set up a demo at JFK where we ran a Super 2100-2 all day; we acquired a Super 2100-2 soon after.”

Lizza says using a single 2100 could cut quality control costs as well. “It allows us to eliminate half the longitudinal joints on the job, and half the testing at the same time,” he says. “It was a good idea from the point of quality control, as well as man hours. While the paver cost more than other pavers, the size of this job – 260,000 tons through next year – makes it feasible.”

Compaction at the screed also helps Intercounty cut roller costs. “On this job we would have used four rollers, and we wanted to cut to two,” Lizza says. “For our own quality control we stayed at three. But we still are realizing savings there.”

Now, with its tested equipment fleet, Intercounty Paving is well positioned to tackle future projects in the Empire State and elsewhere in the Northeast.

“We look at our use of this new equipment here as training for projects to come,” Lizza says. “We are looking to stay with this kind of work, and these tools and equipment will help us perfect our operations and keep us at the forefront of contractors in this industry.”