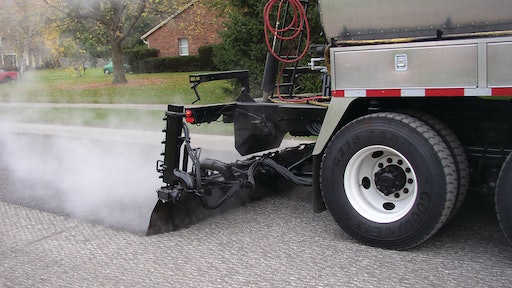 Application of tack coat to an existing pavement surface is so simple and inexpensive that its real importance is often overlooked. Normally considered an incidental expense tack-coat material cost is often not paid for directly but rather included in the cost of other contract items. But proper application of tack coat is critical to performance of a hot mix asphalt (HMA) pavement structure.

When is a Tack Coat Needed?

A tack coat is normally applied to an existing pavement surface before a new layer of HMA is placed. This is done whether the existing surface is an old asphalt concrete layer or a portland cement concrete (PCC) pavement. In some cases, a tack coat is applied to a new HMA pavement layer before the next layer is placed--such as between a HMA surface course constructed on a HMA leveling course.

The proper amount of residual tack coat material on the existing pavement surface normally does not cover the entire surface. In the vast majority of paving situations, the tack coat is distributed over only 90 to 95 percent of the existing surface. This means that 5 to 10 percent of the existing surface is still visible once the tack coat has been applied. Too little tack coat might result in a significant reduction in the strength and durability of the pavement structure. Too much tack coat, however, can easily create a slip plane between the layers and cause the upper pavement layer to slide on the lower layer.

It has often been found, when cores are cut shortly after HMA pavement layers are constructed, that bond between the pavement layers has not occurred. Many variables affect the rate of bond development: climatic factors, the amount of traffic, the thickness of the layers, and the degree of density obtained in the HMA mixture. In some cases, the bond between the new asphalt layer and the old, existing pavement might occur within a few days or weeks. In other cases, however, it could be many weeks or even months before the bond is developed between two layers.

Cores cut from a new overlay, then, might not be immediately bonded to the old pavement surface. It has been found that the bond will develop with time, traffic and warm weather. The bond will still eventually develop even though only 90 to 95 percent of the existing pavement surface is covered with the tack coat material.

There is no doubt that the application of the tack coat material aids the bond development between the pavement layers and thus the transfer of the traffic loads throughout the thickness of the pavement structure. The tack coat also greatly reduces the amount of sliding or slippage failures that may occur between the existing pavement surface and the new HMA pavement layer. Thus, the proper application of the tack coat is very important in the long term durability of the asphalt concrete pavement.

The most common type of asphalt material currently in use for tack coat applications is an asphalt emulsion. A number of different grades of emulsion are used including both rapid set and slow set type materials. For the rapid set emulsions, usually an RS-1, RS-1h, CRS-1 or a CRS-1h material is specified. For the slow set emulsions the most common grades are SS-1, SS-1h, CSS-1 and CSS-1h.  For some high-traffic roadway paving projects, the asphalt emulsion may be polymer modified.

Detailed information on the properties and characteristics of the various grades of asphalt emulsion can be found in the American Society for Testing and Materials (ASTM) Specification D 997 for emulsified asphalt and D 2397 for cationic emulsified asphalt. Research has shown that the use of a hard base asphalt binder in the emulsion (use of SS-1h in lieu of SS-1) sometimes results in an increase in bond strength and a reduction in the occurrence of sliding failures.

How much Tack Coat Do You Need?

The primary factor to be considered is the type and condition of the existing pavement surface. If that surface is relatively new, clean, and smooth, a minimum amount of tack coat is normally needed. This is due to the fact that little tack material will be absorbed into the existing surface and minimal amount of tack material will be needed to offset the dust on the surface. For a clean, tight surface the residual amount of tack coat required will generally be in the range of 0.02 to 0.03 gallons per square yard (gal./sq. yd.).

In the case where the original pavement surface, either HMA or PCC has been milled, the tack coat application rate should be increased to compensate for the dust from the milling operation and the increase in the surface area and surface texture of the milled surface. Even though the milled surface has been cleaned by brooming or flushing with high pressure water, some dust, dirt, and debris might remain in the bottom of the milling grooves. For this type of construction operation, the residual amount of tack coat material should be in the range of 0.05 to 0.07 gal./sq. yd. Some individuals believe that a tack coat does not need to be applied to a milled pavement since the rough, milled surface texture will prevent the new pavement layers from sliding.  It is strongly suggested, however, that a tack coat be applied to the milled surface to help achieve a bond between the new and the old pavement layers.

Finally, if the pavement layer being resurfaced is portland cement concrete, it might be necessary to slightly increase (rougher surface) or decrease (smoother surface) the residual tack coat amount depending on the texture of the PCC surface. A relatively smooth surface texture will require less tack coat and a relatively rough surface texture will require more tack coat. The residual amount of tack coat required will generally be in the range of 0.04 to 0.06 gal./sq. yd.

A secondary consideration is the type of terrain where the pavement is located. If the grade is relatively flat, the residual tack coat application rates given above are typically adequate. However, if the roadway being paved is located in a hilly or mountainous area, it might be prudent to reduce the amount of tack coat. Lowering the residual tack coat rate by 0.01 gal./sq. yd. or keeping the residual application rate at the lower side of the suggested range would be recommended. It is very important to note that excessive tack coat on the pavement surface in mountainous terrain might cause problems with slippage of the haul trucks and the paver in the tack coat when moving up or down hill and slippage of the completed pavement course at the interface between the layers. The reduction in the rate of the residual tack coat application due to the above construction considerations in hilly terrain is offset, however, by possible reduced performance of the pavement layers due to the high shear stresses caused by traffic moving uphill or downhill.

James A. Scherocman, P.E., is a consulting engineer who, in addition to being a regular presenter at educational conferences such as National Pavement Expo, can often be found arbitrating project conflicts between contractors and public agencies. He can be reached at 11205 Brookbridge Drive, Cincinnati, Ohio 45249 or at jim@scherocman.com.

How to Apply Tack Coat