Threats to Pavement Quality… and A Solution 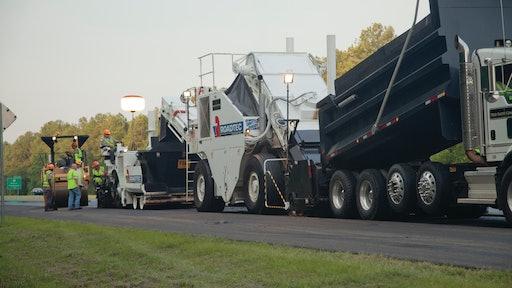 The big challenge asphalt contractors face today is how to improve the quality performance of asphalt paving through production, laydown and preservation.

The expectations for ride quality and durability are greater. Contractors are realizing that yesterday’s asphalt paving practices are not good enough today. There are higher expectations and more stringent regulations for achieving a smooth, durable road, runway or parking lot.

Hot mix asphalt (HMA) temperature differentials occur when cooler HMA is placed during the job. This cooler material is usually caused by transporting the material to the paver with the outside and top of the load cooling faster than the inside.  On large mat jobs, the cooler areas will compact at a slower rate and reach cessation temperature more quickly than the surrounding mat. What can result are issues with inadequate compaction in these isolated areas, which then can cause decreased strength, reduced fatigue life, accelerated aging/decreased durability, rutting, raveling, and moisture damage. Generally, temperature differentials greater than about 25°F will cause compaction problems.

"Segregation is a lack of homogeneity in the hot mix asphalt constituents of the in-place mat of such a magnitude that there is a reasonable expectation of accelerated pavement distress(es)."

They point out that “constituents” refers to asphalt binder, aggregates, and air voids. In essence, segregation negatively affects the HMA performance and pavement life. The chief problems are: reduced fatigue life, rutting, raveling, and moisture damage.

Smoothness is the ultimate goal of the paving contractor. The finished paved mat smoothness is what contractors are evaluated on and how success is measured. Smoothness matters. The contractor can win bonuses or be fined based on the finished surface’s smoothness measure on the International Roughness Index (IRI).

Minimizing the need for paving starts and stops is a major objective in planning for smoothness. Halting the paving operation can disrupt the uniformity of the pavement’s surface and compromise the smoothness of the mat. The main reason for unplanned stops in paving operations is when material is not available when needed.

Fortunately, asphalt-paving contractors today have access to better tools for ensuring quality results and control throughout the paving project.  One such tool is the material transfer vehicle (MTV).

MTVs are used to assist the paver in accepting a regular supply of HMA. Most pavers can receive HMA directly from end-dump or live-bottom trucks, however in most situations it can be better to use an MTV. Paving machines using bottom dump trucks and windrows require a windrow elevator MTV, while other MTVs are used to provide additional surge volume, which is beneficial because it allows the paver to operate continuously without stopping, minimizes truck waiting time at the paving site and may minimize aggregate segregation and temperature differentials.

Typically windrow elevators are positioned directly in front of pavers. They are designed to pick up the HMA windrow and transfer it to the paver hopper, with the goal of virtually continuous paving and increased production. When using windrows and windrow elevators, the windrow laydown rate must match the paver laydown rate. If the amount of material in the windrow is too little or too much, the paver may become overloaded or may run dry and have to stop. It’s these stops that result in pavement deficiencies.

Surge volume / remixing MTVs are often used in tandem with a paver hopper insert that increases the capacity of the paver hopper. The insert is removable and sometimes contains remixing apparatus (such as a pugmill) near the bottom.

One MTV manufacturer, Roadtec, which lays claim to inventing the concept of material transfer vehicles in 1989, offers its patented uniform remixing auger. The anti-segregation auger employs three different pitches that get progressively bigger towards the center of the MTV. This triple-pitch flighting allows for additional material to enter the auger area each time the pitch is increased resulting in thorough remixing.

Additionally, the Roadtec MTV-1000 Material Transfer Vehicle offers another patented innovation, an offset gravity transfer which is designed to provide reblending of asphalt materials just before they are delivered to the paver, which is engineered to eliminate truck-end segregation and allow for continuous in-line paving. The Roadtec MTVs also have optional windrow attachments that can pick up material from the windrow and deliver it to the paver properly mixed and at the right temperature through its process.

Back in the 1980s, Roadtec engineers had been inspired by pavement failure studies that had been conducted and which showed the significant causes were material segregation. The company’s R&D staff looked at HMA at job sites with infrared camera and saw dramatic temperature differential in the mix, even when haul distances were short. The research showed that non-uniform compaction, raveling, and stripping could be directly traced back to the temperature differential. There are two Technical Papers researched and written by Roadtec technical staff titled “Segregation: Causes and Cures” and “Temperature Segregation / Temperature Differential Damage. The documents can be found as free downloads on the Roadtec website.

The original concept of the MTV still holds today, as it did 25 years ago: a machine to “shuttle” HMA between the haul truck and the paver in order to provide an uninterrupted supply to keep the paver productive. The ability to have nonstop paving can reduce problems of temperature differentials and aggregate segregation, thus leading to a much smoother, more durable finished paved surface.

The emergence of both the windrow elevator MTV and the surge volume / remixing MTV are clearly benefiting paving contractors as they pursue smooth, durable paved surfaces that meet the stringent quality standards that they face today.