When it comes to HMA, effective compaction is key 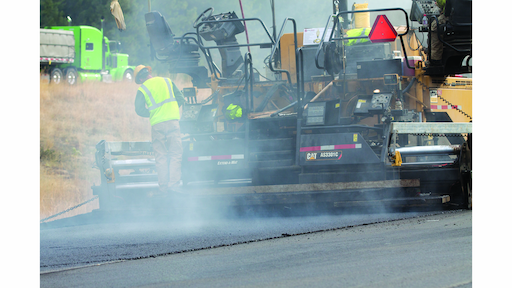 Cooler weather is on its way. Successful contractors know how to make sure their operations are successful when that cold weather arrives — and how to ensure quality continues.

In the context of this article, quality refers to the degree of compaction achieved. It’s generally recognized that effective compaction is the single most critical variable in placing a quality asphalt pavement that will perform well for many years.

Field experience confirms that paving can be done under adverse weather conditions. However, the key to success is recognizing that paving practices that are successful in the warm summer months will not produce the same quality results in October through April.

HMA is composed of aggregate (rock and sand) and asphalt cement (binder). Asphalt cement is the glue that holds together the rocks that make up hot mix asphalt.

Viscosity is a property that is unique to each grade and source of asphalt cement.

For all paving applications, it’s critical that the asphalt cement be above a minimum temperature at which it will flow sufficiently for compaction to be obtained. Maintaining mix temperature from the plant to the rollers is especially challenging in cold weather.

As long as the asphalt cement can flow, the compactive effort of the rollers can force the mix into a compacted, stable configuration with good aggregate interlock. When asphalt cement becomes more viscous (“thicker”) as the temperature of the mix drops, it behaves more glue-like and the aggregate in the hot mix cannot be manipulated into a dense configuration by the force of the rollers.

Thus mix temperature, as it relates to ability of the mix to “flow” into a compacted configuration under the weight of the rollers, is the single most critical factor to achieving sufficient compaction.

The time available for compaction (TAC) defines the total amount of time that rollers operators have to compact the mix before it loses too much heat and becomes too stiff to compact. The following list summarizes the primary factors influencing the rate of heat loss in HMA.

Thicker lifts hold temperature much longer than thinner lifts. The heat retained in asphalt lifts is not a linear relationship, but rather an exponential one. For example, a 75 mm (3-inch) lift will retain heat for approximately four times as long as a 40 mm (1.5-inch) lift of the same mix placed under the same conditions.

Base temperature also plays a significant role in how much time is available for compaction. This is especially true for thin lifts in cool weather. Heat transfer generally occurs more quickly through more dense media. For example, a glass of water will freeze much more quickly by placing it in contact with ice in a bucket than by setting it on the middle shelf of a freezer and forcing cold air around it.

Since the base material on which the asphalt is being placed is essentially an infinite mass when compared to the thin lift of HMA on top, the base will absorb large quantities of heat very quickly.

Laws of heat transfer tell us that when two surfaces of different temperatures are in contact, the resulting system will tend toward reaching a state of thermal equilibrium at which both materials in contact eventually reach the same temperature.

This phenomenon is observed when hot asphalt is placed on a cold base. The heat, or thermal energy stored in the HMA, quickly transfers to the cold base as the system tends toward thermal equilibrium.

The ambient air temperature has a relatively minor influence on the cooling rate of HMA. However, if the ambient air temperature is combined with wind, a condition of both conductive and convective heat transfer occurs. Heat is now being lost to the base through conduction and to the air through convection. The greater the wind speed, the more quickly it will remove heat from the HMA.

Finally, solar-radiant flux refers to the effect of the sun on HMA temperatures. This effect is minor in most circumstances.

Solar-radiant flux refers to the net heat loss from the pavement that is the difference between the heat absorbed by the pavement from the sun’s rays and the heat that radiates off the mat into the air. Simply stated, this means that sunshine will help reduce the rate of cooling of the placed HMA.

When placing hot-mix asphalt (HMA), ensure that the mix temperature is a minimum of 290 degrees F at the mid-depth of the mat behind the screed when the compaction process begins.

The ideal mix temperature will vary depending on the binder type used in the mix, lift thickness and the time available for compaction under given ambient conditions. Many charts and computer software tools are available for free distribution to provide good estimates of the rate of HMA cooling.

It’s almost impossible to achieve maximum compaction if breakdown rolling is not started before the mix cools to 280 degrees F behind the screed.

Understanding that compaction is directly related to the mix temperature, it’s necessary to maintain a high mix temperature during production, transportation and placement of the hot-mix asphalt.

The main thing to remember in cold weather paving is that the Time Available for Compaction (TAC) is dramatically reduced. In planning for your project, consider all the factors that will contribute to cooling of the mix.

There are several questions that can be asked and several variables to consider in order to be successful in cold weather paving. Know that mix temperature is critical to achieving compaction. Know that you will have less time to compact the mix in cold weather, as the mix will cool more quickly. Understand the factors that affect the cooling rate of the mix. Decide what variables you are willing and able to control, such as type of equipment used and requested mix delivery temperature.

Take time to develop and review a cold weather-paving plan with your crew and enjoy the success that comes with working as a team and taking pride in your work.

Equipment questions to keep in mind

When it comes to cold weather paving, consider the equipment that you have available. Here are some questions you might ask as you plan your work:

Is It Too Cold to Pave?

Winter Paving? Why Not?