Geogrids have aided in retrofits by facilitating a reduced thickness of the sub-base; serving as an abridgement; enabling a shorter time of construction, as well as a cost reduction 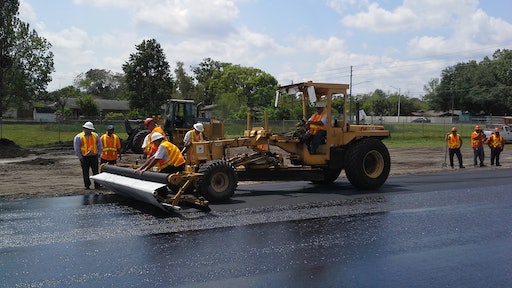 When unfavorable soil conditions are encountered under the pavement structure, improvement measures taken includes over excavation and layer thickness enhancement by either increasing it with aggregates or having a reduced thickness with geogrids reinforcement to stiffen the sub-base. Having a composite asphaltic sandwich layer with glass grids enable more efficient means by which to transfer load onto underlying layers.

The use of geogrids when handling many scenarios of failures occurred within our infrastructure has aided in our retrofits by facilitating a reduced thickness of the sub-base; serving as an abridgement; enabling a shorter time of construction, as well as cost reduction. In addition, the use of glass grids to strengthen the asphaltic layer has also been successful. Here are some examples of failures and solutions with the use of geogrids and glass grids.

Following two days of heavy rainfall, a typical crack resembling “tearing” was evident along a 100-ft section of the of Kelly Park Road pavement.

Cracking and tearing of pavement

These cracks do not manifest a differential settlement of the underlying soil and there was no perched water table to suggest a seepage slope. The pavement crack was postulated to be resulting from a north-ward pull of the underlying fill along a plan of weakness created by improper “joining” of the new fill on the original road embankment, which was widened by filling against the pre-widened slopes. Infiltrated rainfall increased the weight of the soil which initiated the movements of this weak interface. An after failure inspection found that there was no box-cut procedure performance to tie wedge fill to the former roadway slope, hence the ensuing movement of the filled slope and resulting pavement tearing situation. The affected pavement and portion of the soil cement base was milled and reconstructed with two layers of geogrid, limerocks base and layers of asphalt.

Kelly Park Road – geogrid to base.

South Lake Pleasant Road which traversed across a natural wetland manifested signs of significant settlement distress. A geotechnical evaluation revealed that the settlement observed was due to the compression of thick deposits of buried organic soils which underlie the roadway embankment. Such thick deposits of organic materials (over 100 ft. thick) occur naturally within the channel of wetland sloughs.

This roadway distress was aggravated by the decline of the water table to low levels arising from a record cumulative rainfall deficit in 2007. When the water table levels decline, the effective stress of the soil increases as there is a reduction in buoyancy support, which increases the load on the buried layers of muck and peat which caused compressing with resulting settlement at the surface. Based on the severity of this distress, the remediate plan included road base replacement, geogrid, and a pavetrac layer of asphalt. Four (4”) inches of asphalt and base was milled, then a 1” thick leveling course was reconstructed with a layer of geogrid to facilitate settlement bridging and load transfer, and 3”of asphalt overlay was constructed in two lifts to address this failure issues.

A bank failure resulting from rotational failures on a segment of a major canal bank occurred during a backfilling restoration. The failed slope segment of the canal bank was excavated to determine the failure plane and reconstructed with geogrids reinforcement in a series of stair step cut into the undisturbed soil to mitigate the failure.

In a highly residential and commercial neighborhood, a segment of Lake Underhill Roadway continued to show severe areas of pavement failures. The root cause of the pavement distress was found to be a deficient base and subgrade material which had lost its inherent strength over time due to disintegration as well as high traffic volume, which resulted in the design capacity of this roadway being compromised. The implemented solution involved removal of the existing pavements to the subgrade and full depth pavement reconstruction at selected locations of the road down to 25”. However, because of roadway traffic delay issues, the unsuitable soils were removed below the subgrade and backfilled with sand and geogrid reinforcement for stabilization. The asphalt was reinforced with glass grid reinforcement, sandwiched between two- inch thick layers of super pave asphalt 12.5” thereby enabling a composite asphaltic layer:

Lake Underhill geogrid to base installation

As described above, some of the roadway failures have been extensive enough to seek experts’ service from design analysis to construction. However, in many low capacity roadways asphaltic layer distress has been retrofitted with base repairs and the use of geo-grid to strength the sub-base. With respect to the asphaltic pavement layer, glass-grid has been used to reinforce the pavement structure thereby forming a composite asphaltic pavement surface. Recently, because our in-house crew performed many low capacity roadway repairs on asphaltic layer due to the small extent surface failure, as well as low traffic movement, a specialized machine was purchased to aid in the placement of the glass grid on the asphaltic surface prior to resurfacing. Challenges such as the correct type of tack to hold down the glass-grid as well as minimizing the spreading of tack from the asphalt delivery truck movement presented very immediate issues as in the case of the Bates Road, as shown below.

Bates Road provided staff with very valuable experience on the glass grid placement with the subject machine. Tack density for the geogrids, as well as proper bonding knowledge and techniques learned in the use of these geotextile to strengthen the roadway base and asphaltic surface, has been a benefit to the in-house staff.

These situations are only a few examples where geogrids and glass grids enables a stiffer subgrade layer and asphaltic layer thereby with a reduced thickness, while addressing the many retrofits from settlement and potential instability facilitating a more efficient load transfer to the subgrade, and a stronger roadway.

There has never been a better time to recruit Gen Z and Millennials. Learn how to better attract the up-and-comers with these tips.
August 1, 2020
Latest

There has never been a better time to recruit Gen Z and Millennials. Learn how to better attract the up-and-comers with these tips.
August 1, 2020

Woolpert Construction will expand SR 48 from three lanes to five which will alleviate congestion and promote safety in a growing region of the state.
July 15, 2020

National League of Cities study shows 70% of cities have not received funding through the CARES Act and 24 states have not yet announced plans to distribute Federal Coronavirus Relief Funds to local governments
July 7, 2020
Follow Us