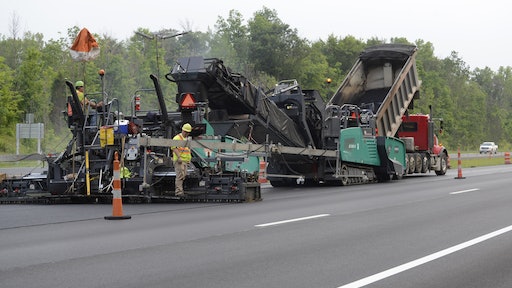 In early summer, Shelly & Sands Inc., Zanesville, OH, completely reconstructed over nine miles of I-71 between Mansfield and Columbus in the central part of Ohio.

In a $54 million project, the Ohio DOT took the opportunity of widening I-71 from two lanes to three to completely rebuild the highway from the base up. This project represents the last stage of “three-laning” the busy interstate from Columbus to Cleveland, and the segment between Columbus and Cincinnati also is being widened to three lanes.

The star of the show on I-71 was Shelly & Sand's new  Vögele MT 3000-2i material transfer vehicle, feeding a Vision 5200-2 paver with VF 600 screed. The compact low-center-of-gravity MTV offers an alternative to the "silo" or shuttle-type MTVs which have been the standard up to now most states and to existing low-profile MTVs.

The MT 3000-2i fed an innovative hopper insert mounted in the hopper of a Vision 5200-2 paver with VF 600 screed, both from Vögele. The VF 600 is a front-mount screed designed for main line paving. The paver operates with the Niveltronic Plus leveling system from Vögele, and Shelly & Sands has settled on that system.

The high-vibe Hamm rollers were critical in meeting state density specs, says Tom Ellis, area manager for Shelly & Sands. “As long as they’re on it, good and hot, we’re getting densities above 94%,” he says. “Behind the intermediate roller we’re in the 93-94 ranges, and with finish we’re above 94. The oscillation in the finish roller allows us to continue to compact even if the mat is at a lower temperature. Oscillation is like a ‘get out of jail free’ card, as it will continue to compact at lower temperatures.”

To begin, 9 inches of aged asphalt was milled by milling subcontractor BOCA Construction Inc., Norwalk, OH, from the existing two-lanes, both north- and southbound, revealing an original concrete pavement. This was rubblized by Shelly & Sands using a towed rotating breaker, and then dug out by excavator. These pieces were crushed by Shelly & Sands using its Kleemann MR 110 Z EVO mobile impact crusher located in the median.

In the meantime, the underlying stone base was removed. A 10-in.-deep cement-treated base was created by the Cleveland area-based subcontractor Cem-Base Inc., using two Wirtgen WR 2500s.

For wide paving like on I-71, the VF 600 screed with bolt-on extensions was used, and that offered advantages to Shelly & Sands. “We made the right choice with that screed,” says Shelly & Sands’ Steve Schlosser, equipment superintendent. “It’s working out well, and the feedback from the group is positive.

“I believe the front-mount VF 600 is more versatile than a rear-mount, because it’s easier to see and manage the material than with a rear-mount,” Schlosser says. “The visibility is better, and on a two-lane highway it’s easier to move the wing in and out. You can go narrow, or you can go wide. We found that for us, the front-mount screed works best.”

In fact, of all of Shelly & Sands’ screeds, only two are rear-mount. The contractor finds that while rear-mount screeds may be ideal for long-pull highway work, they are less manageable in tight urban quarters, and material management issues can develop as the screed is brought in, causing the screed to rise.

“With the front screed, the ability to go in and out is so much easier with the material,” says Scott McLean, vice president/field sales manager of McLean’s Columbus branch. “You don’t have to change the head of the material.”

At the start of the project, the contractor found the VF 600 was easier to set up than virtually any other of its screeds.

“It’s easier to put the extensions on and adjusted properly, so you can pave a good mat,” says Shelly & Sands’ equipment superintendent Steve Schlosser. “It’s less time-consuming to set up. From the first couple of hundred feet, the mat quality was high. The crews really like it. Structurally, it’s heavier than screeds we’ve used in the past, and that’s really good, as lighter weight is one of the downfalls of screeds.”

The VF 600’s versatility shows in its applications. “We could take that paver with front-mount screed up on a high-volume highway and lay two lanes at once,” Schlosser says. “Then the paver could end up on a two-lane highway, and then to an airport where it will be spreading 25 ft. wide.”

The Vision 5200-2 used on this project is one of 23 Vögele pavers owned by Shelly & Sands. The firm also owns 36 Hamm rollers.

“The Wirtgen Group, along with The McLean Company, has proven themselves over time with us,” Schlosser says. “We expect good bonus money because of Jake Christina’s crew, plus the hard work of Chad Evans’ Mar-Zane Plant 12. The combination of our good people, good equipment, dealer and factory support has helped this project.

Some 624,984 sq. yds. of pavement will have been placed by the end of the project in June.

The MT 3000-2i was used only on the surface course, says Shelly & Sands’ quality control manager Ed Morrison. "For paving at night, state spec requires an MTV for any surface work over a continuous mile, but we used one whether paving day or night," he says. "We do it to minimize segregation, and it helps us achieve density and smoother pavement."

That's important as this project carries a $450,000 bonus if all IRI specifications are met. "This MTV is helping us get there," Morrison says. "The main advantages are, No. 1, smoothness, and No. 2, density. Regarding smoothness, we have better truck exchanges because the MTV acts as a buffer. And we keep a consistent head of material in the paver hopper. Consistency is the big thing for smoothness; it takes error out of the equation. And the reduction in segregation helps us maintain density."

Segregation can develop at the plant, at the silos with the way the trucks are loaded, and in the paver, he added. “The plant and drivers need to follow the three-drop system, a drop in the front, one in the back, and one in the middle of the trailer, Morrison says. “And if crews let the paver hopper run too low, it can lead to segregation.”

According to the new National Cooperative Highway Research Program synthesis, NCHRP 477, Methods and Practices on Reduction and Elimination of Asphalt Mix Segregation (2015, Google “NCHRP Synthesis 477”), end-of-truck segregation is one of three types of material segregation that can result in coarse mat finishes.

End-of-truck segregation also is known as truck-to-truck and truckload-to-truckload segregation. “Segregation can be reduced when the end dump haul truck bed is raised before opening the back gate,” according to NCHRP 477. “When the gate is finally opened, the mix is discharged from the truck bed in mass into the paver hopper. This process rapidly fills the paver hopper and prevents the coarser particles from collecting in the paver wings.”

Shelly & Sands follows that best practice. “We like the trucks to come back to the paver or MTV with their beds halfway up, and as soon as they contact the machine, they tip their load all at once, and all the material moves in in mass,” Morrison says. “That helps fight segregation. With this MTV, more so than others we’ve used in the past, you can dump in mass without it plugging up. With the MT 3000-2i, we can dump ‘shock’ loads, and it never fazes it.”