Since its introduction in 1989, the Shuttle Buggy has evolved and changed. 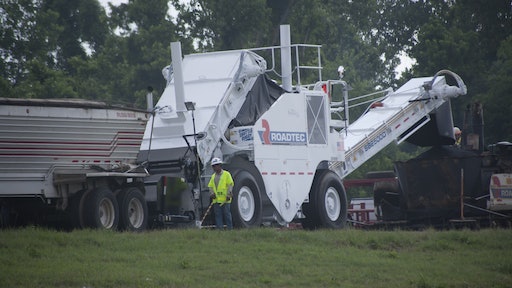 Material transfer vehicles (MTV) have proven their value. Over the years, Shuttle Buggies or MTVs have been credited by paving contractors as being instrumental, if not key, to winning quality recognitions, paving bonuses, and smoothness awards.

The Roadtec Shuttle Buggy was originally introduced to minimize issues associated with transporting asphalt to a work site, as well as to reduce the material and thermal segregation that can occur during paving. MTVs are used to provide the paver with a regular supply of HMA. Most pavers can receive their supply directly from end-dump or live-bottom trucks, however in most situations it can be better to use an MTV, which is designed to supply thoroughly mixed HMA at the correct temperature.

Since its introduction in 1989, the Shuttle Buggy has evolved and changed. With recent technological innovations, it is safe to say that the new Shuttle Buggy is not your daddy’s MTV any more. It’s probably like comparing the 1989 Pontiac Turbo Trans Am to the brand new 2015 Corvette Zo6. Both are American-made sports cars, but that’s pretty much where the comparisons stop. As Car and Driver magazine states, it’s hard to “capture the full wow factor” of the new Vette with “the sheer ridiculousness of Chevy’s technological and engineering achievements.”

Similarly, the new Roadtec Shuttle Buggy offers “technological and engineering achievements” that surpass the first machines that created a new equipment category more than 25 years ago.

The Roadtec SB-2500e Shuttle Buggy MTV offers refinements that include:

Additionally, the Roadtec SB-2500e Shuttle Buggy MTV now offers an Autotracking Package, which automates the Shuttle Buggy so it can operate at a continuous speed in sync with a paver. The paver can set the speed for the Shuttle Buggy, which can prevent any defects in the mat resulting from stopping and starting the paver.

Without the Roadtec Autotracking Package, MTV operators have to continuously monitor and adjust their speed to keep the distance from the paver constant. With the Autotracking Package, that constant worry is eliminated and the speed of the Shuttle Buggy is automatically adjusted up or down to maintain a set distance from the paver. This option seamlessly links the paving train and improves operation by eliminating inconsistencies due to fluctuations in speed and distance.

Through a pendant control, the paver operator can enable or disable the Autotracking system and swing the Shuttle Buggy conveyor that feeds the paver. Two light towers on the machine indicate when the Shuttle Buggy speed is going to increase, decrease, or when it is maintaining the appropriate distance between the two machines.

Control switches for the Autotracking Package are also located on the Shuttle Buggy’s operator console. These controls allow the Shuttle Buggy operator to select between automation or manual modes. In either mode, the light towers provide continuous aid to the operator in judging the distance between the paver and Shuttle Buggy.

For paving contractors who have incorporated MTVs into their production train, the refinements and innovations incorporated into the Roadtec SB-2500e Shuttle Buggy may very well “capture the full wow factor,” especially when compared to the first MTV model introduced in 1989.

Threats to Pavement Quality… and A Solution