The combination of the Vogele MT 300-2i material transfer vehicle and Intelligent Compaction delivered average target density of 94% and optimal smoothness on California's S.R. 25. 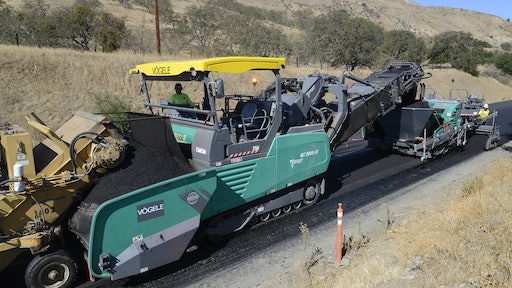 A Vogele MT 3000-2i material transfer vehicle was paired with a new Vision 5200-2i paver with VR 600 screed for the successful pilot project on California's S.R. 25, .

A Caltrans “pilot” project in October 2015 demonstrated both a new-design material transfer vehicle (MTV) and asphalt intelligent compaction (IC) on a two-lane highway in San Benito County, CA, on S.R. 25 near Tres Pinos, about 95 miles south of the Bay Area. The goal for use of these techniques on the rural S.R. 25 highway was to evaluate the use of a material transfer vehicle in obtaining a superior HMA pavement.

Prior to the overlay, Pavement Recycling Systems, Inc. (PRS) of California cold milled the existing highway by 0.2 ft., then in-place-recycled (CIR) to a depth of 0.2 ft. A Vögele MT 3000-2i material transfer vehicle was then paired with a new Vision 5200-2i paver with VR 600 screed for the paving process. Intelligent compaction (IC) was provided by the Hamm Compaction Quality (HCQ) system mounted on an HD+ 140 VO breakdown roller, a GRW 280i pneumatic roller as intermediate roller and an HD+ 120 HF compactor in finish mode. HD+ 70i and HD 90 VO compactors were used for the CIR layer, and also were equipped for HCQ.

As is the fashion out west where asphalt plants may be a great distance away, HMA is placed in large volumes by bottom dump trailers in windrows down the center of the lane. The HMA is then picked up by a windrow elevator and placed in the hopper of a paver - or in this case, the hopper of the MT 3000-2i, and then to the hopper insert of the paver.

Powered by a 215-hp Deutz water-cooled, Tier 4 Interim-compliant engine, the MT 3000-2i can move 1,300 tph and allows paving to continue at a consistent speed without any problems with starting and stopping, stated Mike Burns, Wirtgen Group product specialist for Nixon-Egli Equipment Co. “It also fights segregation by moving material belt to belt, rather than with paddles," he added. "And when it drops into the hopper insert of the paver, the hopper funnels the material to the center, instead of allowing large rock to roll to the sides.” A grid plate across the top of the receiving hopper breaks up chunks of asphalt, as well.

Caltrans engineers were impressed. “The MTV provided mix with no segregation and consistent temperature throughout. And when the MTV put the mix in the hopper insert of the paver, the paver laid it down perfectly,” said Abdalla Naas, assistant regional engineer for Caltrans District 5, San Luis Obispo. "I have never seen two machines that worked together so well to produce such a good mat.

“There was no segregation, and no raveling," he added. "When you drive on the mat it’s as smooth as can be."

The VR 600 screed Vision 5200-2i paver and Niveltronic Plus grade and slope control system played a substantial role in this. “When you see the quality of the mat, it says that the screed is excellent,” Naas said. “Also, the side-mounted sensors... catch irregular spots in the pavement and smooth over them completely.”

MTVs are not currently required under Caltrans specs, but rather used at the discretion of the contractor. “They may be required in the future,” Naas said. “If it comes to that, I would like to see these machines work in California more often.”

Additional Features of the MT 3000-2i

“Just like the sonics on grade control, or on augers, where you control the pile height or the depth of the screed by bouncing a signal off a fixed location, the lasers of the MTV do the same thing between the MTV and the paver,” said Mike Burns, Wirtgen Group product specialist for Nixon-Egli Equipment Co. “By adjusting the laser to point at the front of the paver, you set minimum and maximum distances, and the MTV holds forward movement in the middle based on the speed of the paver. The paver then dictates the speed of the MTV, and the MTV operator doesn’t have to constantly adjust speed to stay in range, but just concentrates on staying the course.”

Active remixing is achieved by two 16-in.-diameter conical augers in the receiving hopper. Both primary and secondary conveyor belts are 43 in. wide, and are heated to keep material from sticking and eliminate “warm-up” loads. The secondary conveyor can swing 55° to left or right. Heated scrapers also keep the belts constantly clean with a minimum of fuss.

As the receiving hopper empties in advance of the next dump, a rear-tilting front of the hopper will move stray material toward the conical augers. Conical augers minimize end of load and start of oad segregation.

The remixing system has variable volume, which comes with variable pitch or variable diameter. With conical augers, the surface area of the blade is smaller at the larger end of the shaft, and the largest blade at the narrowest end of the shaft. As the material moves, it creates a difference of volume from one end to the other.

The feed system has an auto feed function that will automatically slow or shut down feeding when the paver hopper insert is filled; a maximum delivery override switch will deliver material at maximum throughput for instant filling of the hopper insert. The belt conveyors can unload any typical dump from haul trucks without coking. This, along with the auto feed control system, eliminates the need for a dump person.

A collision bar on the paver insert will halt Vögele pavers if they get too close to the MTV.