Since the start of 2017, the Transportation Investment Advocacy Center has tracked over 130 transportation funding bills being considered in 36 states. 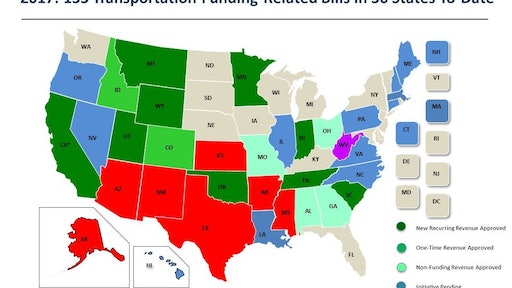 Since the start of 2017, TIAC has tracked over 130 transportation funding bills being considered in 36 states. This number closely matches the amount of legislation TIAC tracked over the same time frames in 2015 and 2016, and is projected to grow as new bills are introduced throughout the year.

Motor fuel taxes remain the most popular revenue proposal vehicle in 2017, with 42 bills introduced in 21 states that include a motor fuel tax increase. Non-fuel tax recurring funding is the second most proposed topic, with 30 bills including either registration fee increases, tolling, sales taxes, license and weight fees, or another source of revenue that would continually contribute to the state’s transportation fund. Local funding and electric vehicle fees are also increasingly popular transportation revenue topics this legislative session.