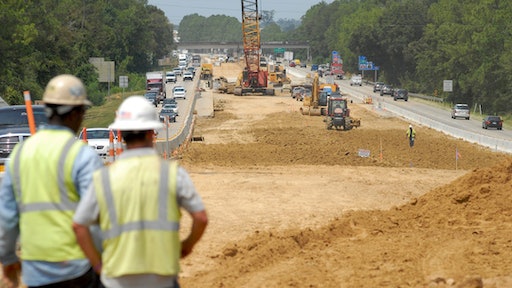 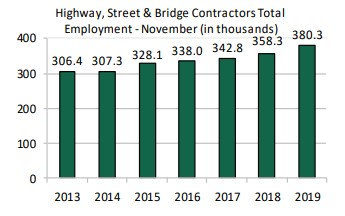 Road and bridge construction employment increased 5% from 2007 levels during the first 11 months of 2019. December 2019 data will become available in February.ARTBAHighway, street and bridge contractors employed 380,300 workers in November 2019, a 6.1% increase from the same month in 2018, according to the latest data from the Bureau of Labor Statistics.

This is the sixth consecutive autumn of job growth in the transportation construction sector, with levels above pre-recession employment in September, October and November 2019.

Road and bridge construction employment increased 5% from 2007 levels during the first 11 months of 2019. December 2019 data will become available in February.

The Associated Builders & Contractors Association (ABC) agrees stating that the overall picture for public spending remains bright. Infrastructure outlays remain strong despite a total lack of a government plan with state and local governments coming to the rescue with continued building projects. Key construction segments such as water and sewer, transportation and highway and streets continue strong nationwide. ABC chief economist Anirban Basu points out that these elements have pushed the infrastructure segment higher than the commercial, institutional and heavy industrial segments.

General construction employment has grown for nine consecutive years, but remains below 2007 levels.