According to a report from ARTBA, the value of highway and bridge contract awards was up 4 percent last month compared to the same time last year. 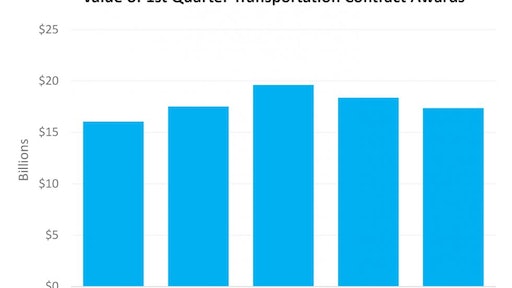 Despite the broader economic slowdown, state and local governments continue to ramp up awards for highway and bridge construction projects. Alison Premo Black, chief economist for the American Roads & Transportation Builders Association says that they now have a clearer picture of the market situation with May data now in hand.

Premo Black says that in all, 24 states and Washington, D.C. increased the value of highway and bridge contract awards between March and May compared to the same time period in 2019. The value of highway contract awards was up 4 percent to $16.4 million between March and May from $15.7 billion last year. Bridge awards were $4.8 billion this year compared to $4.3 billion in 2019. The increase in work was led by projects in Washington, Texas, Indiana, Pennsylvania and California.

"The value of work was down in some states that have expressed revenue concerns, including North Carolina and Kentucky," she says. "The value of contract awards was also up 12 percent for waterways, but down 70 percent for transit and 55 percent for airport runway projects."