All in a Weekend’s Work 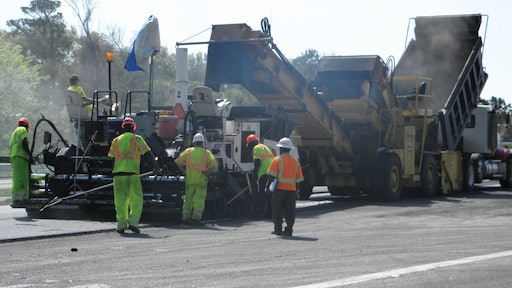 The first lifts of new asphalt were staggered and then the Millimeter GPS+ was used for joint-matching. Banks Construction saved an estimated $70,000 on milling and paving by using the automated grade control system on the project.

Fast-track highway improvements have little margin for error in terms of both surface grading and construction time. Construction managers at Banks Construction, Charleston, SC, are well aware of those realities when they undertake projects like the recent regrading and resurfacing of Interstate 526 north of Charleston. On that project, improving a stretch of two-lane roadway in a weekend meant that using the latest satellite-enabled grading technology wasn’t a luxury but practically a necessity.

The eastbound and westbound lanes of a 2.1-mile stretch of the four-lane interstate were scheduled to be improved on consecutive weekends in March 2012. Starting on Friday at 8 p.m., the existing asphalt surface on both lanes in one direction were milled, resurfaced with asphalt and then both lanes were reopened in time for the start of the work week the following Monday at 7 a.m. The work on the eastbound lanes was completed over a weekend in March, although the completion of the westbound lanes was delayed due to heavy rains and ultimately completed in stages.

The existing surface was more than 20 years old, but just as important as replacing the material was modifying the roadway superelevations, i.e., cross-slopes, to better facilitate safe vehicle operation, particularly when the pavement is wet. The rehabilitated pavement transitions from a 2 percent grade at the crown to a 6.7 percent superelevation at the shoulder edges. The pavement transitions at the bridge decks, too. The final tolerances were tight: three-hundredths of a foot (0.036 inch) for grade and two-hundredths of a foot (0.024 inch) for the cross-slope. Trey Cox, survey superintendent for Banks, pointed out that at desired cross-slope grade of 2 percent in a 12-foot lane, the tolerance was 12 feet times 0.002, or 0.024 inch. “It’s basically an airport runway tolerance,” he said.

The construction process involved milling the existing surface, first on the outside lane, then on the inside lane. The variable-depth milling averaged 3 inches, but the cross-slope correction added some variance to this. At bridge tie-ins, 5 inches were milled and this transitioned to 3 inches. As a result, hardly any of the existing surface was milled in some areas and in a few areas, the pavement was removed all the way down to the subgrade.

Banks’ automated grade control technology was invaluable on this project, due to the impact of the cross-slope correction on the depth of milling.

For two years prior to this project, Banks had used Topcon Positioning Systems’ Millimeter GPS+ system that combines GNSS and laser with hybrid laser technology, which was purchased from Georgia Surveyors Exchange, Savannah, GA. In addition to a GNSS base and rover, the system uses a PZL-1 Lazer Zone transmitter and a PZS-MC machine-control sensor and a PZS-1 rover sensor that gets integrated with the contractor’s GNSS receiver. The PZL-1 transmitter sends out a wall of laser light 33 feet tall and up to 2,000 feet in diameter.

The contractor can link up to four transmitters for a total reach of 8,000 horizontal feet and 132 vertical feet. The PZL-1 transmitter can operate multiple machines equipped to accept its signals. The GNSS component of the system plots the location of the machine while the laser component guides the machine to grade precisely. The system “knows” the three-dimensional position of the laser transmitter and the three-dimensional position of the machine and is then able to calculate the vertical angle from the laser up to the sensor on the machine and provide a vertical correction. This vertical correction occurs with greater accuracy than can be achieved with standalone satellite machine control.

Grade was consistently monitored on both sides of each pass with a pair of Topcon GR-3 GNSS receivers and Topcon’s new Tesla rugged field tablet equipped with Pocket 3D software. The Tesla runs on a Windows Mobile 6.5.3 operating system and has WiFi and Bluetooth wireless technology. The ultra-bright, backlit LCD screen measures almost 6 inches and the unit weighs less than 2 pounds and is 5.3 inches wide and 8.6 inches long.

The software allowed Banks to check cuts and fills, layout points and the survey at various areas of the jobsite and gave one person control over grading for multiple machines. Cox said the Tesla’s capability of rapidly tracking multiple signal transmitters was a big plus and the software’s ability to handle large surface files and linework files gave Banks powerful data access on location.

Dual Millimeter GPS+ antennas were set up on a Wirtgen 2200 SM (Surface Miner) so that the milling depth could be monitored on both sides of its 12½-foot-wide passes. The milling subcontractor, PP&S Inc., Greenville, SC, also utilized a Wirtgen W 200 cold milling machine that milled the shoulders with 6½-foot-wide passes. Two Roadtec 195 pavers equipped with Eagle screeds also had dual Millimeter GPS+ capability.

Near the north end of the project, a HiPer+ base station was set up in the highway median. Because this covered a long distance as most paving projects do, an external 35-watt radio was added to the HiPer+ base station to ensure the reliability of the latter’s signal transmission. By comparison, the HiPer+ base station’s built-in radio has 1 watt of power, which is adequate in most situations. “We had some minor issues occasionally due to being at the bottom of the hill, maybe,” Cox said. “But we were still getting signals. In those situations, there was just a two- or three-second lag between base shots.”

Off to the side on the outside shoulder, four PZL-1s were set up and spaced at roughly 800 feet, providing a total of more than half a mile of laser coverage. As needed, the transmitter located farthest from a milling machine or paver would be moved to the front of the line. “The milling machines traveled maybe 30 feet a minute and we never stopped once to wait on transmitters to be moved ahead,” Cox said.

Randall Brown, owner of Georgia Surveyors Exchange, pointed out that the grading system is particularly beneficial when variable-depth milling and paving are necessary because it essentially turns a two-step process into a one-step process. “The biggest thing on this project above and beyond the cross-slopes was the variable depth,” he said, noting that a CAD file incorporating the variable pavement depths was used as the basis of 3-D file loaded into the system. Automated grade control eliminated the need for marking the variable depths on the pavement.

The first lifts of new asphalt were staggered and then the Millimeter GPS+ was used for joint-matching, with positive results, Cox added, much to his delight. He reported that shots of the pavement during milling had an average accuracy of two-hundredths of a foot.

Cox noted that automated grade control made a big difference on this challenging project. For example, every bridge approach along the route was milled and paved using the Millimeter GPS+ system and the cross-slope was checked for an accurate tie-in with the new pavement using an inclinometer, and the automated grade control was consistently accurate.
Most importantly, the use of the system translated to real dollar savings for taxpayers on this project. According to Cox, the use of automated grade control saved $20,000 in direct costs and $50,000 in labor costs because milling and paving lifts were done right the first time within such a tight timeframe.

“This is basically a highway being held to runway tolerances - that’s the difficult thing,” he said. “When you get on a runway, you’ve got time to set up and you’re running nice, straight pulls. Here, we were being held to quarter-inch tolerances and you’re going into basically 2 percent crown road into 6 percent superelevations, back through transitions and tying into bridge decks. We never would have been able to hit the grades without Millimeter- we would have been all over the place.”

Technology Keeps You Ahead of the Curve