Is This the Golden Age of the 8-ft. Paver? 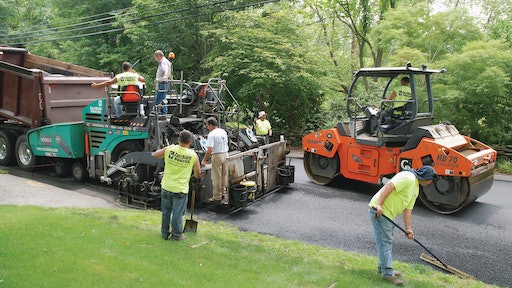 "Contractors should pick an 8-ft. paver for maneuverability and versatility, not if they're looking at putting down thousands and thousands of tons of asphalt," says Brodie Hutchins, Vogele general manager.

Big boys like to play with big toys, and that's just one of the reasons many contractors are constantly looking ahead to the day when they can buy their first 10-ft. asphalt paver. But unless you're doing highway paving, placing huge tons of hot mix in long straight pulls, the 8-ft. paver has become the machine of the moment – and probably of the future.

"There's really not a market for 10-ft. machines anywhere in the world except for North America," says Brodie Hutchins, general manager of Vogele, which manufactures the Vision Series 10-ft. and 8-ft. lines of asphalt pavers. "North America is a pretty unique paving market where 10-ft. machines are normal. Europeans wonder why we run 10-ft. machines when we could run an 8-ft. machine."

One of the reasons contractors in the U.S. and Canada run (and continue to buy) 10-ft. pavers is simple: Because they always have. "People are really not changing pavers," Hutchins says. "If they've always bought a 10-ft. track paver they're continuing to buy 10 ft. tracks. That's just how it's been and how it's going to continue most likely."

And there's also loyalty. Manufacturers say sometimes contractors base their buying decision on the types of jobs they do but for the most part "it depends on what they have been using because paving contractors are really loyal to their paver. It's one of the machines that's got that Harley Davidson appeal to it," Hutchins says. "They don't refer to it as their paver they refer to it as the manufacturer."

A Shift in the Market

Despite the interest in "bigger" and the loyalties of contractor to machine, the 8-ft. asphalt paver is becoming the dominant paver in the market for a variety of reasons including maneuverability, versatility, weight, cost, and the fact that today's 8-ft. machine offers much of the technology of the 10-ft. machine. Plus, John Mooney says today's 8-ft. paver can do 95 of 100 jobs a 10-ft. paver can do – and with substantially less initial investment.

"For contractors thinking of getting into the paving business, the 8-ft. paver could be everything a contractor needs," says Mooney, Paver and Milling Product Manager, Volvo Construction Equipment. "They are very easy to learn, almost self explanatory, because there's less going on — fewer bells and whistles."

Jim Harkins, northeast territory manager for VT Leeboy, says another way 8-ft. pavers cost contractors less is they require less maintenance than 10-ft. machines. "It's strictly due to the tonnage that's going to go through them," he says. "An 8-ft. machine is capable of putting down a lot of tonnage but the jobs are generally smaller. So even though it's capable of putting down tonnage the 8 ft generally doesn't see the tonnage a 10 ft. does, so less maintenance is the result."

Sales Can Turn on Maneuverability

When marketing 8-ft. pavers manufacturers stress maneuverability because it is so important on parking lots where tight spaces, islands, and light poles are common – and because it's an attribute that blows away the 10-ft. machines.

Harkins says an 8-ft. paver is considerably shorter, smaller, and narrower than any 10-ft. machine. "A shorter paver is more maneuverable on jobsites, makes it easier to pave in and out of corners, and results in less handwork for the crew," Harkins says. "A 10-ft. paver on a parking lot might get in its own way, but get it out on the highway work -- that's where the 10 ft. really shines."

Mooney says that though it's smaller, an 8-ft. paver can do a very nice job on county roads and commercial projects. "In many areas, for example, there are a lot of county roads in tight areas, trees, wires, and telephone poles and a 10-ft. machine just isn't easy to use in those tight situations," Mooney says. "The turning radius is much less on an 8 ft. than a 10 ft., and that makes it ideal for anyone paving areas other than long straight stretches."

Another advantage to an 8-ft. paver is that it is much easier to move to and from jobsites. "The weight, length, and width allow contractors to put more machines on low-boy trailers, making it easier to move their equipment around," Mooney says.

Harkins says that hauling more than one piece of equipment on a trailer is more cost-effective. "A skid steer and a paver, a roller and a paver -- when you can haul them together on one trailer it saves them money," Harkins says.

A byproduct of the size of the 8-ft. paver is its reduced weight. Harkins says a 10-ft.paver typically weighs in excess of 28,000-30,000 lbs. As a result it might have difficulty paving on soft soil. "An 8-ft. paver is much lighter and can get in and pave on sub bases that might not hold up to heavier weight," Harkins says. "The bigger paver will get stuck on some of that base if it's a little soft."

He says productivity of the 8-ft. machines has improved over the years as developments on 10-ft. machines are now often found on the smaller pavers. "The 8-ft. paver definitely has been enhanced over the last 10 years as contractors want smaller pavers but want to maintain their productivity," Harkins says. "So auger size, among other technology, has mirrored the 10-ft. paver."

Mooney says there's no question a 10-ft. highway paver out-produces an 8-ft. paver because the highway machine's hopper, tunnel, and augers are bigger and are designed to push through more material. In addition there's higher compaction out of the back of the 10-ft. screed because the screed is heavier than an 8-ft. screed. But, he adds, the screeds themselves are very similar, with the 8-ft. model simply being smaller.

Harkins agrees that screed technology on 8-ft. machines has been improved, particularly the electrically heated screeds which used to only be available on 10-ft. machines. "The finished product coming out of the back of the machine is virtually flawless," Harkins says.

But manufacturers don't just view themselves as selling equipment, they see themselves as problem solvers for contractors and in that light they make sure to learn what types of problems each potential paver purchaser is trying to solve.

"If someone comes looking for a 10-ft. rubber track paver we always talk about application because some people come in asking for a machine they just don't need," Hutchins says. "If we know how they're planning on using it we can make them aware of other machines that might be better tool for their application. Not that we always change their mind but we do want to make them aware of an alternative that might work better for them."

"So far they're not looking for 8-ft. pavers unless we bring it up to them. We don't just sell equipment to our customers, we're a solutions company and that's why we focus on the application first because that helps define what kind of paver they can best use," Hutchins says.

"In some cases we try to tell contractors 'why spend $350,000-plus on a machine that will require you to spend more on fuel, that you have to have a permit to trailer, and where the residual value declines quickly? Why not buy an 8-ft. machine instead?'" Hutchins says. "It's easier to maneuver; you can place a lot of material-- it's not like it's not capable of putting down tonnage, and in five years the residual value of the 8-ft. machine is going to be higher than the 10-ft. paver."

How Asphalt Pavers Have Improved