Paving for Horse and Buggy 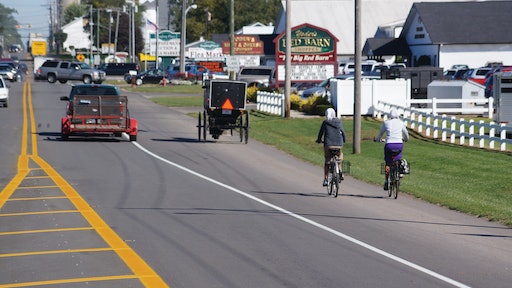 Brooks Construction repaired, milled and overlayed road and shoulders that were damage by horse shoes and buggy wheels.

Patching and milling highways and shoulders isn’t that unusual for many paving contractors, but the job Brooks Construction Co. of Fort Wayne, IN, completed last year on a 2 ½-mile stretch of State Route 5 in what is known locally as Amish Country had its challenges.

Yet Brooks Construction not only completed the work and received an incentive bonus, the job was selected as an award winner by the National Asphalt Pavement Association. Founded in 1909, the family-owned Brooks Construction Co. is run by the third generation, John Brooks and Andy Brooks, operating seven HMA plants (including two portable units) throughout northeastern Indiana.

Steve Koble, vice president at Brooks Construction, says the contractor does site work and concrete work on its paving jobs but considers itself primarily a paving contractor. “Some years we do 60% commercial and 40% highways and other years it’s just the opposite. It just depends on the year,” he says, adding that the company runs three pipe and dirt crews, three grade crews, four concrete crews, two patching crews and four paving crews.

Koble says State Route 5 job ran through the heart of Shipshewana, IN, and its heavily Amish commercial district. The road varied from 24 feet to 69 feet wide and shoulders ranged from 2 feet to 20 feet wide though most shoulders are 8 feet wide -- just enough to enable a horse and buggy to pull over to allow other traffic to pass.

Koble says the company has done work before in the Amish community and it’s the large volume of horse-and-buggy traffic that creates the pavement challenges Brooks faced on this job.

“The shoulders make it safer for the buggies to get around,” Koble says. “In some areas they travel on the mainline road but this is a big truck route so there are plenty of opportunities for them to travel on the shoulder to avoid truck traffic.”

Whether on the main road or the shoulder the horse and buggies create a lot of damage to the pavement. “The horseshoes are steel and they really tear up the asphalt, and the narrow buggy wheels generate so much pounds per square inch pressure that they create very deep, very narrow ruts, what we call ‘buggy ruts’ around here,” Koble says. “The horseshoes scrape the pavement exposing the aggregate, and the ruts are so deep they can’t be milled out.”

So Brooks Construction bid the job which required patching the ruts, milling the surface, and repaving with a mix containing steel furnace slag to strengthen the pavement. They completed the job, including concrete curb and gutter and handicap-accessible cuts, in 20 working days spread out over 10 weeks.

“One of the restrictions on the project was we could only work on Mondays and Thursdays, so that made the job a little more complex,” Koble says. “Luckily we had another job nearby so we kept moving from one to the other but we couldn’t be as productive as we typically are because we had so many days in between that we couldn’t work.”

He says the reason for the restriction was very busy sales and flea market-type events on Tuesdays, Wednesdays and Fridays that the community of Shipshewana didn’t want disrupted. “But we knew that going in so we just factored that into our bid and worked and scheduled around it.”

Horse-and-buggy traffic leaves behind a “debris” unlike almost all other paving jobs, so this job started each day with Brooks’ crew having to remove manure from the pavement. Koble says the crew used a Bobcat skid steer outfitted with power broom and hopper attachments to sweep the pavement, then dumped the hoppers onto a flatbed for hauling away.

“You just don’t run into that type of surface cleaning very often,” he says. “And not being able to pave every day means that every day we went out there we first had to clean the pavement. It wasn’t a difficult part of the job but one that added to how long it took us because instead of cleaning it just once or twice we cleaned it every day we were out there.”

“In Indiana we do the patching before the milling because you get a better overall job,” Koble says. “Once the patches are milled any deviation or undulations in the patches gets smoothed out and the finished paving job is that much better and much smoother.”

Koble says that while this job did not require a profilograph Brooks Construction regularly exceeds profilograph specifications and receives incentive bonuses based on those readings.

Once the pavement was patched a subcontractor using a Wirtgen machine milled 1 ½ inches off both the main road and the shoulder, and Koble says the work day restrictions were felt most at this stage of the job. He says Indiana requires milled pavement to be overlaid within five days so the contractor couldn’t allow the milling to get too far ahead of the paving.

“With Tuesday, Wednesday, Friday, Saturday and Sunday out of construction we had to be careful because we can’t mill out too far. This is where the nearby job really came in handy because we were able to work both jobs back and forth,” Koble says.

Once the crew was able to start paving they used what Koble says is the contractor’s typical paving approach: A Roadtec 2500 shuttle buggy transferred the mix to a CAT 1055-D paver. That was followed by a three-roller train with a Dynapac CC722 vibratory roller in the breakdown phase, an Ingersoll-Rand DD130 in the intermediate phase, and a Hamm HD120 DO as the finish roller.

All work was done amidst live traffic – buggy and otherwise – with flaggers regulating flow. Koble says that only one problem occurred when a horse, spooked possibly by a truck when halted by a flagger, took off and had to be reigned in by a Brooks worker.

Koble says the bid for the job specified use of steel slag in the hot mix, particularly on the shoulders, to help the pavement last longer and delay rutting caused by horse and buggies. This job called for CAPP (Certified Aggregate Producer Provided) steel slag #11 coarse aggregate and #24 CAPP steel slag sand.

He says Brook Construction has used mix with steel slag before, but in the past it has been considered a premium product, partly because it was more expensive because it had to be hauled in from steel mills in the Chicago area. But new smaller local steel mills have contracted with Brooks to provide the contractor with steel slag and steel slag sand. So because the product can be supplied locally it is more cost-effective and is no longer considered a premium-priced product in the northeastern Indiana market.

“Because it’s heavier than a conventional mix you are actually placing more tonnage than the bid calls for, so you have to adjust the bid accordingly,” he says.

He says the state of Indiana allows a mix adjustment factor of +/- 2% of what’s called for in the bid, which Brooks accounted for in the bidding to make sure the job would be profitable. “If the job calls for 165 lbs. per square yard and because the mix is more dense you are actually placing 175 lbs. per square yard you need to account for that in the bid. And it’s not just in the material cost but in the hauling, placement and compaction too.”

But he says the difference in mixes has little to no impact in the field. In fact, he says the only change in the field is in the tender zone of compaction, but the contractor always places a 300-ton test strip at the job location in advance of the work to make sure to get compaction right.

“We do it on every road job and on every commercial job where density is specified so that we can check density, compaction and make sure of the rolling pattern we need to use,” Koble says. “We do it right on the job. We take a day, lay 300 tons and leave and wait for the test results. That way we know the passing results before we start full production.”

The Occupational Risks of Road Paving