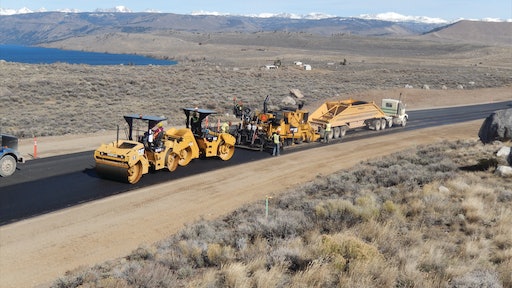 Mainline, production-paving contractors receive much of the industry’s attention. Yet there obviously is a need for small- and mid-sized contractors, too. They improve the local roads and provide niche services the larger contractors don’t.

The smaller contractors of course have the same demands regarding quality. This requires adherence to fundamentals and using state-of-the-art equipment that enable delivery of a high-quality product.

Teletractors Inc. of Pinedale, WY, is a smaller contractor that has found niches to fill. Pinedale, with a population of about 2,000, is about 90 miles south of Yellowstone National Park and is surrounded by three mountain ranges. It sits at an elevation of 7,100 feet and is in Sublette County, where approximately 80% of the land is public.

“We have to be diversified because we are in a small town,” says Lance Biffle, vice president of the company. “We handle all types of projects both large and small — underground utility work, general excavation, road work, sand and gravel sales, and asphalt sales/paving. We are becoming more specialized in aggregate sales and as an asphalt paving contractor.”

Fremont Lake Road is one of the larger projects Teletractors has taken on as a general contractor. “It was also the biggest paving job,” Biffle says. Experience gained from other jobs made the step to the larger project manageable.

“We learned from previous work, as 2013 was our sixth year in the paving business,” Biffle says. “We started out paving parking lots and driveways, then moved on to city streets. A sizable county road project was the next goal, and Fremont Lake Road was it.”

The project called for paving 2.6 miles of the road, which has two 13-foot travel lanes and an accompanying 8-foot-wide bike path. The curvy road has steep grades and a 40 mph speed limit.

Placement of 14,000 tons was required, though poor weather meant only half of the bottom lift could be completed before winter arrived. The mix featured ¾” stone and 70-28 oil.

Belly dumps hauled the mix approximately 4 miles from the plant to the jobsite. The mix was about 325º F upon arrival, 300º F when placed and 280º F when compacted.

Challenging weather led to delivery and temperature adjustments. The cold temperatures required the mix to leave the plant hotter than normal, and to be dumped close to the pickup machine. The crew kept a close watch on plant output, paving speed and the trucks’ cycle time to ensure mix was hot when delivered. The cold fall weather heightened segregation concerns, so extra attention was given to proper loading at the plant. On the jobsite, a windrow elevator also helped prevent segregation.

“We like the idea of using a windrow elevator so continuous paving can be achieved,” Biffle says. “Windrow elevator paving also eliminates end-dump truck exchanges and the risks of a truck rolling away when negotiating up and down hills that were encountered on the job.”

The Cat AP555E Asphalt Paver with AS2252C Screed handled the paving work. Plans call for placing two lifts of asphalt over the 2.6 miles. A 2-inch base lift was placed in late fall, with a 2-inch surface lift scheduled to be placed in spring when warmer weather returns.

The paver moved at a pace of about 20 fpm based on plant output of 160-180 tons per hour. Joints were tacked and then placed with around 1/2 in. of overlap.

“We had to stay really close to the paver because of the cold temperatures,” Biffle says. Breakdown compaction occurred at about 280º F, while the mat temperature was about 200º F during finish compaction.

The work, started late due to circumstances beyond Teletractors’ control, went well despite the onset of cold weather.

Biffle believes the commitment to fundamentals was crucial given the quickly cooling weather. Enrollment in Cat Paving Operations Training the previous winter paid dividends when it was time to pave the road. The training focuses on segregation prevention techniques such as proper head of material, auger utilization, proper dumping and continuous movement.

“Last winter, three of us went to the training in Florida,” Biffle says. “ It really helped us with the fundamentals of paving and gave us the confidence to take on bigger projects.  It was also a great way for us to familiarize ourselves with our new Cat paver before taking it out on the job.”

Sticking to fundamentals worked, with a quality mat produced in challenging conditions.

Adaptability. “We have commercial applications, 2.4 m (8-ft.) pathways, city streets and county roads,” Biffle said. “The paver is easy to steer and maneuverable. It performs well in tight areas, and it’s easy to make straight pulls or paving passes, too.”

Teletractors works at high altitudes, and the paver adapted to the temperature change. “The electric screed heat is great in cold weather applications, especially when moving around a lot or when doing work such as approaches,” Biffle said.

Operator friendly. The user-friendly operator controls made a quick impression on the Teletractors’ crew. “We also immediately appreciated the swing-out operator platform,” Biffle said. “It’s much easier to see and follow a guide when performing narrow width paving, such as an 8-ft. (2.4 m) bike path.”

The Mobil-trac™ system. “The system makes it much easier to climb in and out of saw cut areas or curbed areas without damaging the concrete or existing surface edge,” Biffle said. “The smooth tracks are much easier on the sub-grade and still provide great traction. If you accidentally run over a pile of material or have to cross a manhole or obstacle, the Mobil-trac system is much more forgiving and prevents screed movement that can affect smoothness.”

Cat Grade and Slope system. “We really like how the system is integrated into the machine,” Biffle said. “We also like that it’s a Cat machine with Cat dealer support.”

Setup is easy, he said. “There are not a whole bunch of components and cords that have to be handled at the start and end of every paving day,” he said. “We like how everything but the sensors stays on the machine at all times. This decreases the likelihood of damaging the system.

“The display is easy to read and is visually easier to determine the control functions just by looking at the screen. It is very easy to use and to train someone who is not familiar with the system. It’s really great being able to use the split screen mode so you can see what the other screed operator is doing at all times. This also helps with training.

“We also like how the temperature sensors are built into grade sensors.”