Asphalt Paving Spruces Up Resort for Botanical Expo in Turkey 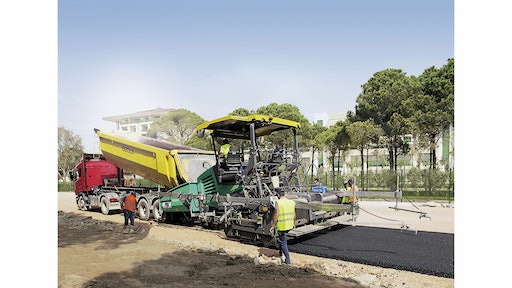 The new “PaveDock Assistant” eliminates misunderstandings between lorry driver and paver operator during transfer of the mix.

The region of Antalya is being spruced up for Expo Botanik 2016. Everything is being made brighter and more beautiful, newer and more luxurious – especially hotels and roads. This includes the Regnum Carya Golf & Spa Resort, a five-star oasis right on the seafront which has been opened officially in the summer of 2014. The 500 meter approach road to the hotel was completed in April. The roadworks comprised a 15cm crushed-stone base and a 10cm asphalt base. The asphalt surfacing was paved a short time later. During this road building project in front of the luxury hotel, the VÖGELE SUPER 1900-3 proved that it also deserves a five-star rating – for versatility and flexibility.

The company Antmos Asfalt has three VÖGELE pavers. According to Site Manager Serdar Kocyigit, the new SUPER 1900-3 is one of the best “workhorses in the stable” owned by the road construction specialist in Antalya. And for good reason: the bulk of the company’s contracts are for access roads, connecting roads and highways with varying requirements – encompassing everything from pure pavement rehabilitation jobs to the construction of new roads. It stands to reason, then, that a powerful and versatile paver with a laydown rate of up to 900t/h like the SUPER 1900-3 is an absolute must-have machine. After all, it can be used for a wide range of jobs and was therefore also the best choice in this case.

For a consistent paving quality

The Antmos Asfalt paving crew started by laying a 15cm crushed-stone base followed by a 10cm asphalt base. The SUPER 1900-3 came with a VÖGELE AB 600 TV Extending Screed equipped with tamper and vibrators. This screed has a basic width of 3m and extends hydraulically up to 6m. As on this job site the total pave width ranged between 10 and 12m, the SUPER 1900-3 laid two strips of 4.5 to 6m each. As a result, the machine had to be repositioned several times.

The new “AutoSet Plus” repositioning and transport function was a valuable aid on this job site and guaranteed a consistent paving quality. This useful function works as follows: the paver is put into transport mode automatically with a single push of a button before repositioning – the hopper front, auger, screed and deflectors in front of the crawler tracks are raised, conveyors are reversed, the screed is locked in position and all the settings are saved. After repositioning, another push of the button is all it takes to reset the systems to the previous working positions. The “AutoSet Plus” function is hence an invaluable asset on building projects like the one near Antalya, allowing a consistently high paving quality and saving a great deal of time.

As already mentioned, the pave width of each strip varied between 4.5 and 6m. This is why the contractor opted for the VÖGELE AB 600 TV Extending Screed, which allowed changes to be made in the pave width without a need for any conversion on the paver. The work was made easier still by another new “Dash 3” function. The ErgoPlus 3 screed operator’s console comes with the useful “SmartWheel” for infinitely variable screed width control. Screed Operator Hüseyin Arkoc was impressed: “With the ‘SmartWheel’ I can infinitely extend and retract the screed with one finger. And I can do this at two speeds: slow if I want to go along an edge or fast if I want to extend or retract the screed quickly."

For safe transfer of the mix

Communication problems between the feed truck driver and the paver operator are now a thing of the past. The new “PaveDock Assistant” simplifies the process of transferring the mix from the lorry to the paver through the use of clear light signals, e.g. for reverse, stop, dumping the mix, etc.

The efficient, hitch-free completion of the whole project was down not least to the new ergonomics functions of the “Dash 3” paver, since everything which makes the work easier boosts the concentration of the team, enhancing the paving quality in the process. With its “Dash 3” generation, VÖGELE have once again set a singular milestone in user-friendliness and quality.