The Key To High RAP Production 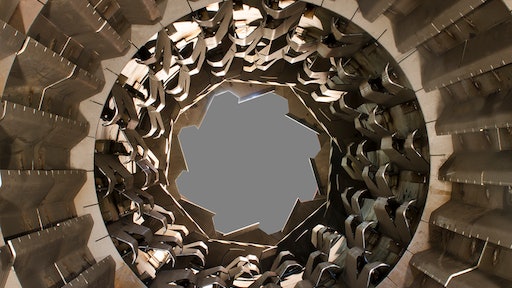 It's difficult for most asphalt plants to run the wide range of mixes demanded by the industry these days. High RAP (reclaimed asphalt pavement) mixtures tend to overheat the bags in baghouses, which are the air pollution control systems on all asphalt plants.

You can add more flights inside the drum to increase the density of the veil. That will reduce the stack gas temperature to the point that you can run high-RAP mixes. But a problem arises when you try to take the same drum, with the added flights, and run a 100% virgin aggregate mix. Now the veil is much too heavy for virgin mixes and not enough heat will escape to keep your baghouse up to temperature. And a baghouse that becomes too cold will cause mud deposits to build up on the bags because of moisture condensation. What's more, mud may build up in the feed end of a counterflow dryer or within the exhaust ductwork itself. With mud amassing throughout the system, the plant's operation may slog to a halt.

At Willets Point Asphalt Corp., Flushing, NY, owner Ken Tully uses his Astec Double Barrel plant with a warm mix system to run both virgin mixes and mixes with 40% to 45% RAP — or more — in them. Until recently, he would get high stack gas temperatures with high-RAP mixes, and low stack temperatures with virgin mixes. "We had some problems in the baghouse with mudding of the bags," Tully says.

To resolve the problem, Astec installed its patent-pending V-Pack Stack Temperature Control System and stainless steel combustion flights. Those elements, plus some changes to the binder injection location, make up the Double Barrel Enhanced RAP. Tully's plant has been retrofitted with the system, which takes RAP capability above 60%.

A key element of the patent-pending V-Pack Stack Temperature Control System consists of "V-flights," which are patent-pending drum flights with a deep V-shape. They produce a uniform veil of virgin aggregate across the drum, regardless of how full the drum is, the plant's production rate, or the RAP percentage used.

Because the V-flights shower material uniformly without regard to how much material is in them, they never leave a hole in the veil. More revolutions per minute place more aggregate in the air.

"When you manually adjust your flighting with a virgin mix, it's very hard to maintain (stack gas) temperature because you have a lot of material in the drum," says Tully. "And then to go to a high percentage RAP mix, you have just 60% of the virgin aggregate that would be in there at 100% virgin. With this V-Pack, it enables you to run the target temperature that you're looking for.

"We set the stack temperature at 250 degrees F," says Tully. "Previously, we would be running like 350 degrees F on a high-RAP mixture. And we would struggle to maintain 220 or 230 degrees F on a virgin mix. The V-Pack system improves our production for high-RAP mixes, and even for virgin mixes, because it allows you to maintain that temperature and you can run it at higher speeds. Normally, we would run like 300 tph on a virgin mix, and now we can run 375 tph with the V-Pack."

Tully also runs warm mix with RAP in hisDouble Barrel plant. To make warm mix, he typically activates the foaming attachment on the plant that injects a tiny amount of water into the liquid binder — yet Tully only heats the asphalt up to 325 degrees F. He can achieve the same 375 tph as with a virgin mix.

Warm mix enables Willets Point to maintain workability of the asphalt mixture to a lower temperature than with conventional hot mix. "Conventional mix will be difficult to use after the temperature drops to 250 degrees F or so," says Tully. "But the warm mix will allow another 20 to 30 degrees of workability. If a regular mix has a problem at 250 degrees F, warm mix will be workable up to 230 or 220 degrees F. You'll still be able to shovel it, rake it, and get your compaction. If we ship out the warm mix at 325 degrees F, that will give them another hour and a half or two hours in the truck to allow them to use it."

Another asphalt producer to use the patent-pending V-Pack Stack Temperature Control System is C.R. Jackson Inc., Columbia, SC. The company runs a wide variety of mixes including both traditional hot mix, and warm mix, with and without RAP. The company tries to run as much RAP as possible. They also run an open-graded friction course mixture (OGFC).

The V-Pack System did produce the desired advancement on an Double Barrel for C.R. Jackson, saYS Malcolm Swanson, president of Astec, Inc. "We first saw this when making OGFC for an Interstate highway project," Swanson recallS. "Whereas the plant previously had been unable to make more than 150 tph of this particular mix, after the V-Pack was installed, the plant easily produced 350 tph of the same mix.