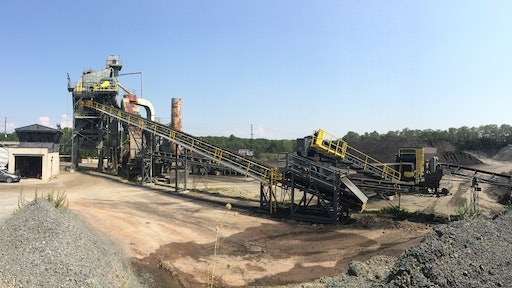 For years, batch plants have taken a back seat to drum plants when it comes to increasing the amount of reclaimed asphalt pavement (RAP) to mixes mainly because of the process itself.

On drum plants, RAP is fed into the process continuously. By having continual flow, the RAP and moisture in the RAP are being heated and moisture is being released form the RAP continuously causing minimal steam explosions. In a drum plant, the exhaust system on the plant can handle the smaller steam releases.

On batch plants, however, RAP gets weighed in a “batch” then dropped into the process at one time causing larger steam explosions. These steam explosions can push dust out of the seals on the mixers and create fugitive emissions issues with the batch plant.

“We’re seeing recycled material use sky rocketing in our industry,” says Jeff Meeker, president with Meeker Equipment. “And batch plants have been limited because of their design to adding only about 15% to 20% while drum plants have been increasing their RAP percentages to 40% or more.”

Close to 10 years ago, Meeker Equipment introduced the RAP-PAK to the asphalt production industry.

“The idea was to make batch plants competitive with drum plants again,” says Meeker. “How could we increase RAP percentages in batch plants and minimize the steam explosion?”

The solution to the problem lies in the RAP-PAK’s vapor recovery system, which evacuates the steam from the mixer by pulling a vacuum when the steam is released from the RAP.

“We pull the steam to the front of the dryer,” says Meeker. “This is similar to how steam is captured on many counterflow drum and two-drum plants.”

When the steam is not being pulled from the mixer, clean outside air is vented to the dryer. By switching from outside air and mixer air, there is a constant draft in the dryer.

In addition to controlling the steam explosion, the system offers another way to add RAP to the mixer.

In the RAP-PAK system, RAP is weighed on its own separate scale or weigh hopper.

“This gives a precise measurement of RAP for quality control purposes yet doesn’t slow the plant’s production capabilities because the RAP is being weighed simultaneously with the virgin aggregate the liquid AC,” says Meeker.

The RAP-PAK features a clam-shell gate and very steep-walled hopper to allow the stickiest RAP to flow to the mixer. RAP can be fed all at once or the gate can be “chattered” to throttle the feed rate to the mixer. Because the RAP is fed continuously, the steam explosion is controlled.

The RAP-PAK system works in conjunction with the batch plant’s existing batch controls. The mix design is entered into the batching control, which determines how much RAP is needed. The batching controls tells the RAP conveyor to start feeding RAP in to the Meeker RAP PAK weigh hopper. Once the weight is satisfied, the conveyor turns off.

The batch control then tells the RAP-PAK to drop its contents into the mixer. The RAP-PAK can “throttle” the RAP in to the mixer, which means the steam is released slowly and continuously.

The steam that is generated gets pulled from the mixer with an  exhaust fan and pushed into the dryer. When all the steam is released, the dampers close the ductwork to the mixer and opens to outside air. This process continues on every batch.

In order to add a RAP-PAK system, batch plants will typically need to add: an additional tower/structure; ductwork, bin, feeder and controls.

Putting RAP in the mix

"Our greatest benefit from this system is being able to put RAP in the mix," says Rose. "It helps reduce the cost and expense of production because we're not using all virgin material."

Typically, the Dolomite Group has both batch plant and drum mix facilities on site. Two of the RAP-PAK systems were placed at facilities that only housed batch plants and had to no capabilities to use recycled materials.

"Both those facilities can now produce mixes with 20% RAP, which is the maximum for the state spec," says Rose. "We have produced up to 25% recycle for commercial mixes, and I asked Meeker to design the system so it can go up to 30% if needed."

Rose says there are other systems like the RAP-PAK available in the industry, but his relationship with Meeker Equipment is what tipped the scales in their favor. "We've always had a good working relationship," he says. "The Meeker crew installed all of the systems we have, and they've been working just great."

Meeker says the bottom line with the RAP-PAK is a facility's ability to increase its RAP content. “The true benefit for batch plants adding this system is being able to produce mixes with 30% to 40% RAP continually,” he says. “Other benefits include accurate measurement of RAP and clean batch towers with no visible emissions.”

The one true advantage of a batch plant is its ability to make a variety of mixes without wasting materials, says Meeker. “By using a RAP-PAK, batch plants can now effectively compete with drum plants,” he says. “This system gives batch plants higher RAP percentages and versatility for various customer requirements.”