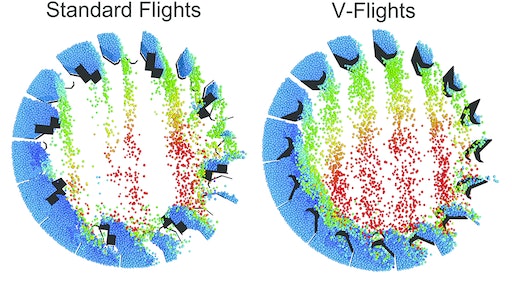 Astec’s V-Pack Stack Temperature Control System extends the range of mixes that can be produced without requiring that the flights be adjusted. The system’s “V-flights,” unique drum flights with a deep V-shape, and its use of variable frequency drives (VFDs), which provide control of the drum rotational speed, are keys to the control system managing an asphalt plant’s exhaust gas temperature and increasing overall efficiency.

Astec’s V-Pack Stack Temperature Control System uses the V-flights to produce a uniform veil of virgin aggregate across the entire drum, regardless of how full the drum is, the plant’s production rate, or the RAP percentage used. This is what enables drum speed changes to be effective as a means of controlling stack temperature. Since the V-flights shower uniformly without regard to how much material is in them, they never leave a hole in the veil.

The Astec V-Pack Stack Temperature Control System monitors the exhaust gas temperatures at the baghouse inlet as the primary reference for control. As the exhaust gas temperature rises, the control system checks it against a set point. When the temperature exceeds the set point, the control system speeds up the drum rotation, controlling temperature to the set point. The drum speed can be varied by the system from a minimum of about 7 rpm to a maximum of about 12 rpm (8 rpm is the normal speed for Astec drums without this system).

Applications of the V-Pack Stack Temperature Control System enable Astec to provide asphalt plants that produce mix with RAP content from zero to 70% without any physical changes to flights or other plant equipment and without loss of production rate capacity or fuel efficiency. Astec plants so equipped are also able to produce dense graded virgin mixes and open graded friction course with the same ease and efficiency.

The Key To High RAP Production