At some point warm mix asphalt may be routinely specified by state DOTs, and will likely provide an answer to issues with blue smoke - but a simple and cost-effective solution for asphalt plants is available today to control blue smoke. 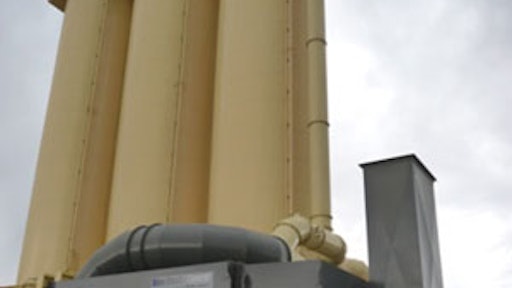 It is often the case with a new technology that excitement over its benefits is tempered by the need for additional research before use becomes widespread. While we all know that warm mix asphalt (WMA) isn't exactly new, interest in its use is growing as certain benefits - including reduced emissions - emerge. Yet we also know that greater acceptance of WMA will take time.

Forward-thinking producers have begun to view plant options that will allow production of WMA. But the routine specification of warm mix designs is still a long way off as state DOTs wait for additional research on long-term benefits. At the same time, companies that want to meet future regulations - and also be good environmental stewards and good neighbors - are looking for real-world solutions they can apply today to the problem of blue smoke produced in their existing HMA plants.

A Solution
Working to meet the need for better control equipment, Blue Smoke Control, a division of Butler-Justice, Inc., of Anaheim, Calif., developed its system to capture blue smoke from numerous points, including transfer points, silo filling and truck loading.

The collector features seven stages of filtration, with the final high-efficiency filter being 95% efficient at capturing particles as small as .03 microns (creating a filter that is equivalent to HEPA quality). But this high-efficiency filter is only the final component of the system. Because blue smoke is a vapor at high temperatures, a well-engineered ducting system incorporates the infusion of ambient air at key points to help coalesce the tiny droplets of oil (blue smoke) into a larger droplet that can be filtered out by the Blue Smoke Collector. The coalesced oil is drained from the filters via gravity and collected in a sump. In some asphalt plants, the collector pulls as much as five gallons of coalesced oil per day from the silo filling and truck load-out areas.

Since its introduction in 2002, a growing number of companies in California and across the U.S. are aggressively installing the Blue Smoke Control system in order to become a good neighbor today - without the need to build a new plant or expand an old one. To date, Blue Smoke Control has more than 50 of its collectors installed in the continental U.S., Hawaii, Mexico and Australia.

Alternative Solutions
Asphalt producers have fought blue smoke over the years with a variety of filtering and collecting systems. Typical systems used over the years include electrostatic precipitators, heating ventilating and air conditioning-type (HVAC) filter units, baghouse-type devices with a bag coating substance that resembles "kitty litter," and a recycle system that directs the blue smoke laden air into the combustion zone of the asphalt plant burner. The intent of the latter is to incinerate the oil droplets.

But each of these technologies has shortcomings that can create headaches of their own for producers - including their cost, efficiency, maintenance issues, waste disposal problems and fire hazards.

The Concern Over Blue Smoke
Across the U.S., but especially along the West Coast, environmental groups who have armed themselves with quick but questionable information that they've gained from the Internet seem eager to oppose any proposed new hot mix asphalt (HMA) plant. They ignore the fact that over the past 40 years, asphalt production has increased more than 250% while total emissions have been reduced 97%. And they ignore that in 2002, the EPA de-listed asphalt manufacturing as a source category for hazardous air pollutants. These oppositional groups have a very visible target - the blue haze that hovers over hot asphalt and carries much of the characteristic asphalt odor. We all know this haze as blue smoke.

As air pollution agencies also focus their attention on blue smoke, asphalt producers across the country are preparing themselves for new regulations. Routine specification of RAP, rubberized asphalt and polymer blends creates special concern because these specialty mixes are known to produce blue smoke.

At some point, after its long-term wear properties are better evaluated, WMA may be routinely specified by state DOTs, and will likely provide an answer to issues with blue smoke.  But a simple and cost-effective solution available today to control blue smoke is the Blue Smoke Control system.