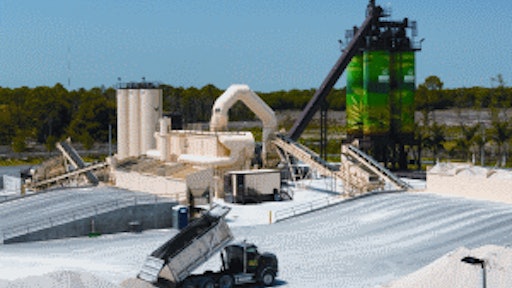 As a major producer of hot-mix asphalt (HMA) and ready-mix concrete in the southeastern region of the United States, S.T. Wooten Corp. recently demonstrated how "going green" can be much more than simply responding to the world's environmental concerns.

Three years ago, S.T. Wooten Corporation began planning for a new HMA facility on wooded acreage in Fort Myers, FL. Although the corporation had 13 HMA plants throughout North Carolina, they decided to expand into the southwest Florida area. Almost immediately the company encountered a number of unique challenges, many of which involved the environment.

Managers at S.T. Wooten decided it would be wise to use the latest state-of-the-art production technology: the Double Barrel Green System from Astec.

This unique system can process virgin aggregate and reclaimed asphalt pavement (RAP), mixing it with liquid asphalt cement in such a way to produce warm-mix asphalt (WMA).

The new Fort Myers plant quickly earned a reputation of being the greenest plant in the region. Not only did the company overcome a significant environmental challenge, but its resulting operation proved that ideas such as "green" and "sustainable" can have a positive impact on the corporate bottom line, as well as on the surrounding environment.

That's not to say the effort was easy. According to management of the company's Fort Myers Division, "A lot of planning went into this facility, particularly from the environmental point of view. We have probably gone much farther with our attempt to be environmentally friendly than most businesses. We don't think you will find another facility like this one anywhere."

When S.T. Wooten began the project in 2006, one of the first steps was to conduct a study of what wildlife might be impacted by the new plant. Such a study is called a Protected Species Analysis (PSA) and it must be done before any development can begin.

In this case, the PSA revealed a state-listed threatened species on the new property. Division Manager John Fischetti recalled that when he and Robert Peterson, area operations manager, would walk the property, burrows were evident at one end of the property - burrows that had been left by what they suspected were gopher tortoises. They hired a biologist to come in and do the PSA, and he confirmed that there were definitely signs of activity by gopher tortoises on the plant site.

In response to their findings, S.T. Wooten dedicated a portion of the new property as a wildlife preserve for these gopher tortoises.

But there were more "green" steps to take: The company also created a separate wetland preserve for bald cypress trees. And then they conducted a native wetland planting to serve as the perimeter of the facility. A substantial part of the 14.5-acre property has been set aside specifically for preserves and natural areas.

Some of the company's other efforts went well beyond the norm. They hired an environmental services company to hand-cut and remove all invasive, exotic species of vegetation, thereby helping to promote native plant growth.

A water-filtration berm was constructed to provide additional water cleaning through natural sand filtration. Everything else was covered in sod and then watered with an irrigation system that features reduced water usage.

These "green" efforts included several industry firsts. Located at the end of a tree-lined drive, the plant went well beyond the Green Building Standards of the LEED (Leadership in Energy and Environmental Design) certification standards. It also truly embodied the "green" promise for the local community. Even the storage silos are an industry first: Each silo was wrapped in a custom-designed green graphic that blends with the natural surroundings.

Beauty is more than skin deep

S.T. Wooten's emphasis on green building and sustainability is much more than just appearance. With management's extensive experience in the industry, the company also focused sharply on the business side of the equation. Instead of just a green facade, they worked hard to design a plant that would operate more efficiently and with less environmental impact - a plant that would also work to benefit the kind of green that should be reflected in the bottom line of the corporation.

Working extensively with Astec engineers, one key step in the planning process was S.T. Wooten's emphasis on using the best current technology for its new operation. The company relied on Astec's engineers. "They certainly helped us by giving us their best and latest technology. For example: They gave us a lot of direction with the design of our new tank-farm."

The new plant features a fully enclosed and sealed tank-farm for liquid asphalt cement. It was designed (a rubber membrane was installed around all of the wall and foundation joints) to prevent any spills from leaking into the ground, protecting the environment while helping the company avoid costly cleanups after an accidental spill or leak.

The new Astec Double Barrel Green System is an important component in the overall success of the plant's operation. This unique equipment allows the producer to make warm mix asphalt (WMA) at a temperature that is at least 50 degrees F lower than traditional HMA. This results in the use of less burner fuel and significantly lower emissions.

While warm-mix asphalt makes sense, achieving it on a practical level is not easy. The viscosity of the liquid AC must remain free-flowing at the reduced temperatures, allowing the mix to easily pass through all of the storage, transfer, and placement equipment. It will also remain more easily worked by hand.

Other technologies for WMA production rely on additives, special asphalt cement, special procedures, and special liquid-AC delivery systems to achieve low viscosities at low temperatures. These extra additives and extra steps can be expensive and increase the cost per ton of the finished mix.

Astec's multi-nozzle device eliminates the need for expensive additives and special asphalt cement by mixing a small amount of water and liquid AC together to create microscopic bubbles. These small bubbles act to reduce the viscosity of the AC coating on the rock, allowing the mix to be handled and worked at a lower temperature.

A computer control opens and closes these liquid-AC valves to adapt to variations in production rates, so each valve assembly and nozzle operates in a narrow range of liquid-AC flow and back-pressure.

This ensures consistent foaming in the foaming chamber. In addition to the 10 valve assemblies used for production, there is an eleventh valve located on the manifold that can be used for retrieving liquid-AC samples.

These and other controls provide for smooth and consistent operation of all the valves as production rates increase or decrease.

Water is supplied to the system via a skid-mounted 550-gal. corrosion-free water reservoir with an automatic filling valve that will keep the container full as long as water is supplied to it. If supply water is lost, a low-water alarm quickly alerts plant personnel so the problem may be resolved without wasting mix.

While delivering a product with improved workability, the warm-mix results in no smoke and no smell. There is even a higher percentage of recycle mix than with standard grade HMA. Companies like the S.T. Wooten achieve this with an average of 14% less fuel for each 50 degree F drop in mix temperature.

The future is now for green technology

For example, the facility has a new RAP-fractionating system. This stationary crushing unit allows the company to size their RAP into several sizes in order to take advantage of the AC content. There are also four, 300-ton silos and two load-out scales to allow for nearly continuous, parallel truck lines.

S.T. Wooten's management team is guided by a corporate philosophy that actively supports the pursuit of leading-edge operations. The team also feels strongly about putting up the best quality equipment at the beginning ... then maintaining it to the highest standards.

"When you do that, you will have a facility that is reliable, looks good, and will serve the community well ... now and in the future."