Wright Paving has plenty to be proud of in its new plant and approach to business. 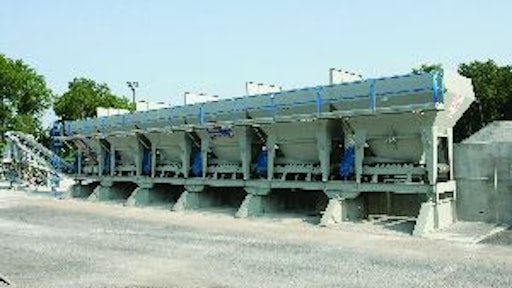 Wright Paving doesn’t necessarily want to be one of the big boys, but that doesn’t mean they don’t have to battle with them.

“We’re a mom-and-pop operation, and it’s a competitive business,” says Grady Wright, who oversees asphalt plants and trucking for the company. “The customers don’t care if you’re big or small. They care about quality and what they get for their money.”

The company has grown slowly over the last 30 years, always securing the business it has before trying to attract more. That approach meant existing customers were never short-changed.

“We believe in going from a crawl to a walk,” Wright says.

The latest move was the installation of a new asphalt plant in Shelbyville. The plant is all Gencor and all new, with the exception of an AC tank that was moved from another location.

“Our goal is to create a healthy and work friendly environment for our employees, consumers, and neighbors,” Wright says. “This plant should meet and exceed all of the issues stated.”

It took Wright Paving many years of hard work before making the move to all new equipment. The firm was started in 1978 by Grady’s grandfather, who ran three single-axle trucks full time.

“That first year in business, we did $180,000 worth of driveways,” Wright says. A few years later Tommy Wright, Grady’s father, took over the paving business.

The plan - then and today - is to grow steadily, to ensure success as much as possible before adding workers or equipment. That philosophy carried over to the plant operations in particular. The Wrights bought asphalt from outside sources until 1990, when they purchased used equipment and started their own plant.

The plant helped keep a steady flow of material to the paving crew and ensured the quality of the mix that arrived at the jobsite. The Wrights also sold mix to outside businesses. The volume of hot mix sales increased, and the paving operation grew as well.

Part of the reason was the work the family put in. “This is what we all do,” Wright says. “We’re all committed. This business has been a part of the family for a long time, and we are willing to do whatever it takes to make it successful.”

Also working at the company is Tommy’s wife, Norma, who runs the office; and Grady’s brother, Will, who works in a variety of capacities across the operation. Tommy remains on the job, tending to the paving crew and handling job estimating duties. As the business grew the Wrights looked at adding a second plant.

Making a final decision to open a plant took almost five years. “We wanted to ramp up first,” Wright says. “We needed to be as certain as possible the work would be there if we went ahead with the plant.” A good deal of that time was spent on research. “We looked at all the manufacturers, and our mixes,” Wright says. “We put a lot of effort into determining what manufacturer could provide a product that was the best fit for our mix.”

The Wrights also wanted the plant to provide competitive advantages. In addition, Wright officials believe their company delivers added-value - and they expect added-value when they’re on the purchasing side of the equation. “We seek the best equipment at the best price,” Wright says. “We get all our business by competitive bid. We expect our suppliers to be competitive as well.”

Purchasing the plant was about more than price; operational improvements also were necessary. Wright says the firm has realized those improvements with the new Gencor plant.

“We run 15 to 20 trucks per day,” Wright says. The paving operation handles many city and county street jobs, which require Tennessee DOT mixes. “Everything is designed and checked,” he says. “The specs are rigorous, and the plants have to comply with the standards.”

The new plant, with two silos, means he can have the best of both worlds. “We can keep ourselves running, plus service the others who buy mix from us,” he says.

Wright Paving’s older plant - in Lewisburg, TN, about 25 miles southeast of Shelbyville - has four bins with RAP. The new plant features six bins. The new plant - capable of producing 300 tons per hour - also can run on natural gas, diesel or waste oil. “With the volatility of the fuel market, you need all the options,” Wright explains.

But the biggest difference with the new plant might be the technology. “The controls set it apart,” Wright states. “It’s user-friendly, whether you’ve done it before or not. Overall, I think the technology - particularly the up-to-date controls - is the biggest improvement we’ve seen from the new plant. Of course the lack of maintenance also is a big change, but that’s to be expected with a new plant.”