The Shelly Company, an asphalt producer with 47 plants located throughout Ohio, puts new RapSaver technology to the test in an effort to economically increase the use of reclaimed asphalt pavement (RAP), while lowering emissions. 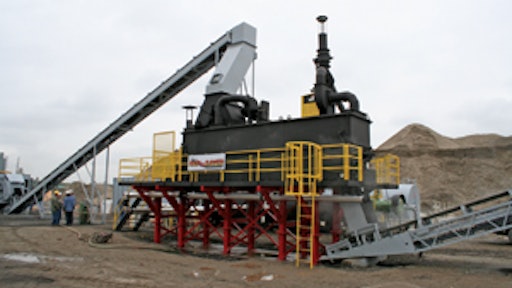 Embracing new technology can be an enormous risk, but if pursued correctly, the risk can pay big dividends. Case in point — an innovative asphalt recycling system, built by Burke Heating Systems of Shelbyville, KY, has been put through initial testing by an Ohio asphalt producer and preliminary reports indicate promising results.

Embracing new technology can be an enormous risk, but if pursued correctly, the risk can pay big dividends. Case in point — an innovative asphalt recycling system, built by Burke Heating Systems of Shelbyville, KY, has been put through initial testing by an Ohio asphalt producer and preliminary reports indicate promising results.

Known as the RapSaver, this patent-pending design is a completely self-contained recycle system that assists the main asphalt production facility to increase production; lower operations cost and reduce emissions. The first prototype of the RapSaver was erected three years ago to establish basic design operation in Carrollton, OH.

Why this new system?

Recycle usage has become more prevalent — it has become very advantageous and more contractors are recognizing the substantial benefits of utilizing this resource. Increased fuel, aggregate and liquid AC costs all have skyrocketed since the mid '80s. Federal and state DOTs have specified recycled asphalt for use in many mix designs. This is forcing producers to search for ways to use recycle at sufficient percentages economically, while minimizing the inherent problems that normally accompany RAP production mixes, such as blue smoke, temperature reduction and environment.

How does it work?

The RapSaver is a preheating system comprised of a continuously fed sealed conductive heating system that allows cold wet RAP to be heated and dried using a slow moving hollow screw heating auger and heated trough.

Heat exchange fluid is brought to a temperature level of about 600 degrees F with a direct-fired tube in tube exchanger or helically coiled hot oil heater. The hot fluid is pumped through the hollow jacket and the hollow auger flights slowly elevating overall RAP temperatures to 165 to 185 degrees F with a portion of the smaller particle sizes ranging in excess of 350 degrees F forcing moisture to escape.

In a single pass with variable 4- to 12-minute dwell times a process flow rate of 80 to 100 tons per hour can be achieved depending upon moisture content. With inlet RAP moistures of 5 percent of less, RapSaver has been able to dry RAP to 1 percent moisture and less in a single pass.

The Shelly Company, an Oldcastle Materials Inc. subsidiary with 47 plants in the state of Ohio had shown keen interest in the RapSaver prototype. On several factory visits to Burke's Carrolton manufacturing facility, Vice President Jim Tharp and Operations Manager Paul Protengeier were impressed with the RapSaver concept and production capacity and decided to install one at their #93 plant site in Columbus, OH.

"RAP is here to stay, and we felt if we are going to stay, we need to know and do more about using it," says Protengeier.

The Shelly Company recently purchased a Wiz Bang crushing plant manufactured by Astec in order to maintain maximum control of material sizing. "We wanted a very uniform product and utilizing the Wiz Bang to pre-crush the RAP before sending it to the RapSaver is ideal," says Protengeier.

The unit size operating at Shelly is a 48-inch-diameter screw at 24-feet long with a heat exchanger firing potential of 9.3 million Btu's. The unit permits as a hot oil heater, and does not produce odors, or particulate emissions.

A portion of the heated air from the exhaust stack of the heat exchanger is ducted, using a variable speed blower fan, into the head space above the rotating auger and provides continuous "heated sweep air" for removal of the moisture as steam to either the atmosphere or back into the inlet of the thermal oxidizer system, which is a component part of the heat exchanger combustion zone, assuring emissions quality at all operating temperatures and capacities.

"We knew when we saw the test at Carrollton that the RapSaver system had the potential to allow us to pre-heat and pre-dry a portion of our RAP feed stream going in to the 450 tph Astec double barrel plant," says Protengeier.

"We are hoping that RapSaver will boost the overall productive output capacity of the plant but also allow us to consistently run the highest RAP percentage that we can," he says. "It had been very wet during the start-up phase and we have really given the unit a tough run.

"We ran actual moisture samples on what we call our ‘black sand' which is ½-inch and minus material," he continues. "On one day we were at 8 percent moisture, but it's generally been running 6.5, 6.6 and 6.7 percent due to these daily showers we've been getting."

"The steam was flying everywhere and the unit did a good job of keeping up, but that high amount of moisture was clear out of sight," says Protengeier. "We can't ask it to perform to capacity with this kind of moisture during heavy rainfalls, but we still wanted to see how well it did under extreme conditions while we had the opportunity."

Shelly plans to run the unit 10 to 14 hours per day in order to get a good baseline on the system.

"This is the first continuous high production installation of the unit, and we intend to stretch it out," Protengeier says. "If all goes well during the next two months, we're discussing plans to expand the system in 2007 so we can run 200 tons per hour through put capacity to serve more than one area plant.

"The guys at Burke have been great during installation, and the bad weather made it even tougher," he continues. "They are staying with us to complete testing, and gathering of all operating baseline data through the remainder of the 2006 season. If it performs as we think it will, it's going to give us a whole new prospective on the value of recycling RAP."

RapSaver systems are being offered in two different configurations: