Denver's City and County Department of Public Works' Street Maintenance Division keeps a road network of 1,800 centerline miles in good order with its own milling, paving and asphalt production crews. 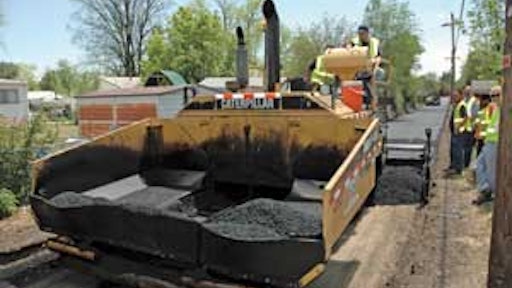 A quick snapshot of Denver's street maintenance operation illustrates just how efficient the road agency is on providing a smooth ride for the taxpaying 600,000+ residents it serves.

With an annual budget of approximately $16 million for street resurfacing and reconstruction, pothole repair, an alley paving and grading, the department operates it own state-of-the-art hot mix asphalt (HMA) plant that churns out over 250,000 tons of asphalt each year containing 20 percent reclaimed asphalt pavement (RAP), mills 115,000 tons of old asphalt annually in its mill and overlay program, along with completing over 1,150,000 square yards of hot in-place work over the past five years, which has saved taxpayers over $5 million in comparison to traditional mill and overlay reconstruction. The department has also implemented an aggressive alley resurfacing program to improve over 1,100 deteriorated alleys, and also promotes a substantial chip seal program to further extend the life of many residential roadways.

While the resurfacing and reconstruction budget is expected to be lower this year, due to some agency reorganization, an intensive full-depth patching program and some assistance the street maintenance department is providing the Denver Police Department, the street department still has a substantial number of paving and preservation projects scheduled.

"Our network is in good condition and we'll continue to make improvements where needed with either mill and overlay or hot in-place, preserve good roads with chip seal application, and continue to work on improving our alleys," says Dan Roberts, P.E., director of the street maintenance division.

And while the division contracts its hot in-place and chip seal work, the cost-savings achieved by producing its own mix for mill and overlay projects, as well as the mix used for hot in-place projects generates close to $1 million annually over purchasing from an outside vendor. The same mix, which is designated as a Metropolitan Government Pavement Engineers Council (MGPEC) standard design (similar to a ½-inch stone Superpave PG 64-22) is used for both mill and overlay projects, and hot in-place projects.

"We purchased our Astec plant seven years ago and we're saving $4.50 per ton on the mix we produce versus purchasing from an independent facility," notes Pat Kennedy, P.E., a senior engineer for the department. "That savings has more than paid for the investment the city made in the new plant. As long as we continue to maintain the plant, it will continue to generate savings."

While a bulk of the HMA produced at the department's asphalt plant supports the mill and overlay crews, which are outfitted with two Cat 565-B mills and two Cat AP-1000B pavers, the flexibility and control the plant has in serving the city's needs bodes well in supporting a variety of street maintenance programs.

With some of this year's organizational changes, Kennedy projects that the department will place 105,000 tons of HMA on mill and overlay projects, 50,000 tons on full-depth patch projects and over 50,000 tons on hot in-place and alley projects.

"We're reconstructing approximately 100 alleys each year and when we began the program several years ago, we identified 1,100 alleys that were in need of repair," Kennedy says. "So we have plenty of alley work to keep us busy in the years ahead."

To handle the alley workload, the department purchased additional milling and paving equipment for crews designated to work specifically on the narrow back streets.

Crews use a 48-inch-wide Wirtgen W-1200 milling machine and a Cat AP-800 paver to navigate the narrow 14- to 16-foot-wide backyard passages, many which have not been tended to in over 20 years and fallen into major disrepair. Prior to paving the alleys, repair efforts were limited to patching potholes, which cost over $1,500 per alley and only lasted for a season.

With most alley projects, 6 to 8 inches of existing material is milled out before 4 to 6 inches of HMA is put down.

"We're not only reconstructing the alleys, but also correcting the height of the road to keep it below the adjacent lots so that it does serve to drain water away from the backyards and into the connecting streets," Roberts says. "We expect the refurbished alleys to last about 15 years, with traffic limited to cars and weekly refuse trucks. So the cost (approximately $6,000 per alley) is a much more economical approach to maintaining the alleys than the annual pothole fix, and homeowners (our customers) are a lot happier with the final results of a new surface versus a patched surface."

The street maintenance division's staff of 190 full-time employees is directly related to the number of personnel required to handle snow removal during the winter. That number also serves the city well in the various street reconstruction projects slated each summer. With a fleet of trucks, used to plow snow in the winter, and the drivers to operate those trucks, the department can easily schedule its hauling needs for removing millings from a project to delivering HMA to that project without worrying about finding independents to do so.

"We're very efficient at what we do and we're always able to keep our people busy," Roberts says. "Even on our contracted hot in-place projects, we still provide the HMA from our plant, so the contractor is never waiting for an independent trucker hauling from an independent plant. We're able to keep our hot in-place contractor moving, and that's good for him, good for us and good for property owners, who know we'll begin and complete work on the street in front of their home that same day.

A photograph in Roberts' office of the city's paving crew in the 1930s is evidence of the fact that Denver has an extensive history of maintaining its streets, and today's street maintenance division continues to fine tune the process.

"We have an infrastructure management system in place to visually inspect all the roads within our network and to constantly update the condition of our inventoried roads; and now we've added alleys to that inventory," Kennedy says. "Typically, seven years after we construct a new road (or a mill and overlay) we apply a chip seal. Then seven years later we apply another surface treatment. The plan is to achieve a 20-year life cycle out of a road before we have to do another mill and overlay, or a full-depth reconstruction. Most of the city streets are only 3 inches of asphalt over a compacted subgrade, so a mill and overlay on those streets is almost a full-depth reconstruction. But if we can get 20 years out of surface, we're happy with that."

Based on software the department uses to manage its street inventory and monitor the condition of those streets, the department has developed a six-year plan to identify maintenance that needs to be performed on the overall network. The software then narrows the focus to streets that need repair within one to two years.

"We've been collecting data since the early '90s and it's helped us to target our efforts on streets in dire need of repair, as well as preserving good streets to extend their life cycle," Kennedy says. "But like in any other political environment, we make sure we're spreading out the work to include all districts, and over a five-year period our efforts are evenly distributed throughout the city."

Kennedy says efforts by an infrastructure task force helped to identify what needs to be done to maintain a good street system and the city council has been supportive of meeting requests, and very supportive of preventive maintenance programs.

With the city's government supporting the street maintenance division's paving practices since the 1930s; it's unlikely any dramatic changes will be made in how the municipality maintains its street network. Roberts and his staff continue to evaluate how to maintain a quality road system within the constraints of the budget the department receives, and while contracting hot in-place, chip seal and larger paving projects makes sense, the department's in-house paving capabilities has proven to be the most cost-effective way of meeting the quality of roads Denver taxpayers are willing to support.