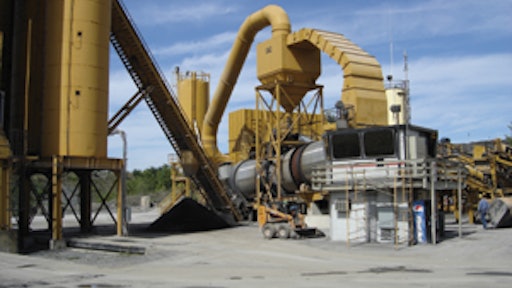 While some businesses may consider too much work a problem, Pennsylvania asphalt contractor Glenn O. Hawbaker Inc. sees it as a good problem to have and recently proved its production crew at the company’s Pleasant Gap Asphalt Plant #1 (located near State College in central Pennsylvania) was up to the task. Glenn O. Hawbaker Inc. operates seven asphalt plants — five drum and two batch plants.

The Pleasant Gap Asphalt Plant #1 has been operating around-the-clock since June 6, except for Saturday nights and occasionally Friday nights. But come Sunday afternoon, the plant is up and running at full capacity.

The original CMI plant was brought on line in 1989 and updated with a new Maxam Drum in the spring of 2004, making it capable of producing up to 500 tph with up to 40 percent reclaimed asphalt pavement (RAP). The Maxam SOLO Drum is 10 feet, 6 inches by 44 feet long with 4 inches of insulation protected by a stainless-steel cover. It’s equipped with the Maximizer Exhaust Heat Recovery System, a new Hauck Eco-II Long Nose Burner that burns mostly recycled oil #5 and natural gas #2, and a new Impulse II Control System. The plant is supplied by five virgin cold feed bins and two recycled feeders with a Tel-Smith RAP Crushing System. Four liquid asphalt storage tans, capable of holding over 110,000 gallons of AC, and six silos, capable of holding over 1,400 tons of hot mix asphalt (HMA), provide the capacity to support four to five paving crews during the day with 2,500 to 3,000 tons of three to four different mix designs, along with the additional production needs of nighttime projects. The plant has been operating two 12-hour shifts, with each shift staffed by a crew of three, plus plant operator Travis Peters.

The Maxam SOLO technology produces exhaust gas exit temperature of only 200 degrees through advanced, high-efficiency flighting, which allows up to 50 percent reclaimed asphalt paving (RAP) content without superheating virgin aggregate, because the RAP is radiantly heated by the burner flame to 300 degrees (hot enough to remove moisture but not hot enough to reach smoke point), and the baghouse outlet temperature is automatically controlled at 225 degrees with the Maxamizer Exhaust Recovery Unit.

The heat recovery system captures exhaust temperatures exiting the drum at 180 to 200 degrees and then heats the gases to 225 degrees with a small burner before they enter the baghouse. This is accomplished with a flighting system that basically over-flights the drying drum to transfer more heat to the aggregate. This technology reduces the CFM and BTU requirements of the system, which translates into increased production of up to 20 percent and reduced fuel costs, as much as 5 to 10 percent per ton.

The Pleasant Gap facility geared up production June 6 when the night paving crew working on the $43-million Centre County portion of Interstate 80 began placing 4,500 tons per night of 37.5mm, 15 percent RAP base course mix. Kurt Ross and his crew placed four lifts of base course (133,414 tons) to construct the 19-inch base for the 7-mile stretch of the highway. Hawbaker’s production and paving crews maintained the aggressive schedule for 20 days, using 24 tri-axle trucks to supply the project, which was located five miles from the plant.

Then on June 26, work on the Union County portion (50 miles from Centre County work) of I-80 began, with crews continuing to work around-the-clock, using 40 trucks per shift to supply the 28,637 tons of 37.5mm, 15 percent RAP base course mix required for the 4-mile stretch of the Union County project. Keeping pace with the two projects required 10 to 15 loads of liquid asphalt every 24 hours. With work well underway on the Union County, Ross’ paving crew moved back the Union County project to Centre County on July 5 to start laying three different lifts — two 3-inch lifts of 19mm intermediate/binder and a 2-inch lift of 12.5mm E (skid resistant) surface course mix — to complete the full 27-inch thick HMA mainline travel lanes of the Centre County I-80 project, setting a shift production and laydown record of 6,027 tons.

While serving the added HMA demands of the night I-80 projects, the plant still had to support four to five paving crews working during the day on other projects.

The Pleasant Gap #1 plant produced over 116,400 tons in June and over 120,500 tons in July, both a record for Glenn O. Hawbaker Inc. August production at the plant came in at 104,734 tons, and the 24-hour pace was expected to continue through September as work is completed on the I-80 projects, with several large commercial projects also scheduled to receive mix from the plant during the month. The plant is expected to produce well over 650,000 tons this year.

Achieving such a demanding production schedule required a total team effort on the part of all company associates working at the plant. Steve Laubach’s quality control lab, for example, ran 161 extractions and sampled 17 different mixes in each of the past three months, along with volumetric testing and aggregate gradations with the company’s 24-hour quarry operation. Brian McLain conducted all the night shift testing. Other plant associates include Scott, Letterman, Todd Armstrong, Dennis Bird, Rick Hahn, Rob Fowler, Becky Batch, and Travis Peters, plant leader.

“We’ve had other jobs in the past requiring us to run around-the-clock, but those projects only lasted a week or so,” Peters says. “This is the first time we’ve had to maintain this kind of production rate for as long as we have. The biggest challenge we’ve faced in maintaining this high production rate has been maintaining a reliable supply of AC (the liquid asphalt cement required for the mix designs being produced over the summer).”

Peters relied on three or four different delivery services to supply the three different grades of AC required for the mixes he was producing at Pleasant Gap.

“It’s a busy time of year to begin with, and our suppliers have other customers they have to serve. So, maintaining a constant supply of the quantity of AC we required to produce the tonnage we were producing was a constant concern,” Peters says.

As for the Pleasant Gap plant, the upgrades have been working well, according to Peters. The new drum, heat recovery system, burner and control system have performed up to the plant operators’ expectations.

And as Glenn O. Hawbaker Asphalt Superintendent Greg Kunes recounts, “We’ve been very pleased with our ability to respond to the production demands placed on our plant team (Pleasant Gap #1) as a result of capacity requirements for the I-80 projects. But when you work in Pennsylvania , you have to have the ability to take on a lot of work during the summer, because come mid-October it can turn cold in a hurry. Our crews did a great job this summer.”
Latest in Asphalt Plants