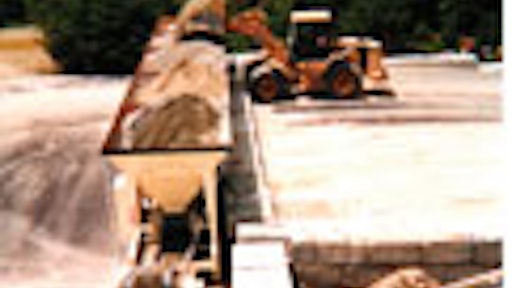 Business expansion is always challenging, but it should be far more about gain than pain — especially if accompanied by solid goals and sound planning. After purchasing his first hot mix plant in 2003, Steve Bevilacqua, owner of Boston-based Bevilacqua Paving, says his company went "from the lamb to the lion." He says they took control of their own destiny. "I know everybody says that, but that is really what happens," says Bevilacqua. "You control everything. The whole entire day is all about the mix — making it your way. It gives us a competitive advantage. Having our own plant allowed us to grow to the next level — to secure our significant market share in residential work, and to expand into road building projects," he says. Since 1998, Bevilacqua Paving has grown from two employees and a few thousand tons per year of driveway paving, to 85 employees and 200,000 tons per year of asphalt produced and applied to both private and public projects.

Bevilacqua knows the economic realities facing paving contractors and asphalt producers. Today's consolidation trend means the big players in a market can squeeze the numbers just enough to keep the smaller guys away from their contracts. Back when Bevilacqua was purchasing its hot mix from its competitor at $30 per ton, his paving company hit a ceiling at putting down only about 20,000 tons per year. "Under those parameters, it didn't pay to expand our tonnage as we really couldn't even bid on certain projects," he says. So Bevilacqua started to examine the latest asphalt plant technology, seeking an affordable option, and one that would help streamline the permitting process.

Bevilacqua Paving purchased a Milemaker 225 asphalt plant, manufactured by Huntertown, IN-based Asphalt Drum Mixers (ADM). This plant is one of a series of ADM portable and stationary counterflow asphalt plants that produce between 160- to 325-tph. Bevilacqua says he looked at this model after learning it was simple to run and only required one loader and operator. He relates that he had first called ADM in 1998 to ask them how many tons he would need to put down in one year to justify buying his own plant. "I asked them for a number and they said that at 30,000 tons I could look at a plant. So that was my goal for the next few years to get to that number," he says. The company hit 30,000 tons in 2001. They took the next year to secure land and permitting. By the time the plant was erected in 2003, they topped 50,000 tons, and then doubled to 100,000 in the plant's first year of operation.

As permitting is one of the most challenging aspects of plant ownership, Bevilacqua wanted to make a plant purchase that would aid in that process. The ADM Milemaker is a dual-drum counterflow design that generates higher production at less cost while eliminating the hydrocarbon pollution source common to other drum-mix plants, say its engineers. In addition, the separate mixing drum ensures that the aggregate, RAP, and other additives and asphalt cement are thoroughly mixed in an environment completely isolated from the drying process and combustion zone. The payback is higher temperatures without the unfavorable emission in the exhaust gases. Any blue smoke generated in the mixing drum is fed around the burner and incinerated in the drum's combustion zone. Bevilacqua also worked with ADM to add a special fume recovery system to the silos, one that takes any fugitive smoke or steam and blows it back into the burner. "So there's no smoke or steam at all coming from the plant. The system just reburns it and eliminates it," says Bevilacqua.

With a background as a certified arborist and air quality engineer, Bevilacqua approached the permitting process with confidence. ADM would also be at the permit hearing to answer any technical questions. Bevilacqua had chosen a site in an industrial area, on a five-acre plot hidden by a thick line of trees.

"You have to show the powers that be why it's a good idea — from a tax revenue standpoint and from an infrastructure building cost standpoint. And you must hit the environmental concerns head on, putting forth more of a concern for the environment than yourself. After all, there are many plants that actually win environmental awards. This new asphalt plant technology is very clean," says Bevilacqua.

"There's definitely a learning curve in operating a plant the first year," says Bevilacqua, who adds that he was fortunate to have hired a veteran asphalt plant operator with nearly 20 years of industry experience. "Our operator, Roland Noury, is a big part of our success," he says.

Plant operator Noury says he has learned to make the plant 'talk,' especially when he's logged one of his 2,500-ton days. As his workday is from 5 a.m. until the day is done, he likes the fact that the ADM plant is very easy to start and very easy to shut down. "After you turn everything on, it's basically two buttons, then light the burner, open the damper on the exhaust, and you're good to go," he says. "I also like the recovery system. There are no leaks or fumes," he says adding that this was the first time he had actually seen a recovery system working on a plant. "The last plant I operated before joining Bevilacqua Paving didn't even have the system connected to the plant. It was just sitting on the ground unattached. Some producers just want to get the plant running. If they know they can cut the recovery system and be operating in two days rather than two weeks, they often just forget about that recovery system," he says.

As to the silos, Noury likes the simplified flop gate system. "Simple is better on these plants. The silos are set up so that it's just a couple of pistons running the whole show — and you're just making an easy switch from one silo to the next. I have three silos and I try to keep one of them open in case I need a special mix," he says.

In most cases, Bevilacqua Paving has structured its operation to make its ¾-inch binder mixes all in one day; and its topcoats or ½-inch road top mixes on other days.

After some months in operation a RAP system was added to the plant. And again, due to the ADM counterflow design, Bevilacqua can normally add RAP to its mixes at levels from 10 to 40 percent.

Presently the Bevilacqua Paving operation consists of 60-percent residential and commercial paving projects; and 40-percent public roadway contracts. "I believe we are the only company in the Boston area that owns an asphalt plant and still does a good share of private work. I did not want to turn my back on a market that we can now really own," says Bevilacqua. "Since we've bought our own plant, we're in a league of our own. We're bidding against guys who don't have their own plant and we're really dictating the market. We're now competitive enough that we can pick and choose the project areas that really interest us the most. That's put us in the driver's seat."