A Solution to the High Price of Diesel Fuel 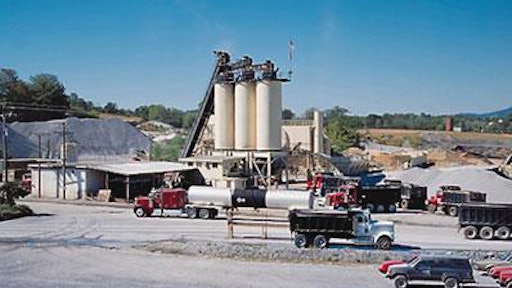 In August 2011, Blalock installed their first OptiBlend system on a Caterpillar C32 at their Sevierville, TN plant. The system was able to reduce the diesel usage by up to 70% in the middle of the electrical load range.

Charles Blalock & Sons, an asphalt producer and supplier in Sevier County, TN, has seen its electrical power costs rising over the past few years. Deriving its power solely from on-site diesel generator sets, Blalock’s power costs are directly related to the price of diesel fuel. With obvious concerns about the rising cost of diesel fuel, they researched alternatives and found Hythane Company in Littleton, CO. Hythane’s OptiBlend kit gave Blalock a solution that provides a 30% overall reduction in electricity costs and a return on investment of less than one year.

The Hythane OptiBlend system is a dual fuel, or sometimes referred to as bi-fuel, retrofit kit. The principal operation of the technology is to burn natural gas in place of diesel, taking advantage of the huge pricing advantage of natural gas. The natural gas, primarily methane, is simply pipeline gas provided by the local gas company, which in this case is Sevier County Utility District (SCUD). Both the diesel and natural gas are burned simultaneously to create the same amount of power as originally achieved with 100% diesel.

The logistics of the system

The modification to the existing diesel generator can be accomplished in one to two days. The natural gas is fumigated into the engine through a custom-designed air/gas mixer mounted between the air intake cleaner and turbocharger. This allows the natural gas to mix completely with the intake air before the combustion chamber. As in any diesel engine, the cylinder compression and diesel injection create the initial combustion, which also ignites the pre-mixed natural gas. While operating with natural gas, the engine is notably quieter and has less vibration. The natural gas combustion provides a more complete and homogeneous burn, leading to lower oil contamination and longer engine maintenance schedules.

In order to achieve the maximum reduction in diesel fuel usage, and to maintain the safety and durability of the engine, constant control of the gas is necessary. This is accomplished through a PLC controller and a dynamic air/fuel ratio throttle. The PLC monitors numerous engine parameters to determine the optimum air/fuel ratio for the engine. Among the signals being watched by the PLC are engine vibration, exhaust gas temperature, electrical frequency, and electrical load.

Since the PLC has a reaction time of 10 to 20 milliseconds and the air/fuel throttle valve can completely open or close in 30 milliseconds, the system is able to respond immediately to changing demands and conditions.This fast reaction time allows the engine to deliver the same performance as it would if it were running on 100% diesel fuel. There is no loss of engine power or governor speed control reaction time when running on dual fuel. Another benefit of this system is that there are no modifications made to the OEM controller. By not altering the controller, it allows the generator set to instantly return to 100% diesel operation if there is an interruption in natural gas supply or other system fault.

If any unusual situation causes a parameter to go out of the calibrated range, such as a high exhaust temperature, the air/fuel throttle will reduce the gas delivery to the engine until conditions return to normal. No operator supervision or system reset is necessary, unless the fault condition persists and causes the system to revert to 100% diesel and completely shutoff the gas supply. The OptiBlend system automatically maximizes the displacement of diesel with gas at any operating condition while still protecting the engine during unexpected circumstances.

In August 2011, Blalock installed their first OptiBlend system on a Caterpillar C32 at their Sevierville, TN plant. The system was able to reduce the diesel usage by up to 70% in the middle of the electrical load range. Across the normal range of plant operations, Blalock is averaging a 50% reduction in diesel usage, which translates into a 35% reduction in power costs. As the price of diesel fuel continues to rise, along with the price of natural gas trending lower, this reduction in power costs will likely improve in the near future.

Based on the success of the first installation, Blalock installed a second OptiBlend system in March 2012 at their Kodak, TN plant. The conversion kit was installed on a Caterpillar 3412 generator set. With this system in place, the plant is able to reduce their diesel usage by up to 65% across the load range of the generator set. Operational savings are greater than 35%, which will provide a return on investment of less than one year.

“These systems have been very beneficial because they’ve allowed us to reduce our operating cost while not sacrificing performance” said William Smith, asphalt manager for Blalock.

They were also able to minimize installation time, since removing the diesel system and installing a dedicated natural gas system would have been very time consuming. The OptiBlend system was installed over a weekend and therefore did not affect the plant production schedule. Dedicated natural gas systems create dependence on a single fuel, leaving the operator without power if the natural gas supply is lost. Using a dual fuel system provides the security of the fuel stored on-site but allows the operator to take advantage of the cost savings of using natural gas.

Aside from the obvious monetary benefits, this project has two other advantages. The first is by using domestically-produced natural gas in place of diesel, Blalock is helping to decrease the country’s dependence on foreign oil. There is also a large environmental benefit to the project. The key emissions created from a diesel generator set, NOx and particulate matter (PM), are reduced by approximately 50% when running in dual fuel mode. NOx is one of the main components in the formation of smog, making this a critical pollutant to reduce. The CO2 in the engine exhaust, a greenhouse gas associated with climate change concerns, is also reduced by about 10%, which is another welcome benefit to the environment.

Although dual fuel technology has been in existence since the creation of the diesel engine itself, the installation of an off-the-shelf system on an asphalt manufacturing plant in Tennessee is a new application. The project could not have been a success without the help of SCUD (Kevin Ford, Marketing Representative), as well as the willingness of Blalock to try this new technology. With the cost savings and emissions reduction that they have seen since the projects began, Blalock is very happy they made this decision.

A Look at Tomorrow's Asphalt Plant