Ramping Up the RAP 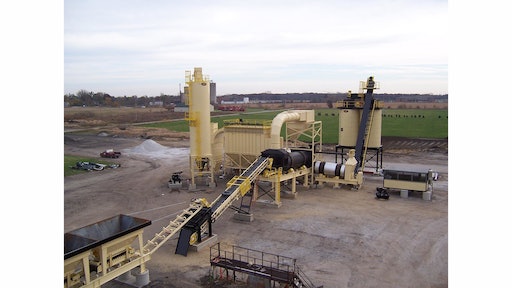 With twice as much asphalt pavement being recycled in the United States than paper, glass, plastic and aluminum combined, the asphalt paving industry has been identified for more than two decades as No. 1 for recycling its product. The Federal Highway Administration says 73 million tons are recycled every year. This environmentally sound and economically beneficial practice helps preserve natural resources and reduce the cost of road construction.

According to the Asphalt Pavement Alliance, “When asphalt pavement is reused in a new asphalt mix, the old asphalt cement is rejuvenated so that it becomes an active part of the glue that holds the pavement together, just like the old aggregate becomes part of the aggregate content of the new mix. These singular properties make asphalt a uniquely renewable resource. The same material can be recycled again and again; it never loses its value.”

Dan is one of the five Urbano brothers that own and manage Babcock Paving (the manufacturing part of the business) and Town & Country Paving (the construction company that does the paving) in DeMotte, IN (pop. 3,814). Rodney is the general manager, John is paving crew foreman, Carmen oversees the maintenance shop and moves equipment around and Mike manages human resources and safety.

Another owner is their mother, Toni, who married Tom Burns, the founder of the company. He started the business in 1982 going door to door with a pickup truck and a shovel selling asphalt driveways throughout Northwest Indiana.

After three years of buying asphalt from others, he purchased the Babcock Paving plant, an older batch facility, in Rensselaer and operated it for 11 years. In the meantime, the company operated a plant in Kentland and later opened a plant in DeMotte. The Kentland location was closed in 2000 and the old plant at the DeMotte location was shut down in fall of 2008. The new plant began operation in April 2009 in DeMotte.

“At the DeMotte plant, we had been using 1960s technology, and with volatile oil and gas markets, we realized that we would either need to get 21st century technology or be passed by competitors,” says Rodney. “We invested several million dollars to build a new Asphalt Drum Mixers (ADM) plant and certified lab to assist customers in designing asphalt to their specifications. The lab was a significant addition to our business. For years we talked about: How could we afford to build and staff one? Today we say: How could we not afford it?”

Although the new plant was built during an economic downturn, the brothers saw it as the perfect time to prepare the company for the future. The modern plant with new technology increased volume (up to 150,000 tons annually) and created plenty of additional activity in the yard. A new wheel loader enabled the company to keep up with the demands of the plant, and do it more efficiently.

Today, recycling has the biggest impact on the success of an asphalt plant, according to Rodney.

“If you are not running recycled pavement through your plant, you will not stay in business,” he says. “On every milling job, we bring back the material to our yard and run it through our crusher and screener to get it down to size.

“By using about 25% reclaimed asphalt pavement (RAP) in our product, there is a significant impact on price,” he continues. “Around here surface asphalt retails for about $60 per ton; recycled material lowers the price about $7 a ton. That price reduction is necessary to be competitive.”

About 90% of the asphalt manufactured by Babcock Paving is sold to its affiliated company, Town & Country Paving. Typically that organization sends out two crews for each job: a prep team to do fine grading and to install the stone base, followed by a paving crew that lays down the asphalt.

Town & Country Paving works for municipal and country governments, the Indiana Department of Transportation, commercial developers and it does a few residential driveways.

“When the housing market disappeared in 2007 to 2008, we expanded our market area and picked up more work from developers and government agencies,” Rodney says. “We have slowly regained where we were 10 years ago. Among our older customers and newer ones, we have earned a great deal of trust so that our repeat business is very substantial. We don’t even have to bid on many jobs because customers know what they are getting from us. We have everything in place to do what we say we are going to do.”

While there are plenty of benefits from RAP, there are some challenges in handling the material. Wheel loader operator Eric Urbano experiences them every day.

“We can have as many as 100 trucks a day bringing RAP to our yard, stacking it in 10,000-ton piles,” Eric says. “The trucks back up a ramp and dump right off the edge. Eventually, the pile becomes the ramp. Just the weight of the trucks driving on the pile causes the material to really consolidate. After the RAP sits in the yard and bakes in the sun for a while the heat glues it back together. It gets very hard.”

When the plant is in full production mode, the broken up RAP needs to be delivered promptly. That’s less of a problem these days since a new wheel loader arrived. The Doosan DL420-3, a 354-hp machine purchased from Ronson Equipment in Lowell, IN, has more than answered the challenge.

“There’s a night-and-day difference in efficiency compared to our previous wheel loader,” Eric says. “I used to struggle to keep up, but the new wheel loader has superior power for breaking up the RAP and the speed to go up the ramp and deliver the material to the plant. It gives us the breakout force to get into the pile and come out with a full bucket. No more wheels spinning. Now I have plenty of time to do the other parts of my job, such as helping my uncle Dan operate the plant and deal with the arriving material. The wheel loader has made my job much easier.”

During the peak season the Babcock Paving plant produces an average of 500 tons per day. That number has risen to as high as 3,000 tons a day.

A critical job for the wheel loader is to bring various stockpiled materials to the seven bins that feed the plant. Each bin has a ramp that the wheel loader has to climb, at times with as much as an 8-ton load in a 5-cubic-yard bucket.

“Going up a ramp with a full load was an important factor we considered when evaluating wheel loaders,” says Rodney Urbano. “We also need power when pushing into piles to pick up material. Without adequate power you cannot drive into a pile, especially recycled asphalt, and fill up your bucket. You don’t want to be going back and forth with half a bucket. This unit provides the power to dig in, load up fully and efficiently go up each ramp.”

Asphalt pavement industry by the numbers