Cliff consults on a tragic accident, warning that diesel and heat don't tend to mix well 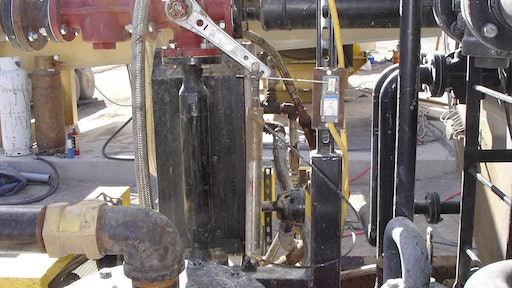 It had been a long day, in a month of long days. The portable drum mix plant had produced nearly 5,000 tons of asphalt since daylight. The operator had shut the plant down and loaded out what he hoped was the last truck of the day ten minutes earlier. He sat at his desk, head down on his forearms, nearly exhausted.

The radio crackled to life. “21 to plant, we’ve got enough mix, go ahead and clean out. Same schedule for tomorrow.”

The plant operator keyed the mike. “Ok, thanks.” He keyed his walkie-talkie and said to his ground man, “Switch the dieseling valves on the asphalt pump and then diesel out the silo.” As he spoke, the operator switched off the asphalt pump. As a warning, what happened next is not for the faint of heart.

The ground man went to the asphalt tank and saw that the pump was stopped. He closed the suction line from the pump to the tank and opened another valve which led to a 55 gallon drum full of diesel. With this done, the ground man climbed the ladder to the silo top and grabbed the dieseling hose installed to allow him to clean the asphalt out of the corners of the silo. He heard the drag conveyor and drum start up as he directed the diesel spray into the corners of the silo.

Inside the control room the plant operator reached down and turned on the ‘inject’ valve to send the diesel to the drum, then started his asphalt pump. Immediately he saw a small puff of white smoke at the drum discharge. It dissipated quickly, but was soon followed by a massive explosion. The blast traveled out the drum discharge, up the drag conveyor and down into the silo where the ground man was spraying the silo with his dieseling hose. He was engulfed in a huge fireball, igniting the diesel in the silo and covering him in flames. He surged back to escape the flames and all but fell down the ladder to the ground. He screamed in agony as the flames seared his skin.

A water truck happened to be making rounds when the driver saw the explosion. Thinking fast, he raced to the plant with his truck and directed a stream of water onto the victim writhing on the ground. The flames subsided and as the water cooled his skin the groundman’s cries diminished. It was a difficult 15 minutes for the groundman while he waited for the ambulance to arrive. At the hospital, the extent of his injuries was realized. He had been severely burned over a large portion of his body. Those burns ended the man’s career; he would be on disability the rest of his life.

The damage to the asphalt plant was also severe. The baghouse was completely destroyed. Down each side of this unit, a 14-in. x 3/8-in. thick beam ran the full length. The explosion blasted these cross-welded beams THREE FEET out of straight. The lids on top of the baghouse landed nearly a mile away. The flames burned away most of the wiring to the asphalt tank, drum and silo. As a result of this accident, this asphalt plant was out of action for many months.

After this tragic event occurred, I was called in by an attorney for the plant owner’s insurance company as part of an accident investigation team. My job was to try and shed some light on what went wrong. Was there a design flaw in the asphalt plant which caused the explosion or did the plant personnel’s actions cause the accident?

The first thing that jumped out at me when I read the accident report was the fact that the plant’s personnel were using diesel in their clean-out routine. Diesel is a very volatile fuel with a flash point around 165° F. Why would you inject it into a 300° F environment such as the mixing chamber of a portable asphalt plant?

To answer this question, we need to understand how the asphalt injection system works on the contemporary asphalt plant. Liquid asphalt is held in a storage tank where it is maintained at an elevated temperature, somewhere around 300° F. If the liquid falls below 270° F, depending on the asphalt, it becomes too viscous/thick to pump. When this happens, nothing short of heat will lower the viscosity enough to pump.

When we want to make hot-mix, we heat our rocks to the desired temperature, then we use a pump to inject the liquid asphalt into the mixing chamber. This process requires a pump and a series of pipes in which the temperature of the asphalt must be maintained above the 275° F threshold we talked about earlier. To do this, manufacturers ‘jacket’ all the oil lines and the pump, then force a heated liquid, heat transfer oil, through the system. At the end of the mixing session, most plant operators simply reverse the direction of the pump rotation which sucks the asphalt out of the lines and the pump.

With this in mind, the question becomes why were these men injecting diesel rather than simply sucking out the oil by reversing the pump? To answer this question I began by examining the asphalt injection system. The first thing I noticed was where the plant personnel had added a 55 gallon drum onto the pump pallet and plumbed it into the suction side of the pump. This was the device the men used to add diesel to the pump and introduce it into the injection system.

This plant was the first drum mix plant owned by this particular company. All of their previous plants had been batch plants. It was a common practice to use diesel to clean out batch plants, so it is not hard to see why the plant personnel would revert to diesel when normal clean out protocols failed.

The causal factors of this accident were now evident. Sometime in the past the asphalt plant had been modified from its factory configuration. During these modifications, a simple oversight led to the necessity to use diesel to clean the asphalt out of the system. This set the stage for the coming tragedy.

The first and foremost lesson that this incident teaches us is that there is no circumstance that diesel should be pumped through a heated asphalt injection system and into the heated, enclosed environment of a drum mix asphalt plant. It’s not hard to imagine the diesel heating up as it travels through the sections of pipe that were jacketed. As it passed its flash point of 165° F the only thing it needs is room to expand and oxygen to turn it into a vaporous cloud of explosive gas. It got that needed room as it was injected into the heated atmosphere of the mixing chamber. The only thing missing was a source of ignition. Perhaps it was a rock caught between a mixing paddle and the floor, or maybe a piece of metal rubbing against another piece of metal. Whatever the source, the diesel ignited catastrophically and peoples’ lives were irreversibly altered.

Are your men using diesel at your asphalt plant? Time to reconsider.

Curtiss Dorr named as the new director of sales & marketing for the GPS asset tracking division at the company.
Libra Systems Inc., a subsidiary of Command Alkon
December 16, 2019
Follow Us