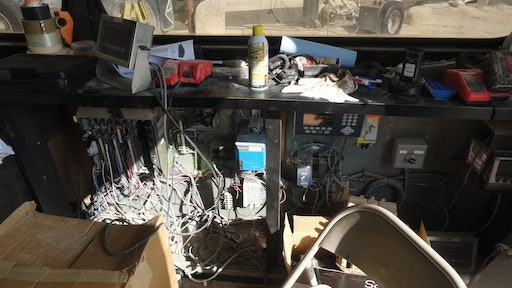 Each year I visit dozens of asphalt plant around America, Canada and overseas, trouble-shooting various maladies from computer issues to burner issues, mechanical problems to electrical issues. After almost 48 years of working on plants, most of these issues are relatively easy to diagnose and repair.

However, one issue is considerably more difficult than all the rest: Electrical issues. In these issues it is important that the technician be able to trace wiring from its source to its destination. Tracing wiring paths is relatively easy in newer facilities that haven’t been altered. However, these problems are exacerbated by the state of the wiring at older plants.

Some electricians seem to know how to tear apart wiring to find issues, but they seem oblivious about how to clean up the wiring after they are done. They rip the wiring out of the factory raceways and conduits, then leave it dangle in the breeze for the next poor sap to try to trace out problems. This makes it a lot more difficult in my opinion.

I have seen simple issues turned into a several day ordeal because when the wiring is no longer protected by the raceways and conduits and the wiring is an easy target for squirrels, rats and mice who all seem to love the taste of wire insulation. Sometime the damage is obvious. But other times it is hidden down in the conduits that run under the control house from the front control cabinets to the rear motor control center.

I was at a plant in Texas this past June where a squirrel had gotten into a main raceway from the front cabinets to the motor control center in the rear and eaten through a 110 volt Control wire ZAPPING himself to death, thus shorting out the control power. To get the plant running again I just ran an external power wire. But that night I needed to get it running correctly. I ended up having to use ‘fish tape’ to fetch his little wormy corpse out of the raceway, then I ran some new wires through it. To prevent the same thing from happening again in the future we filled all the holes that led to the outside world so that none of mister dquirrel’s buddies could get inside them again in the future.

A famous line in a Steven Segal movie was ‘Chance Favors the Prepared Mind.’ The Villain said this right before Segal ended him.

So I decided on a different saying- ‘Success Favors Attention to Detail.’