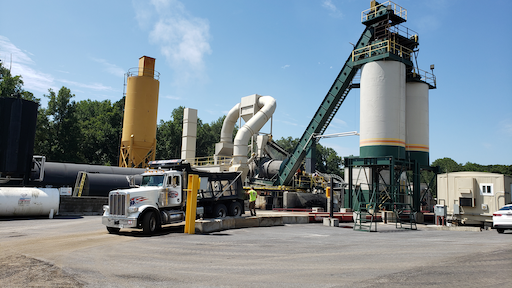 To create Sunbelt's asphalt plant, Reliable Asphalt helped the company source the drum from one place, the baghouse from another place, the silos from a third location and cold feeds and RAP from other plants. The trick was to marry all of this together and supply the missing pieces like ductwork, controls, plumbing components, the heater, etc.

“Atlanta was the place to be to get a job!”

That was the mindset of Spencer McCroskey, owner and founder of Sunbelt Asphalt, when he was in college at the University of Tennessee Chattanooga in the late 80’s. McCroskey and his two roommates moved to the Atlanta area ready to make their mark on the world. He quickly found himself working in the highway construction industry as an estimator. Soon after, he began a road striping business and subcontracted himself for all the estimating. Thus, were the humble beginnings of what is now Sunbelt Asphalt in Auburn, GA.

As his business grew and expanded, McCroskey ventured into other areas of road construction. His paving business soon became the centerpiece of his business plan.

Sunbelt Asphalt was incorporated in 1994 primarily as a paving contractor. Athletic facilities became an area of focus and has grown steadily over the years. As a member of the United States Tennis Court and Track Builders Association, Sunbelt is often the only qualified bidder on many athletic facility projects. From running tracks and tennis courts to paving the parking lots, Sunbelt installs basically “anything but the turf field,” according to McCroskey.  Athletic facilities represent about 1/3 of their business.

In addition to those facilities, Sunbelt’s focus has been on paving everything from commercial parking lots to county road resurfacing projects all over the Atlanta metro area bu McCroskey says they don't do a lot of DOT work.

As the business grew steadily over the years, the company was prompted the idea that perhaps owning their own asphalt plant may be in order.

“When we started paving over 100,000 tons per year, we started thinking about getting a plant,” he says.

Croskey purchased some asphalt plant components at auction shortly after the recession was over in 2012.  He then got in touch with Charles Grote, one of the owners of Reliable Asphalt Products, Inc.  Through their discussions, a plan started developing to build a plant utilizing some of the items that he had already purchased along with other components that Grote could supply.

“I could tell right away that Spencer had a good plan but needed our expertise," Grote says. "He had purchased a portion of a plant at auction but there was a lot more that needed to be done. We began identifying components that could complement some of the items that he had purchased.”

McCroskey began buying those additional items one by one, spreading the investment out over time.  McCroskey commented that cash flow during these types of major investments can be tricky, so buying the components in a gradual manner allowed him to manage his cash more efficiently without acquiring a lot of debt.

By mid-2017, the final plans had been completed for installing the plant, but it wasn't necessarily an easy process.

"We sourced the drum from one place, the baghouse from another place, the silos from a third location, cold feeds and RAP from other plants," Grote says. "Then we used some of the items that Spencer got from auction - the control house, tanks. The trick was to marry all of this together and supply the missing pieces like ductwork, controls, plumbing components, the heater, etc. Coordinating all of this is an area of expertise for Reliable Asphalt Products.”

Sunbelt elected to invest in a new Minds control system to run all these used components.

“I did not want to go into this without investing in state-of-the-art controls," McCroskey says. "I didn’t care what the controls cost, I was going into this with all new controls and all new wiring because if this thing broke, I had to be able to have it fixed quickly."

The coordination between Sunbelt and Reliable Asphalt Products was the key to making all these pieces functional. John Ferguson, one of Reliable Asphalt Products expert controls and electrical technicians, was on-site for almost the entire duration of the installation and plant commissioning project. He facilitated most of the controls installation and was also there throughout the startup for working out bugs and training Sunbelt personnel.

"The biggest challenge was joining some older electrical equipment with the new Minds controls," Ferguson says. "It just took a while to get it all working together but we got it.”

In the late winter and early spring of 2018, Sunbelt’s plant was officially open for business.  As can be expected with a project like this, there were some adjustments to make upon startup. Once things got going, Sunbelt ended up producing roughly 70,000 tons for 2018.

The company also owns and operates three milling machines, so they have plenty of RAP.

“You have to use RAP to compete in our market,” according to McCroskey.  “The Georgia DOT will approve up to 40% RAP.  As we continue to learn our plant, we continue to increase our RAP usage.”

"We used to work all around Atlanta but now, that we own our own plant, we work in a much closer radius and we save fuel, stress on our workers, insurance liability, etc." McCroskey says. "Our quality control is also better because our managers can look at ongoing jobs daily.”

Among other advantages, plant ownership has allowed Sunbelt to control its own destiny.  In order to continue the plant improvement process, Sunbelt has already upgraded to a Vulcan total air burner.

Adam Oliver, Sunbelt’s plant operator, installed a camera in the burner tube so he could see that the burner was firing.

"The burner was so quiet, I put the camera in the tube because I could not hear it when we were running," Oliver says.

Even with the risk of changing the burner out during key production months, McCroskey’s focus is on continuing improvement. This change has already resulted in considerable fuel savings.

In looking to the future, McCroskey strives to create a culture of continued improvement and growth. Over the past 25 years, the company has sustained continued manageable growth and McCroskey wants to raise up young leaders who will eventually take over and continue to carry the torch. Among others, Mark Edger, operations manager and Jason Mulkey, corporate controller, are in position to lead this company going forward.

“If I had to go forward in this business without my key people, I would close shop right now,” McCroskey says.

The root of any succession plan is a plan for success. Sunbelt Asphalt has proven over its history that planning and success are core values of this growing and vibrant organization and that these values will continue for years to come.

Control everything from the asphalt plant to your paving speed with one mobile app
Jessica Lombardo
November 4, 2019

With the increase in the amount of recycled asphalt pavement (RAP) used in modern mix designs, good RAP management practices need to be deployed across the entire production and paving process
Jessica Lombardo
October 7, 2019
Follow Us