Being a Good Neighbor is Always Worth It

With communities developing around asphalt plants, it’s important to control odors and protect the reputation of the industry 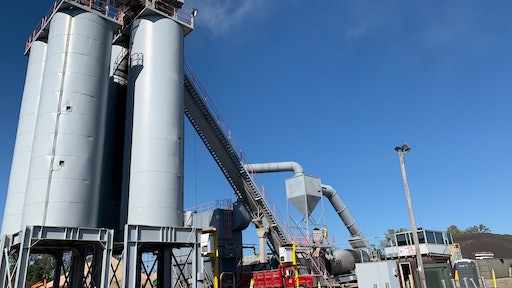 While most of us in the industry love the smell of asphalt, some people don’t. This is especially true for those people who live in neighborhoods where an asphalt plant is located. As communities continue to develop around existing asphalt plants, producers are tasked with finding ways to be a good neighbor and control their asphalt plant odors.

“Asphalt is a super complex mixture of organic compounds containing hydrogen, carbon and sulfates and those compounds smell,” Dr. Laura Haupert, director of research and development at OMI says. “Then at an asphalt plant, you’re heating these elements and anytime you heat something it makes the compounds more volatile. The more heat you add, the more these compounds are going to let off and become even more stinky.”

When the asphalt is heated and vented at the plant, the smell radiates out into the atmosphere which becomes the only thing people smell, giving asphalt plants a bad reputation and causing a problem for many producers.

“If you own an asphalt plant and you have no neighbors around you, nobody's going to care about the smell,” Dr. Haupert says. “But nobody likes a smell for a long period of time, no matter what it is. If you're driving past a bread factory, you'd think that it smells great but if you live next to that every single day, it's going to start smelling terrible. The same is true for asphalt. What we want to do is take any unpleasant odor and eliminate it, making asphalt plants good neighbors for anyone who happens to be near them.”

While many companies have developed ways to mask odor at the plant, only one company has found a true odor control solution. Ecosorb from OMI uses the power of plants to eliminate odors at your asphalt plant, keeping everyone who would be exposed to the smell of asphalt happy. With no smell, there are far less reasons for neighbors to complain, especially about any unwarranted health concerns.

“There's two aspects from asphalt plants that I think people have to keep in mind,” Dr. Haupert says. “One is asking if the asphalt plant is producing enough odors to cause a health concern. A lot of times with asphalt you're in the parts per million or parts per billion, which is still enough to trigger the odor threshold (smell), but that doesn't mean it's dangerous (health concern). Usually, the odors are only nuisances.

“However, if you're a neighbor and you're sitting outside 50 feet away from this asphalt plant and you're trying barbecue and all you smell is asphalt, that might not be the most pleasant. We really need odor control to be good neighbors.”

With the way asphalt plants are designed today, many would say odor is not an issue. However, Dr. Haupert disagrees.

"There are a lot of companies out there that say if you build your asphalt plant the right way and you're capturing a lot of the rogue gases, there is lower  concentrations of odors coming off,” she says. “You can also use a cooler asphalt mix which would produce less odors, but the bottom line is that at the end of the day, there's no way to 100% prevent odors without a custom solution.

“You can lower the odorous chemical compounds concentration so it's not as bad, but the only way to truly prevent it is to use Ecosorb. Even with all your other controls in place, we can find a way to give you the solution you need to remove the odors at the plant before they hit your neighbors.”

The Ecosorb team creates custom solutions based on the needs of each producer. Their team will come to the plant and dive in to find out where the odors are coming from.

“The first key is you have to figure out what's the actual source the odor,” Dr. Haupert says. “Is it the mix coming out of the silos and loading into the trucks or is it at the baghouse or is it coming from somewhere else? In a lot of our solutions, the place we see the most odor is when you're loading and unloading.

“The easy answer there is to add an Ecosorb additive while you're unloading or loading to remove the odors there so they can't even escape as they're going in and out of the truck, before it ever goes down the road and then you don't have to worry about neighbors complaining, because it's already taken care of.”

OMI also offers vapor phase technology/equipment for Ecosorb to aid in stopping odor at the source.

“If you have a large asphalt plant that needs odor control, there are places where we can place our systems to absorb the odors from the plant. One place we could connect the solution is off of the exhaust from your baghouse or a system can be used to go around the vents of large tanks. In addition, we could install a system that would go around the perimeter of the asphalt plant if need be,” Dr. Haupert says. “We’re not just going to say hey, you need all of our systems we have to fix your odor, but maybe you need something for the trucks and maybe you need something for the perimeter of your asphalt plant. We offer many different solutions for many different odor issues and work with the customer to find the best ones.”

And since not every asphalt mixture is created equal, each Ecosorb plant-based solution is custom designed to meet the chemical composition that’s specific to your hot mix needs.

"We have a state-of-the-art research facility where we create all of our custom additives,” Dr. Haupert says. “As part of our custom additive plan, the customer can send us the safety data sheet and we can approve it. Then they'll send us a gallon of their asphalt mix, and we’ll use a Gas Chromatography Mass Spectrometer (GCMS) which will give us the full chemical composition of what's in the asphalt. Then we can start customizing what plant oils we need to remove the odors and we'll come up with a new formulation just for that customer. We then use the GCMS to show the reduction of the odors and create a report.”

“This means the odors coming off are different as well which is why you have to have a custom blend for each type of asphalt,” Dr, Haupert adds. “We could have a customer that has four or five different blends that they have to use, depending on which asphalt they're actually pulling. In addition to that, the crude oils they’re receiving at the source can change too, so every year we might need to make a new custom blend, which just makes it work better for the customer.”

It Doesn’t Cost A Lot to Be a Good Neighbor

As more roads are being built, more asphalt production facilities will be needed and we’re running out of space to put them. While many asphalt plants don’t even think about odor control, there needs to be a shift in mindset in order to protect the reputation of the industry. Many cities are also starting to require odor control at the plant before they approve permits so it’s a good idea to get ahead of the curve.

"It doesn't cost a lot to be a good neighbor,” Dr. Haupert says. “You're going to be using the additive in the parts per million for every load so that's not a whole lot going in and it won’t really add a ton of cost per truckload to be effective.”

The Ecosorb solution is also a safer alternative to some of the other odor control products out there.

“Everything we use in the additive world starts off as a plant,” Dr. Haupert says. “The natural plant oils actually do the odor control themselves which is a big differentiation from our competitors because we're non-toxic, so you don't have to worry about your employee safety while using it.”

Ecosorb also goes one step further by eliminating the odor instead of just masking it with another scent.

And not smelling anything makes everyone happy.

Curtiss Dorr named as the new director of sales & marketing for the GPS asset tracking division at the company.
Libra Systems Inc., a subsidiary of Command Alkon
December 16, 2019
Follow Us