When the second generation of decided to upgrade their asphalt production capabilities in Cocoa, FL, they considered what the third generation would need to be successful 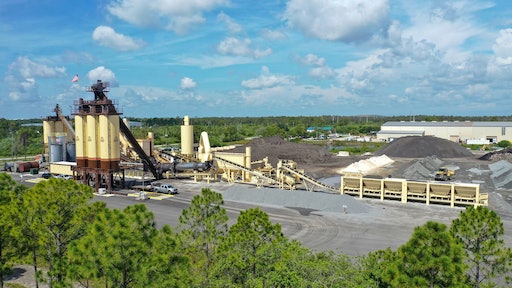 When you talk with Al Mallard, Vice President of V.A. Paving Inc., it’s obvious how much pride and dedication he and his sisters, Debra Mallard, President and Terri Hart, Vice President have in building the successful asphalt paving company their parents, Virginia and the late Arnold Mallard, launched in 1982.

V. A. Paving, Inc.  has two paving crews that generate 80 percent of their revenue and that means the production operation needs to keep them supplied. V. A.  owns enough paving equipment to outfit three crews but like other construction industries it is difficult to find capable workers who are interested in a career in construction.

A straightforward business philosophy, but it’s one that evolved and adapted over the years since the company’s modest beginnings. The company’s goal has always been “to provide a quality product at an affordable price with integrity and professionalism.”

That basic business approach was and is to build a loyal customer base with the City of Cocoa, City of Titusville, City of Melbourne, Brevard County, Melbourne Airport, NASA, U.S. Air Force, and other federal government agencies.

As a woman-owned small business, V.A. Paving focused on work in Brevard County, training personnel to specialize on local, state and federal government construction projects. Within five years of its founding, V.A. Paving Inc. was awarded the coveted John F. Kennedy Space Center, NASA, “Small Woman-Owned Business of the Year” award and became the recipient of that award on four additional occasions.

More paving work soon followed, leading to V.A. Paving’s first plant acquisition in 1990, an 80 TPH portable Astec plant the paving contractor set up at NASA to supply a large project that required an onsite plant. After the job was completed the portable plant was relocated to 800 Cidco Road.

Since then, V.A. Paving purchased a used 1974 Astec Bicentennial 500 TPH plant in 2001 to handle their growing business.

In 2003 V.A. was low bidder for the annual road resurfacing contract with Brevard County to maintain all roads and streets within their network.  The contract is bid every two years, and V.A. has been awarded the contract for the past fifteen years. The county has an aggressive maintenance program that requires 50 miles of roadway to be paved annually. Most are mill and resurface, and some are total reconstruction. One third of V. A. Paving’s work today is tied to the county contract.

In 2015, a hole in the dryer drum of the almost 30-year-plant had to be repaired in the middle of a major project, and that was the beginning of the paving contractor’s evaluation of what needed to be done to continue the company’s growth trajectory.

“We patched up the drum and eventually replaced it the following December through February,” Mallard says.  “Dealing with the drum issues was an indication that we would need to make some improvements to our production capabilities.”

The capacity to produce and pave that much asphalt for one customer (Brevard County) along with the U.S. Air Force and NASA, airport taxiways and runways has led to other major projects for the Florida contractor.

Time for a new plant

After dealing with the drum repair and replacement, V. A. Paving began discussing other improvements with Astec.

“The Astec representatives where supportive of whatever we needed, and were always here when we had a problem,” he explains. “Initially, since we replaced the dryer drum in 2015, we wanted to replace some of the other major components – baghouse, cold feed bins, silos and new control room, but we didn’t want to shut down our operation for more than two weeks at a time.”

Then V A Paving’s Astec representative, Jonathan Brown, came back with a proposal to set up an entirely new plant parallel to the existing plant in order to eliminate any disruption to the production the paving contractor required to supply existing customers and pursue new projects.

At first, Mallard was “taken aback” by the additional expense, but after discussing the option with his sisters, they all agreed it was the best approach to take.

“By deciding to go with an all-new plant, we were able to have new power and fuel lines brought into the facility,” Mallard notes. “But more importantly, we discussed what this would mean to the next generation who would be running this business. We considered the number of sons, daughters and cousins working here, and decided we needed to invest in a facility to meet their needs for the next 20 years. We laid this out so we could add three additional asphalt storage silos when necessary to support our growth.”

“One of the more significant upgrades with a new plant is a state-of-the-art control room,” Mallard states. “A veteran plant operator can run any plant, but new hires, especially younger operators, will be more receptive to newer technology, which in many cases can automatically make adjustments, taking the guess work out of manually adjusting the various functions. This is a major improvement to bring our technology up to 2019-2020 standards.”

As for other significant improvements, the Dillman counterflow drum not only delivers a mix production process familiar to the plant operator, but also a more reliable performance. That performance is also enhanced by the new baghouse capacity. The new plant also provides better recycling capabilities, which is important considering the county road work allows 35 percent recycled in the mix design it requires.

The only components V.A. Paving did not replace were the existing liquid asphalt cement binder tanks. It took three to four days to switch the AC lines from the old plant to the new plant, and upgrades have been made on the oil heating system for the tanks and lines.

“When we look back at the decision to invest in a new plant versus trying to upgrade the old, we realized it was absolutely the best decision we could have made,” Mallard states. “The thought of closing the plant for two weeks at a time to replace one component and then additional two-week shutdowns to replace other components would have cost us $15,000 a day just in lost asphalt mix production. But more importantly for the 60+ employees who count on V.A. Paving’s success, the investment we made really positions our company for continued growth.”

Curtiss Dorr named as the new director of sales & marketing for the GPS asset tracking division at the company.
Libra Systems Inc., a subsidiary of Command Alkon
December 16, 2019