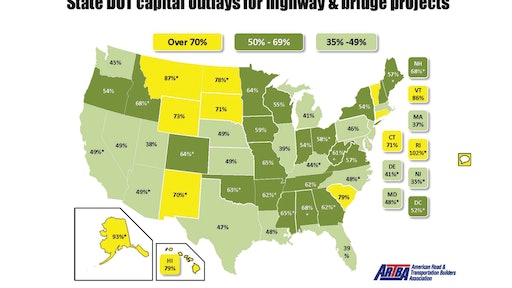 Testifying before the Environment & Public Works Committee, ARTBA President Pete Ruane told senators that federal highway funds account for nearly 52 percent of state roadway and bridge capital outlays annually. Eleven states rely on the program for 70 percent or more of their road and bridge capital improvements, and 20 states rely on federal reimbursements for 50-69 percent of their capital outlays. For the remaining 19 states, federal investment accounts for 35-49 percent of their highway construction activities.

“Although the amount of reliance on federal funds for needed road and bridge improvements may vary state by state, it is clear that for the vast majority of states the effectiveness of their highway construction programs are heavily dependent on a strong and reliable federal partner,” Ruane said.

According to a July Congressional Budget Office (CBO) report, the HTF would be unable to support any new highway and transit investments in fiscal year 2015.

“We should be clear that the continuing saga with the Highway Trust Fund’s solvency is not the result of runaway spending,” Ruane said. “In fact, federal highway investment is less today than it was in 2011.” The root cause of this problem, he said, is not declining HTF revenues, either. Revenues from the federal gasoline tax, diesel and truck taxes have returned to their pre-recession levels and the CBO projects continued moderate growth in trust fund revenues over the next 10 years.

“The simple fact is the user fees that generate the Highway Trust Fund’s revenue stream have not been adjusted for 20 years,” according to Ruane. “As a result, the trust fund has limped along from insolvency crisis to insolvency crisis since 2008.”

He warned that if federal highway and transit investments fall off the cliff, state governments would likely slash their highway construction programs, allowing roads and bridges to deteriorate. Tens of thousands of jobs would be eliminated in the construction and supplier industries, further weakening a U.S. economy that is being kept afloat by the Federal Reserve.
Given the current situation for highway and bridge contractors, further decline in the market would have dire consequences, Ruane told the panel. He pointed to ARTBA economic data showing the amount of real pavement work is on pace to decline eight percent in 2013, and the real value of work on highways and bridges has dropped 30 percent since 2009. Average employment by highway and bridge contractors through July 2013 is also down 16 percent compared to pre-recession levels.

Ruane noted that if Congress continues the recent practice of transferring resources from other parts of the budget to the HTF, it will have to add $135 billion to the federal deficit over the next 10 years or shift $135 billion from other governmental activities to the trust fund. “Neither of these approaches are sound fiscal or economic policy,” Ruane said.

He called on Congress to finish the job started with MAP-21’s policy and program reforms by generating new revenue streams to bolster the HTF. “The lone remaining impediment to delivering the national transportation network the American people and the U.S. economy need is a long-term stabilization of the Highway Trust Fund’s revenue foundation.”