Survey: 80% of Americans Would Support Tolls

New HNTB survey finds nearly 80% of American drivers would back tolls to fund transportation if it meant safer, faster travel 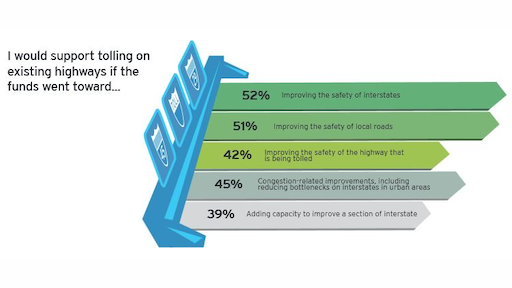 More than 8 in 10 Americans (83%) would endorse tolling on existing highways, motivated by improving the safety of interstates (52%), local roads (51%) and the highway that’s being tolled itself (42%).

According to the survey, more than 3 in 4 (79 percent) Americans would support the addition of a toll on a non-tolled surface transportation facility if it resulted in a safer, congestion-free and more reliable trip. In fact, 83 percent would support tolling on existing highways. They would be motivated to use toll roads more if the funds were going toward improving the safety of interstates (52 percent), local roads, bridges and highways (51 percent) and the highway that’s being tolled itself (42 percent). Others would approve tolls on existing facilities if the money went toward congestion-related improvements, including reducing bottlenecks on interstates in urban areas (45 percent) and adding capacity to improve a section of an interstate (39 percent).

Even tolling existing interstates, which traditionally have been free of tolls, is backed by more than 4 in 5 (78 percent) Americans if the funds collected would solely go toward improving that particular interstate.

“Tolling is becoming the solution of choice for generating additional user-based transportation revenue,” said Jim Ely, HNTB chair toll services and senior vice president. “It’s a proven source of funding that’s being seriously considered for expanded use by cities, states and even the federal government with support from elected officials across the political spectrum.”

Earlier this summer, the Obama administration proposed a new federal transportation authorization, the GROW AMERICA Act, which would allow the secretary of transportation to grant states a waiver from the prohibition on tolling general purpose lanes on segments of interstate highways. If such a proposal were enacted, it would be the first time general purpose lanes could be considered for tolling since the original Federal Aid Highway Act was passed in 1956.

“Inflation, improved fuel economy, changing driving habits and rising construction costs have eaten away at the purchasing power of federal and state gas taxes,” Ely said. “The national survey suggests that many Americans agree that when it comes to fixing our Interstate system, improving trip reliability and reducing accidents, all funding sources, including tolls, should be on the table for consideration by America’s transportation leaders and policy makers.”

The survey also found many Americans would prefer electronic tolling on interstates via transponders (41 percent) versus video (30 percent) or mobile phone apps (22 percent).

Among drivers, 4 in 5 (81 percent) are willing to pay a toll, with the desire to get to their destinations more quickly being a primary motivator, such as when having access to an alternate, tolled road provides them with a faster travel time (60 percent) and less traffic (54 percent). More than half (51 percent) would pay tolls if they were able to drive on high-quality roads.

“Today’s toll lanes are safe, fast and efficient,” Ely said. “Technological advancements make toll booths a thing of the past, with cars, buses and trucks moving at highway speeds under gantries armed with electronic devices and video cameras that can read transponder signals and license plates.”

Among regular interstate users, there are a range of aspects that are important to them regarding these facilities, which are central to the movement of people, goods and services across the country. That includes quality of pavement (93 percent), ease of access (92 percent), reliable travel time (89 percent) and clear signage (87 percent). In fact, over 3 in 4 (77 percent) regular interstate users would support tolls on existing interstate if it meant that these important conditions were improved.

Fairness and convenience are key

When it comes to how drivers should be charged for tolls, 1 in 4 (25 percent) Americans think it’s fair to charge a price from point-to-point, and about the same amount believe fares should be set for driving in certain types of lanes (23 percent) or specific times of the day (23 percent), while others think dynamic (22 percent) and cordon (21 percent) pricing are fair ways to toll.

Ely said dynamic pricing via priced managed lanes has powered much of the nation’s most recent tolling expansion, such as the 495 Express Lanes project in Northern Virginia. Priced managed lanes are tolled or “express lanes” operating in the middle of non-tolled – or even already tolled – highways. Their popularity has grown over the past 10 to 15 years as departments of transportation have looked to convert underutilized carpool lanes and get the most out of that existing capacity. The price to use these tolled lanes varies to ensure that cars can maintain a speed of at least 45 miles per hour and customers are guaranteed a predictable, congestion-free trip.

More than half (53 percent) of Americans said it is appropriate to convert general purpose lanes to priced managed lanes when additional lanes are needed to relieve congestion. And more than 1 in 5 agree that it’s okay to do this when the roadway is at the end of its design life and must be reconstructed (23 percent) or when there are under-utilized high occupancy vehicle lanes (22 percent).

Ely said interest is evolving to encompass other congested stretches of highway beyond HOV lanes, as well as looking at the potential development of entire priced managed lanes systems in major metropolitan areas, such as San Francisco and Miami.

Ely stressed that while they can generate revenue in certain situations, the primary goal of priced managed lanes is congestion relief, not to create additional transportation funding.

Texas is a tolling leader

With IBTTA’s Annual Meeting in Austin next week, HNTB also took a look at the public’s views on tolling in the Lone Star State.

Texas has toll roads in many major metropolitan areas, including Austin, Dallas and Houston, and more than 10 million active toll transponders. Like the nation as a whole, the state is facing an avalanche of transportation funding needs. Ely said the Texas Department of Transportation and regional toll authorities are using tolls and toll roads to manage congestion and add capacity that otherwise would have taken decades longer to get from the drawing board to the construction site.

Close to 3 in 4 (73 percent) Texans who regularly drive on roads or bridges with tolls are pleased with the value they receive for the fare paid. Fewer drivers on toll roads or bridges across the nation (65 percent) are satisfied with the value they get for the toll they pay. In fact, more than 4 in 5 (85 percent) Texans also could be influenced to use toll roads more often. A top motivator for those who could be influenced to use toll roads more in reaching their destination more quickly, including if the toll road made their travel time faster and more reliable (73 percent) or if it helped them avoid traffic (71 percent). Improving infrastructure also is a driving force, as nearly half (49 percent) would use toll roads more if they knew the money was going toward a worthwhile transportation cause, such as roadway repairs, new roads or improved local public transit.

And close to 6 in 10 (59 percent) would be pushed toward these routes if the fare was lower. Texans want the toll-paying process to be convenient when traveling outside of their area. More than 4 in 5 believe that if they have an electronic toll tag, it should work in other states in their region (86 percent) or nationwide (84 percent).

Public transportation usage could go up if tolls were in place. Nearly 3 in 5 (56 percent) Texans would be more likely to choose riding a bus if they were an option on a toll road and it meant a safer, congestion-free and more reliable trip.

More than 1 in 2 (55 percent) Texans would support tolls as part of a transportation project’s funding if there are insufficient funds from other sources. But even with the advent of increased tolls, many Texas residents are split as to whether or not they should have to pay tolls anytime they drive on a toll road (51 percent), rather than just when the toll road saves them time (49 percent). In fact, the latter is true, the former is not. Ely said additional education could help address that issue.

However, more than 7 in 10 (72 percent) Texans think toll agencies should put drivers on probation or fine them for skipping on the fares they are supposed to pay. In fact, more than half (55 percent) think toll authorities should collect fines from offenders, and on average, those who think fines should be collected say a $34 fine sounds about right.

About the national survey

HNTB’s America THINKS national tolling survey polled a random nationwide sample of 1,090 Americans Aug. 21-28, 2014. It was conducted by Kelton, which used an e-mail invitation and online survey. Quotas were set to ensure reliable and accurate representation of the total U.S. population ages 18 and over. The margin of error is +/- 3 percent.

About the Texas state survey

HNTB’s America THINKS Texas tolling survey polled a random sample of 1,046 Texans Aug. 22-29, 2014. It was conducted by Kelton, which used an e-mail invitation and online survey. Quotas were set to ensure reliable and accurate representation of the total U.S. population ages 18 and over. The margin of error is +/- 3 percent.