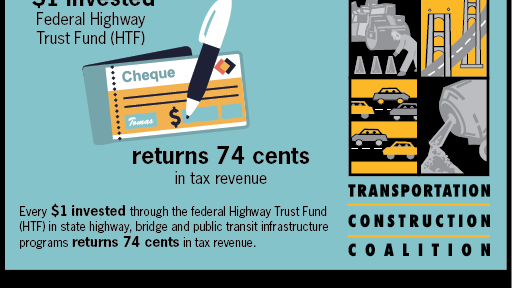 The 31 members of the Transportation Construction Coalition (TCC) today announced the launch of a social media campaign to press Congress to find a permanent fix for the federal Highway Trust Fund (HTF) before the current authorization for highway and public transit funding expires May 31.

TCC members will be using their respective social media networks to release one infographic a day from March 16 to 27 that contains a key finding from new research conducted by IHS Global quantifying the economic impacts of the federal surface transportation program.

The campaign will be augmented with digital advertising focusing on road users across the country, members of Congress and their staff, and print advertising in Capitol Hill publications that will run during the TCC Washington Fly-In, April 14 to 15.

The IHS study, “Transportation Infrastructure Investment: Macroeconomic and Industry Contribution of Federal Highway and Mass Transit Program,” found that 70% of the economic benefits, or value-added, of federal HTF investments in transportation improvements occur in non-construction sectors of the economy. Among the sectors that benefit the most are service industries such as business, education, health and leisure, and hospitality.

IHS also studied the resulting impacts from 5% annual increases in federal highway and transit investment from 2014-2019, and concluded the added investment would:

The TCC, which commissioned the study in 2014, said it would send it to all congressional offices the week of March 16 so members of Congress can better understand the value of transportation investment, and the urgency to find a long-term sustainable funding solution for the HTF so that states have the resources they need to improve roads, bridges and public transit systems.

The IHS study and infographs can be found at: www.transportationconstructioncoalition.org.