With the clock running down, Congress has made little progress and is "failing the American people", says AED Chairman Don Shilling 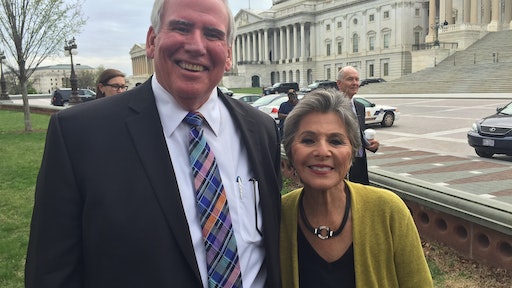 AED Chairman Don Shilling joined Sen. Barbara Boxer (D-Calif) today on Capitol Hill for a press conference aimed at getting all of Congress on the same page to put aside partisan bickering and create a multiyear surface transportation funding bill.

When it comes to infrastructure, Washington, D.C., is failing the American people, said Don Shilling, chairman of the Associated Equipment Distributors (AED), at a Capitol Hill press conference today. Shilling is president of General Equipment & Supplies, a heavy construction equipment dealership based in Fargo, ND.

The event was organized by Senate Environment & Public Works (EPW) Chairman James Inhofe (R-Okla.) and Ranking Member Barbara Boxer (D-Calif.) to remind their congressional colleagues that authorization for federal highway spending expires at the end of May and that the Highway Trust Fund (HTF) will run out of money late this summer. With the clock running down, Congress has made little progress on how to pay for a new multiyear bill and restore the HTF's long-term solvency.

"It's difficult to put into words just how frustrated AED's members are with Washington," Shilling said. "Watching from a distance, there seems to be unlimited time for partisan bickering but not enough time to do the people's work." Shilling thanked Inhofe and Boxer, saying they were rare exceptions who were working hard and collaborating across party lines to keep Congress focused on the need to fix the HTF.

Shilling noted that Congress' failure to fix the program has real-world economic consequences. "Federal road and bridge spending creates about $2.4 billion in demand for construction machinery each year and directly supports about 4,000 equipment dealership jobs nationwide," he said. "All that economic activity - and the livelihoods of those 4,000 families - is in jeopardy as Congress once again waits until the last minute to kick the can down the road."

Shilling said that AED members have one message for lawmakers: "You were sent here to govern, so get to work! Put aside your partisan differences, roll up your sleeves, compromise, fix the HTF, and pass a fully funded, long-term highway bill.

"The men and women of the construction industry are standing by to build the roads, bridges, and transit systems America will need to compete and prosper in the 21st century," he continued. "But Congress needs to do its job before we can do ours."

Shilling pledged that he and his equipment industry colleagues would keep up the political pressure "until Congress gets the job done."