ARTBA: Time for Congress to Take a Cue from Founding Fathers

ARTBA is using the 228th anniversary of the U.S. Constitution signing to remind Congress that Article One, Section Eight, makes support for transportation infrastructure investment a core federal government responsibility. 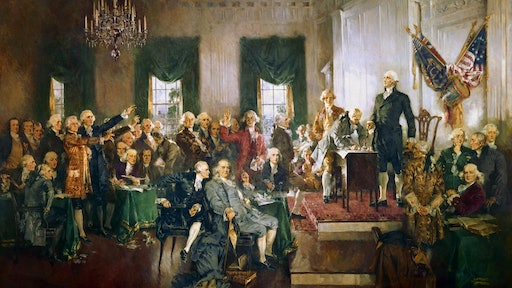 On Sept. 17, 1787, delegates to the Constitutional Convention in Philadelphia signed the document they had created. The American Road & Transportation Builders Association (ARTBA) is using the 228th anniversary of the U.S. Constitution signing to remind Congress that Article One, Section Eight, makes support for transportation infrastructure investment a core federal government responsibility. It’s time, ARTBA says, for Congress to fix the Highway Trust Fund.

“It only took the Founding Fathers 209 days—from a call for action on Feb. 21 to the signing ceremony on Sept. 17—to draft, debate and endorse the U.S. Constitution, one of mankind’s greatest documents,” ARTBA President & CEO Pete Ruane says. “In contrast, why have our elected leaders taken over 2,000 days since 2008 trying to figure out how to permanently address the Highway Trust Fund revenue problem?”

Hamilton said: “The improvement of the roads would be a measure universally popular. None can be more so. For this purpose a regular plan should be adopted, coextensive with the Union, to be successfully executed, and a fund should be appropriated sufficient… To provide roads and bridges is within the direct purview of the Constitution.”

Madison noted: “Among the means of advancing the public interest, the occasion is a proper one for recalling the attention of Congress to the great importance of establishing throughout the country the roads and canals which can best be executed under the national authority. No objects within the circle of political economy so richly repay the expense bestowed on them.”


Franklin challenged legislators: “And have we not all these taxes too… and our provincial or public taxes besides? And over and above, have we not new roads to make, new bridges to build… and a number of things to do that your fathers have done for you, and which you inherit from them, but which we are obliged to pay for out of our present labor?”


And George Washington, who presided over the Constitutional Convention, said: “The credit, the saving, and the convenience of this country all require that our great roads leading from one public place to another should be straightened and established by law… To me, these things seem indispensably necessary.”