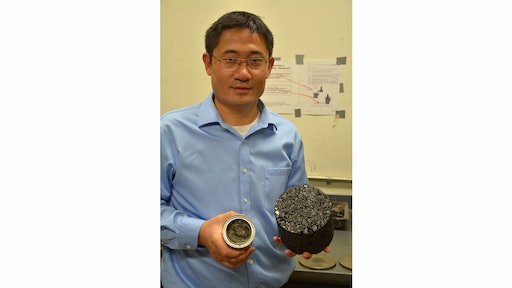 When it comes to going green, the asphalt industry has been a front-runner in finding ways to make their product a more sustainable and less expensive resource. Now, thanks to a researcher at Washington State University (WSU), the familiar fossil-fueled-based product is getting even greener.

Haifang Wen, assistant professor of Civil Engineering in the WSU Department of Civil and Environmental Engineering, has developed a technology to substitute restaurant cooking oil for the crude oil used traditionally in the production of asphalt, creating a sustainable bioasphalt that looks and handles just like its petroleum-based counterpart.

Wen grew up in a rural area of Shandong province in eastern China. In his youth there were not many paved highways in the Chinese countryside.

“Lots of the roads were gravel,” says Wen. “They were muddy when it rained. I remember riding a cow on them or going along in a wagon pulled by a donkey.”

Living in those conditions, he could see room for improvement in road materials. “I thought, ‘We can do better,’ ” Wen says.

Thus was born Wen’s interest in asphalt. The asphalt used in roads has traditionally been made from aggregate – small particles of rock – and products made from crude oil. When crude oil is refined, it produces a variety of products including light fuels like gasoline, heavier plastics and also dense asphalt.

“Every year in the U.S., we use about 30 million tons of asphalt binder for roads, more if you include roofing shingles,” Wen says.  “It’s easily a multi-billion dollar business. Only in the last decade has the green asphalt industry started coming together.

“But the price of asphalt made from crude oil is pretty high, about $700 to $800 per ton,” Wen adds. “That really adds up. One lane of a highway, paved for one mile, costs about $1 million.”

Asphalt binder accounts for about five percent of the final hot mix asphalt (HMA) that’s laid on the roads.

“Building roads is a big investment in taxpayer money,” he says. “In general, a one-mile road in a rural area costs at least a million dollars to build. With the waste cooking oil technology, we can reduce the cost of asphalt binder to under $200 per ton, making road building much cheaper.”

HMA has to be tough and reliable, able to withstand the ravages of heavy trucks as well as the extremes of Mother Nature. In Wen’s lab, they are using waste cooking oil instead of petroleum as a binder, which is a win-win for both industries. Restaurants can be spared having to pay to have their waste fat hauled away, and with free raw materials, the asphalt made from waste cooking oil is more economical.

Each component of bioasphalt is subjected to a series of rigorous stress tests, such as intense heat, freezing temperatures, compression and loading. Bioasphalt is grey, rather than black and Wen says that sometimes you can even smell what the restaurant was frying in the oil when you smell the bioasphalt product.

After four years working with a chemist and “adjusting the recipe,” Wen is confident that his green, sustainable asphalt is as good as the old-school petroleum asphalt. “I am very excited to have patented a solid technology,” he says.

All of which has the undivided attention of both federal and state highway agencies. Wen has been collaborating with both and says the industry is “very interested and eagerly awaiting the roll out of (his) product.”