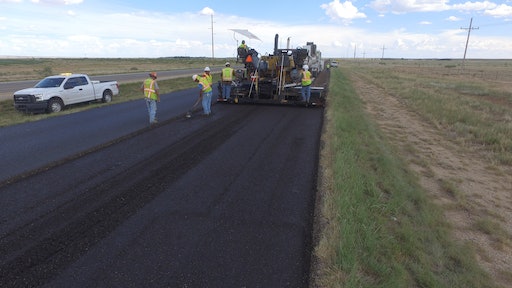 The state of New Mexico has a long history of cold in-place recycling (CIR) beginning in the early 1980s. Until 2000, CIR projects were commonplace in New Mexico with over 150 total or about 10 annually projects. These historical projects were 100% reclaimed asphalt pavement (RAP) with a milling depth between 2- 5 inches. Four inches was the most common depth, to which an overlay was applied. Following AASHTO thickness design procedures, a layer coefficient of 0.35 was assigned to the recycled layers. A minimum of 15 years of service was expected from these sections.

R. Gordon McKeen published an evaluation of 45 of these projects in 1996. Very favorable results were reported in terms of construction and maintenance costs, environmental impacts, and most importantly performance compared to both mill and inlays as well as simple overlays. Yet, despite this very positive history, only sporadic use of CIR has occurred in New Mexico since 2000.

A re-recognition of the positive history of CIR occurred within New Mexico DOT (NMDOT) after a 2014 conference and a committee was formed of NMDOT and industry personnel with the stated goal of developing a special provision for future CIR projects. The special provision “Cold In-situ Recycling (CIR) of Existing Surfacing – Section 415-A” was produced and subsequently approved in 2017 by NMDOT. Transition to a standard specification was accomplished in the “2019 Standard Specifications for Highway and Bridge Construction.”

In 2018, the NMDOT contracted with Fisher Sand and Gravel – NM Inc. to employ CIR technology to over 11 miles of U.S. Highway 285 north of Roswell, NM. Only the southbound lanes were a part of this project.

The average annual daily traffic is about 3,500 vehicles with a design equivalent single axle loading of over 4.5 million. CIR was selected for this project as it offered a solution that would meet the structural needs of the roadway while minimizing the opportunity for reflective cracking due to having most of the existing cracks obliterated by the recycling process.

"After they cored the roadway, they decided that CIR would be the best candidate for the roadway due to the distress it was exhibiting," Darren Coughlin, president of Coughlin Company says.

Site evaluation of the section included the collection of a total of 41 cores, approximately one every 1/4-mile. These were measured for their thickness and evaluated for stripping, air voids, the mixture type, delamination/tack coat and the asphalt was recovered for further testing. Core thicknesses ranged from about 7.5 to 12 inches of total asphalt. Twenty-one of the cores showed moisture damage. Cracks that were cored showed mid to full-depth cracking. A visual distress survey was also performed which identified transverse, longitudinal and isolated areas of block and alligator cracking.

The final design cross-section was set as a 4-inch CIR section, overlayed with 3.5 inches of Superpave III mix with a PG 70-28 binder, topped with a 5/8-inch rubberized open-graded friction course with a PG 70-28R+ binder. Workers milled and removed 3-1/8 inches of existing pavement using a Roadtec RX-900 RotoMill prior to the recycling process. This value was adjusted subsequently in the field to two inches due to thinner than expected locations, especially along the shoulders.

Coughlin Company served as a subcontractor to Fisher for the CIR portion of the project. HollyFrontier supplied the CIR emulsion. Three percent by total weight of mix of CIR emulsion with a base grade of PG 64-22 was recommended by the approved mix design. It was anticipated that 2% water and 0.75% of Type IV cement recycling agent would be added as well. No field changes to mix design were needed as the test section went well.

The CIR section was subsequently placed by Coughlin and properly compacted. The compaction train for the CIR consisted of two 14-ton double-drum steel wheel rollers for initial breakdown, followed by two 16-ton pneumatic rollers in the intermediate position and a 14-ton double-drum steel wheel roller operating in static mode for the finish rolling. The rolling pattern established was: breakdown – four passes, intermediate – eight passes, and finish – one pass. The rolling pattern remained relatively unchanged throughout the project and the average density obtained was 99% of the test strip density. Coughlin company completed the CIR portion in 11 working days.

The tack coat material was a SS 1H emulsion diluted 50/50 and applied at a rate of 0.10 gallons/square yard and allowed to break prior to paving with the Superpave III. The paving process went very well and no issues were noted. Substantial project completion was October 2018 and project closeout occurred in November. In terms of costs, the CIR amounted to about 30% of the total paving cost or about 18% of the cost of the total project.

"The CIR process recycles the existing asphalt in place so there's very minimal import and export of materials," Couglin says. "Typical savings over conventional methods is about 30 to 35% and a lot of that savings comes from the elimination of logistics."

The return of CIR technology adds one more outstanding tool in NMDOT’s arsenal for the maintenance/rehabilitation of their asphalt pavements. Excellent historical experiences with this technology as well as wise recognition of recent improvements have NMDOT looking to once again use CIR more frequently.

Currently, there are several CIR projects scheduled for the 2019 and 2020 seasons. The rebirth of CIR in New Mexico is destined to prove itself once again in the Land of Enchantment as it did in the 1980s and 1990s. Welcome back!

James Gallegos, P.E. is a Materials Engineer for NMDOT. Dave Johnson, P.E. is an Asphalt Institute Senior Regional Engineer based in Montana.

Use hotmix year round with the KM T-2 Asphalt Recycler
KM International
October 9, 2017
Follow Us