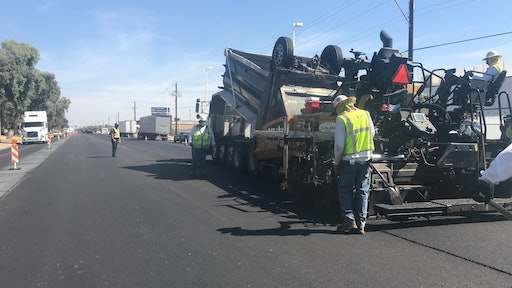 As the fifth largest metro in the U.S. with a population of more than 4.8 million and 1,400 miles of paved roads, the city of Phoenix, Arizona conducted its first ever recycled asphalt pavement (RAP) overlay pilot project on a laned road in October 2020.

Historically, the city and the road construction industry haven’t explored the benefits of RAP on laned roads given misconceptions of its performance and a lack of shared research.

All of that changed when the team at Solterra Materials, a Phoenix-based asphalt mix company, presented a compelling case to the city that it was time to roll out a trial section to demonstrate what they already knew.

The City of Phoenix admits they have been slow to adopt RAP because they hadn’t had the opportunity to really analyze its properties first-hand until Solterra Materials shared their findings. Based on those initial lab results, the city understood that RAP used in conjunction withrejuvenator, was the best option and gained the confidence needed to move forward with the pilot program.

Solterra Materials, working with the city and its street transportation department, as well as input from the Arizona Department of Transportation, set out to demonstrate the benefits of RAP on city streets (beyond use for dust suppression in alleys and road shoulders), a first for this large metro market.

Using Cargill’s Anova® Rejuvenator, the City of Phoenix can now realize cost savings and environmental benefits including a reduced need for virgin materials, minimized energy use and a reduction in greenhouse gas emissions.

Because Arizona asphalt is extremely stiff and brittle, Solterra looked at a number of rejuvenator types (fatty acids, vegetable oils, petroleum-based and vegetable oil blends) to see which application provided the best results. It was determined that Cargill’s engineered vegetable oil-based Anova® Rejuvenator, with a slight asphalt grade bump, was the most effective.

Following extensive lab evaluation of RAP properties at 10%, 15% and 25%, a nearly one-mile test section of the heavily-trafficked arterial Buckeye Road, just west of downtown Phoenix, was selected for the pilot program. Solterra worked closely with the Cargill team to dial in the right Anova Rejuvenator dosage, producing 2,300 tons of hot mix for the surface course containing 20% RAP.

“The mix with Cargill’s Anova Rejuvenator performed the best compared to all of the other mixes and costs less,” said Pat Weaver, president of Solterra Materials. “Today’s bio-based chemistries actually restore the RAP binder’s rheological and other damaged properties while adding many other performance benefits.  These benefits include reduced compaction temperatures up to 45o F, lower VOCs, low volatile mass loss and enhanced low temperature cracking resistance.”

Lab testing showed that the 20% highly-aged RAP with the correct dosage of Anova Rejuvenator performed as well as virgin mixes.

The mix delivered a 10% cost savings and overall performance indicators are also showing positive results, including flexibility index increase from 12 to 18.5 as measured by the I-FIT. The laydown contractor on the job shared that it was very easy to place, handle and compact.

“The mix with the rejuvenator handled well, was very easy to place and behaves like any standard warm mix asphalt. It’s awesome,” said Weaver. “I have been working with Cargill since we started our business 2.5 years ago and this project experience did not disappoint.”

Performance to date has prompted the city to compare its current surface mix against the 20% RAP version and will continue to make plans for expanding this with future paving.

“After several months since it was paved, we’re seeing strong results in terms of performance with no cracking or rutting,” said Weaver. “I’ve personally driven on the road several times and it’s great. This is encouraging as this section is in a heavy industrial zone, so we see it holding up even better on residential streets.”

The city quickly realized the benefit and further potential of incorporating more RAP into its paving work moving forward. After seeing the performance first-hand and analyzing the initial results, it was evident to civic leaders that they have been missing out on key benefits such as reducing the need for virgin materials, reducing energy use at the mix plant, minimizing landfill space and greenhouse emissions as well as cost savings to local taxpayers.

Based on these initial results, the city has adjusted its spec to include more RAP and has plans to expand this in the future. The performance, cost and environmental benefits made it a clear decision to incorporate RAP as part of its standard paving strategy for the future. In April 2021, they plan to test even more road sections around the city with RAP to reinforce those early findings.

By being proactive in sharing industry best practices like using Anova Rejuvenator and being transparent with its mix development and testing, Solterra Materials was able to shift perceptions and begin to grow trust with a once skeptical audience.

“I believe the City of Phoenix is sold on it and is looking forward to seeing performance results in about six months to determine a longer term strategy with RAP,” said Weaver.