Testing requirements of HMA during the construction process 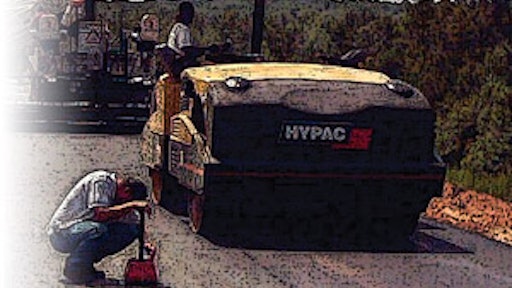 Over 500 million tons of HMA are placed in the United States each year so it's important that the material be properly sampled and tested during construction to ensure satisfactory performance. When adequate testing is not conducted the performance of the HMA normally suffers.

There are several tests used during construction to help ensure adequate quality is produced. However, prior to beginning work in the field a mix design has to be developed and approved. The mix design provides a job mix formula that is used as the target for material and mixture properties during mix production. The tests discussed in this report include: aggregate gradation, asphalt content, volumetrics and in-place density.

Mix design
The mix design is developed before the project begins. The mix design evaluates the materials and determines the mixture proportions for optimum performance. As a result of the mix design, a job mix formula (JMF) is produced. The JMF tells how much of each aggregate source to use in the mixture and the optimum asphalt content. It also provides a target for the percent of the aggregate passing each size range. The mix design is really a starting point, and it is important to understand that during production the mix design will likely have to be adjusted.

Most mix designs are now conducted in accordance with the Superpave procedures and criteria. The primary component of these tests is to compact the HMA using some specified compaction effort and determining the volumetric properties. These same tests are typically conducted during the construction process.

Aggregate gradation
There is disagreement about the importance of the aggregate grading on performance. But there is no disagreement on the importance of uniformity in the produced grading. Most specifications will have a gradation band that the contractor will have to meet as the HMA is produced. For HMA, a dense graded mixture is typically used. This plots as a straight line on 0.45 power plot that most laboratories have. The densest grading will be a gradation that falls on top of the maximum density line. When the grading is on top or near the maximum density line, there may not be sufficient voids in between the aggregate properties (VMA) in the compacted mixture to allow for sufficient asphalt to be added to the mixture. The grading will often need to be above the line or below the line to provide sufficient VMA to allow for some minimum desired asphalt content.

Another test that is widely used is the solvent extraction method. A sample of asphalt mixture is placed in a solvent and the asphalt is removed from the aggregate. This allows the amount of asphalt to be determined. One problem with this method is that it requires the use of hazardous solvents to conduct the test, so many state DOTs have begun to use other methods.

During the construction process asphalt content tests will typically be measured 2 to 4 times per day depending on the rate of mix production and the testing requirements.

There are two test results that are used to determine the air voids in the mixture. The first is the bulk density of the compacted mixture, which is determined by weighing the sample in air and then weighing while submerged in water and calculating the bulk density. The other property that is needed is the theoretical maximum density (Figure 3), which is the density at which there would be no air voids. A sample can not practically be compacted to zero air voids but the number can be determined from the theoretical maximum specific gravity test which basically measures the weight of a loose sample and the volume of asphalt and aggregate in the loose sample. Dividing the weight of the mixture by the volume of the aggregate and asphalt will provide the theoretical maximum density.

Another mixture property that is important is the VMA. The VMA is a measure of the voids in between the mineral aggregate particles in a compacted mixture. This can be determined form the bulk density of the sample, the bulk gravity of the aggregate, and the asphalt content. When the VMA is too low, enough asphalt can not be added to produce a durable mixture. So setting a minimum VMA is an approach that is used to ensure that adequate asphalt is added to the mixture.

The third mixture property that is important is the amount of the VMA that is filled with asphalt. Generally the voids filled should be high enough so that the mixture is not permeable to air and water and not so high that bleeding and rutting occur under traffic.

All of these volumetric tests are measured during the production of HMA. All of the calculations require that a number of tests be conducted including: bulk density of compacted sample, bulk gravity of aggregate, and asphalt content.

In-place density
Once the HMA mixture is placed it is essential that it be compacted to some desired density. If the density is too low the mixture will be permeable to air and water and durability will be an issue.

Two types of tests are normally used to measure compaction. The first is to cut cores (Figure 4) from the in-place mixture and measure the bulk density by weighing in air and water. This is the most accurate test but it is destructive.

Typically both types of tests (destructive and non destructive) are used to some extent on a project.

In summary, there are a number of tests conducted during construction of HMA. It is important that these measured properties be within the specification requirements so that satisfactory performance can be assured.