Special Report: Lab Technology — How to Build an HMA Lab

Here's what you really need. 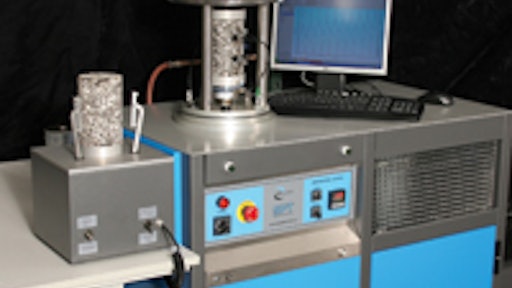 Liberally borrowing from Tony Stewart's sponsor — You can do it. This article can help.

No, I'm not going to load up this article with a lot of NASCAR references in hopes that you'll keep reading. I'm hoping that if you've made it this far, you'll stick with me until the end. Some of what you read may be old news, but maybe you'll find a few nuggets that will help.

It sounds simple, but you need to know what kind of lab you're trying to build before you get started. Do you need a lab that is just capable of doing routine quality control work or do you want a design lab that can develop mix designs and evaluate mixtures for warranty work? The equipment will be similar between the two types of labs, but the design lab might have more and different types of equipment.

Regardless of the type of lab, there is some common equipment that any lab needs. For example, you'll need a variety of putty knives, spoons, scoops and gloves for handling asphalt mixtures. Paint cans and lids — quart and gallon — can be used for collecting samples of the liquid asphalt binder for testing (quart) or storing mix and aggregate samples for future testing (gallon). Baking pans of various sizes (such as 11" x 17") can be used for drying aggregates or heating/conditioning an asphalt mixture sample. A hot plate or propane torch is good for heating tools prior to use. Cleaning rags, solvent (such as mineral spirits), butcher paper, WD-40 – you'll figure out the miscellaneous stuff as you get into it.

Two other common items that need a bit of attention are scales and ovens. At the least you'll need a good scale capable of handling up to 10 to 12 kilograms with a precision of 0.1 grams. You'll need this level of precision if you're doing any mix testing to determine volumetric (air voids) properties. Unless all your testing is component analysis testing (determining asphalt content and gradation), then you'll also need a water bath with a heater and small pump/circulator like you'd find in an aquarium.

In virtually any lab, even a brand new one, it is an accepted fact that you never seem to have enough storage space or enough ovens. I'd recommend springing for at least two ovens up front. Forced draft ovens capable of up to 400 degrees F with a precision of 5 degrees F should be sufficient. This will allow you the flexibility of having one oven set for drying (230 degrees F) with the other set for heating asphalt mixtures.

To perform volumetric analysis on an asphalt mixture sample, you'll need two main pieces of equipment: a compaction device and a vacuum pycnometer (for determining the maximum theoretical specific gravity of an asphalt mixture sample). The lab compaction equipment of choice for most labs in the United States is now the Superpave gyratory compactor (SGC). There are several types and manufacturers of SGCs. The choice of which SGC to purchase comes down to a number of factors including price, user friendliness, and portability. Many labs have elected to use the smaller, more portable SGCs such as the Pine G1, Brovold, and Troxler 4141.

In addition to the SGC and a few molds, I'd advise purchasing a mechanical mixture simulation device for calibration of the angle of gyration. Of all the factors influencing the compaction of an asphalt mixture specimen in an SGC, the angle of gyration is, without a doubt, the most important. At low angles of gyration — such as the 1.25-degrees specified from the research — very small changes in the angle can significantly affect the density of the compacted specimen.

Additional research by the Federal Highway Administration, University of Arkansas, and others has found that compliance in the SGC frame causes the angle of gyration to be less inside the mold during compaction than if it was measured externally. A mechanical mixture simulation device such as the Hot-Mix Simulator (HMS) or Rapid Angle Measurement device (RAM) simulates the loading that occurs in an SGC when an HMA sample is being compacted. As a result, the internal angle of gyration can be measured without the need of an HMA sample.

If you're testing cores for density, you probably should consider purchasing a CoreLok or CoreReader. The CoreLok is a vacuum sealing device that seals the specimen in a thick polymer bag so that it can be weighed in water for a more accurate determination of the percentage of air voids in the specimen. The CoreReader operates using gamma ray technology to determine the air void content of a compacted asphalt mixture specimen. Unlike the nuclear density gauge, the CoreReader has no restrictions on use and operation because of the extremely small amount of radioactive material used in the equipment.

I'll skip the details of equipment for component analysis testing. Just know that you'll need a mechanical shaker and sieves to determine gradation and a means to determine asphalt content. Most commonly this is done using solvent extraction equipment, nuclear asphalt content gauge or ignition oven.

Performance testing equipment, such as the simple performance tester (SPT) may be something that a lab will have in the future, particularly if the lab is involved in design-build projects. Getting the SPT is only part of the battle; you'll also need a core saw and drill to make test specimens out of SGC-compacted specimens. The rest of the battle is learning how to use the equipment and analyze the results. This is probably the part that scares some folks and makes the concept of performance testing less attractive. Loaded wheel testers such as the Asphalt Pavement Analyzer (APA) and RutWheeler are also alternatives for evaluating a mixture's potential to rut.

Finally, most contractors will probably steer clear of asphalt binder testing equipment in their labs. But there is one piece of binder test equipment that is easy to use and may have some value at the plant. The rotational viscometer can be used to check asphalt viscosity at mixing and compaction temperatures. This can provide a quick check to see if the viscosity of your asphalt is consistent. A significant increase in viscosity can cause compaction on the road to become more difficult leading to additional compactive effort by the rollers to achieve the same density.

Mike Anderson is the Asphalt Institute director of research and lab services.

The Asphalt Institute has recently acquired the Simple Performance Tester manufactured by IPC Global and marketed in the US by InstroTek. This equipment is capable of conducting dynamic modulus (stiffness) and repeated axial load testing at a range of temperatures and loading frequencies. Dynamic modulus testing provides information on an asphalt mixture's stiffness at high temperatures (where rutting is a concern) and intermediate temperatures (where fatigue cracking is a concern). Data from the dynamic modulus test can also be used in pavement design software to determine the appropriate thickness of asphalt pavements.

The repeated axial load test simulates the pulse loading and rest periods that occur on an asphalt pavement under traffic. Testing is conducted at high temperatures to evaluate the deformation that occurs under load. This can be directly related to the rutting an asphalt pavement may experience. Please contact AI's laboratory operations manager Gary Irvine (girvine@asphaltinstitute.org) for more information on how to have your asphalt mixture evaluated using the simple performance test equipment at the Asphalt Institute.

For more information on the equipment discussed in this article, visit: