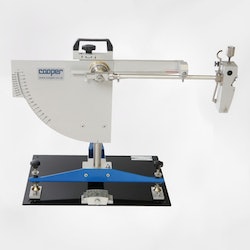 The Cooper Pendulum Skid Tester ‘CRT-PENDULUM’ is a skid resistance testing instrument that measures the frictional resistance between a rubber slider mounted on the end of a pendulum arm and the test surface. This provides highway engineers with a routine method of checking the resistance of wet and dry surfaces to slipping and skidding, both in the lab and on site.

Based on the Izod principle: a pendulum rotates about a spindle attached to a vertical pillar. At the end of the tubular arm a head of known mass is fitted with a rubber slider. The pendulum is released from a horizontal position so that it strikes the sample surface with a constant velocity. The distance travelled by the head after striking the sample is determined by the friction of the sample surface. A reading of Skid Resistance is then obtained.