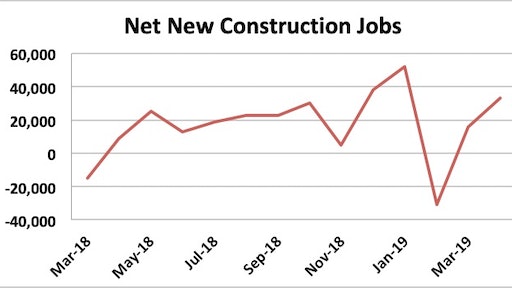 The construction industry added 33,000 net new jobs in April, according to an Associated Builders and Contractors (ABC) analysis of data from the U.S. Bureau of Labor Statistics. Compared to the same time last year, industry employment is up by 256,000 jobs, an increase of 3.5 percent. 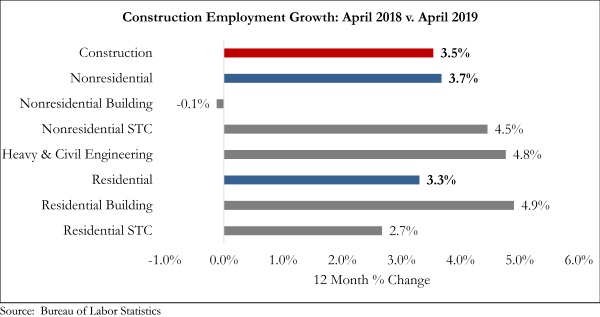 Overall, the construction industry unemployment rate fell to 4.7%, down 2.2 percentage points from the same time last year, which represents the lowest April rate since the series began in the year 2000. The national unemployment rate for all industries fell to 3.6% in April.

"Many economists are predicting a recession in 2020 or 2021,” said ABC Chief Economist Anirban Basu. “While that’s possible, the case for an economic downturn over the next 12 to 18 months is fading fast. The nation has added jobs in 103 consecutive months and the unemployment rate is at its lowest level since 1969. With inflation and interest rates low, the cost of capital remains suppressed, helping to induce ongoing spending growth among companies, consumers and governments alike. Corporate earnings remain strong, and today's employment report indicates that many remain firmly in growth mode.

“For construction firms, today's jobs report is consistent with lengthy backlog, continued expansion in consumer outlays, growing demand for office and other forms of space, and steady demand for construction services,” said Basu. “As contractors continue to struggle to identify and afford talent, average hourly earnings for construction employees increased by 0.4% from March to April, approximately twice the rate of growth observed across all industries. That said, construction wages have expanded at a slightly slower rate than all industries over the past year, increasing by 3.1%."