US construction industry fueling increased 1.9% year-over-year in March; down 0.9% versus previous month 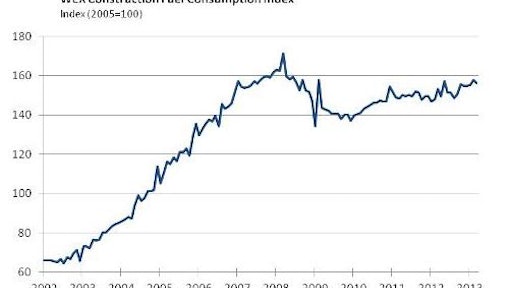 The FCI indicated a positive year-over-year growth with an increase of 1.9% but a decrease of 0.9% from the previous month.

WEX Inc., a leading provider of corporate payment solutions, in collaboration with IHS, a leading global source of information and analytics, released results of its WEX Construction Fuel Consumption Index (FCI), which indicated an increase of 1.9 percent in March versus its level at the same time the previous year.

The WEX Construction FCI measures national fuel consumption statistics for the construction industry, which provides an accurate and up-to-date indication of construction activity in the United States.

WEX worked with IHS, Inc. to capture and analyze transaction data from its closed loop network, which includes over 90 percent of the domestic retail fuel locations. With this data, the WEX Construction FCI can be used to identify emerging trends within the construction industry and the national economy.

The indicators were tested at monthly, quarterly and annual frequencies, with the greatest insights produced using the year-over-year percent change of the monthly data. For March 2013, the WEX Construction FCI reported that fuel consumption by U.S. construction companies increased 1.9 percent versus March 2012 and decreased by 0.9 percent versus the previous month.

US Construction Industry Fueling Up 1.5% in February

Last month’s WEX Construction FCI reflected the continued year-over-year growth indicated by the seasonally-adjusted index in most of the government’s subsequent construction data releases. Construction spending excluding improvements – a good measure of activity – rose by 1.3 percent in February and private residential construction also increased in the same period by 3.3 percent. February housing permit statistics were promising, with total permits increasing by 4.6 percent and housing starts ticked up by 0.8 percent in February, to an annual rate of 917,000.

Total construction put-in-place, which is released a month later than the WEX Construction FCI, increased by 1.2 percent in February.

In March, the construction industry added 18,000 jobs after gaining 49,000 jobs in February, which is the industry’s sixth consecutive double-digit monthly increase.

US Construction Industry Fueling Up 1.5% in February