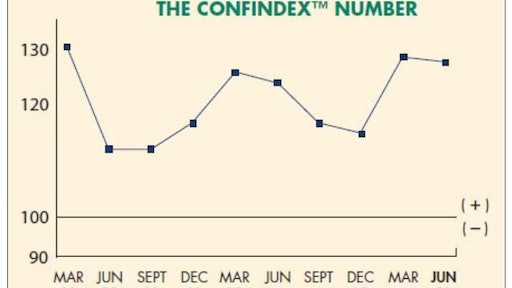 In sympathy with broader economic trends, construction industry CFOs have started off recent years with a healthy dose of optimism and a bright outlook for construction spending growth. But after repeated quick starts, the broader economy and the degree of optimism have been tempered by the emergence of bad news over the course of a given year, whether in the form of debt ceiling fears, nervousness regarding tax and spending policy, financial crises in Europe or other parts of the world, or disappointing stock market results.

Based on results from the second quarter CONFINDEX survey, 2013 is shaping up to be another year during which elevated optimism is gradually replaced by renewed caution. The overall CONFINDEX fell 0.8 percent during the second quarter from 129 to 128. The index is still up 3.2 percent from a year ago, however, which is consistent with expectations for continued gradual construction industry recovery.

While every CONFINDEX sub-index expanded during the first quarter survey relative to year-end 2012, two of four sub-indices declined during the second quarter, one went unchanged, and only one actually increased. The Business Conditions Index declined 2 percent, falling from 147 during the first quarter to 144 during the second (but is up from a reading of 138 a year ago). The Current Confidence Index was unchanged for the quarter and still stands at 121, up from 119 a year ago. The Financial Conditions Index expanded a modest 0.9 percent during the quarter, rising from 115 to 116. A year ago, this sub-index stood at 111. Perhaps most importantly, the Year-Ahead Outlook Index fell from 139 to 137 during the quarter but is still 5.4 percent higher than the reading a year ago.

This is not to suggest that confidence is collapsing – simply that it has plateaued for the time being. CFOs remain relatively less concerned about the level of construction service demand or the amount of financing available to take on and complete projects. Rather, to the extent that nervousness persists, a variety of public policies serve as principal focal points, including expressed concerns regarding the Patient Protection and Affordable Care Act and a lack of transparency regarding the public sector’s commitment to infrastructure investment going forward. The number of respondents watching the policymaking environment with an elevated level of concern surged 37 percent from Q1:2013 to Q2:2013. One respondent indicated that “The ever-growing regulations are now more than just a nuisance,” while another noted that, “Agencies are difficult to deal with.”

As with the prior quarter, another significant source of concern is the availability of skilled labor. Already, skills shortages have emerged in many construction segments, including perhaps most prominently in the nation’s oil and gas industry. In fact, skills shortages in construction remain the single most prevalent concern among industry CFOs, with 53 percent of survey respondents reporting that they are either very concerned (38 percent) or highly concerned (15 percent) about current and/or prospective skills shortages. Another 37 percent are watching with some concern while only 10 percent are not concerned at all.

CFOs report that changing demographics inducing a number of workers to leave the industry is perpetually rendering worker recruitment more problematic. Respondents report that few younger workers exhibit an interest in construction work and that many lack a basic level of training necessary to fill current openings. According to one respondent, “Our ability to train them will be instrumental in our level of success.”

The level of concern regarding construction demand continues to decline, albeit gradually. During the second quarter, 27 percent of construction executives reported that they are either very concerned (20 percent) or highly concerned (7 percent) regarding construction demand, down modestly from the first quarter when 29 percent of respondents were either very or highly concerned. One can accurately characterize CFOs as cautiously optimistic, with one respondent indicating that, “The economy is still in a fragile state and could easily slip back into recession. There is still a lot of cash on the sidelines as many are unsure of the future.” Another respondent short-handedly stated that the economy “seems better at present, but the future is still uncertain.” Still another indicated that “The market is improving, but it doesn’t appear to be a strong market yet. There is still some challenge to building momentum and having a consistent flow of signed contracts/backlog.”

One of the areas of meaningful improvement in recent years has been the availability of financing for construction projects. A relatively small proportion (19 percent) report that they are very (15 percent) or highly (4 percent) concerned regarding financing availability, while 61 percent are watching with some concern and 15 percent are not concerned at all. During the prior survey, 26 percent of respondents were very/highly concerned, and prior to that, 37 percent were. The improvement in financing conditions does not entail a rush of industry activity, however. As one survey participant noted, “Bank lending is getting better, but owners aren’t willing to pull the trigger on many projects.”